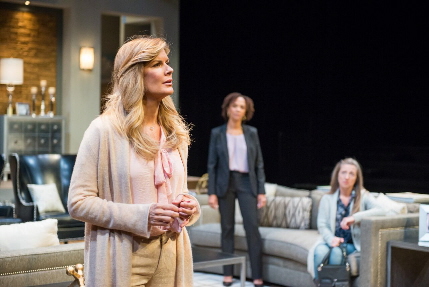 There’s something thrilling about seeing a world premiere play unfold. And when the playwright is one of South Florida’s great hopes to get an original play to the Great White Way, there’s even more of excitement in the air to see his latest work.

That was the energy that prevailed over the production of Michael McKeever’s After at Zoetic Stage – the playwright’s 25th full-length play. His work, Daniel’s Husband, which had its world premiere at Island City Stage last year, will be produced off-Broadway next spring.

With After, McKeever presents a microcosmic view of parenting, perceptions and the unpredictable nature of why bad things happen to seemingly good people. In the course of 90 minutes, we’re taken through a slice of life spanning two years in the worlds of the Campbells and Beckmans.  A text sent by a 17-year-old boy to his classmate has created a war of the words between two suburban families.

When After opens, Julia Campbell (Mia Matthews) is trying to track down her husband, Tate (Tom Wahl), who is late for an in-home appointment with another couple. At first, it’s possible that Connie and Alan Beckman (Jeni Hacker and McKeever) have been invited over for a discussion about real estate. But as things evolve, we discover that the situation is more personal.

Kyle, the Campbell’s 17-year-old son has sent a bullying text to a classmate, the Beckman’s son, Matthew. Kyle has been given a three-day suspension, but the Beckmans feel this isn’t a proper punishment. The Campbells perceive the text as a “boys will be boys” prank, but Connie Beckman is adamant — she feels that the threat looms much larger.

There’s an undercurrent here, too. The once-close family friends have drifted apart – “Your kids grow up and you lose a whole circle of friends,” says Julia. Now hurled back into each other’s lives, the gloves are off and everyone has a stake in the game. There’s long-harbored jealousy and judgement. There’s an undercurrent, too, of what is perception and what is reality.

McKeever begins his play with a light touch. Hacker, who never fails to deliver comic flair, has the lion’s share of the quick dialogue early as Connie. Left alone in the Campbells’ living room with her husband, she can’t help but comment on a taxidermy deer head that’s a can’t miss, centered high above the mantle. Nearby is a case full of rifles housed in a cabinet. “They display guns like I display my grandmother’s Lalique,” she scoffs.

The playwright also finds comic relief in the character of Val (Karen Stephens), another former close friend who, too, has slipped away from the fold since her divorce. “I got the house and the kids and Audi.” Julia has invited Val for the afternoon meeting as a sort of mediator.

Like any good playwright, McKeever uses dialogue and his characters’ convictions to drive home POV (point of view). For Tate, the Beckmans’ badgering about the text is part and parcel of an overly sensitive politically correct society, while for his wife, Julia, the attack is a direct hit on her worth that she finds in motherhood. For Connie, she’s taken issue with what she believes has been an easy ride for the perfect Julia. “Her entire existence is a Michael Kors ad,” says Connie. Now, with a son that’s showing imperfections, this is Connie’s time to show everyone that Julia is real – warts and all.

Alan does a deep dive on perception and how people see things the way they want. “Perception is based on instinct and its instinct that keeps us alive,” he tells the gang after a particularly heart-pounding display.

Val is in the middle of both worlds, facing real life as a single mother and taking  care of her own mother who is dying. She’s living part of her son’s dream: He wants to get into Dartmouth, she tells everyone within earshot on more than one occasion.

The strong cast has all the right motives, each creating an individual dynamic that helps carry the investment that a dialogue-heavy drama likes this needs. While the group has to work as an ensemble, they also have the task of developing individual characters. McKeever gives them the tools and the capable actors fill in the emotions. And emotions run high – each character is given their space to spar, to sob, and to rattle one another’s cages.

The challenge here is that there is little actual action; the events are mostly conveyed through conversations. Only once is there an actually startling event that actually creates a feeling of drama. And while there are ways to successfully manage tension completely through dialogue, try as everyone might, After has a difficult time reaching its fever pitch.

The one-act has three separate “movements” – before, during, and after – but fadeouts in between disrupt the continuity. As much as this is a think piece, perhaps a complete blackout would leave the audience left to ponder what has just transpired. The soundscape moves the audience to reflection, but there’s distraction (stagehands gently move props) as we’re thrust out of the mood then put back into the action when the lights come up.

After is dramatic on many levels and one could see it as a star vehicle especially because of the strong female lead character, which Matthews plays with a strong subtlety that stirs on so many levels. Hacker as her nemesis reveals, step by step, a woman who has lost her own sense of self in her role as a mother. Stephens is the perfect middleman, trying to keep the peace. It’s probably the most difficult role since the character is trapped between the two worlds. Wahl as the arrogant Tate is able to find the fine line needed to be believable when the character needs to soften and show a compassionate side. McKeever as Alan is the sturdiest of the bunch, delivering theories on perception vs. reality that make you question your own points of view.

Michael McClain’s realistic set design creates the tone of the play before even a word is spoken. It provides an interesting aspect of twos: two leather chairs, two couches, two vodka bottles, two urns, lays out a contemporary living room, which creates an Us vs. Them dynamic right off the bat.

Stuart Meltzer’s direction pulls it all together, allowing for McKeever’s play to breathe, including a few long, quiet passages that are given their due. “After” has its share of predictability and it needs a bit more action to make it a masterpiece. Where it succeeds, however, is at its dramatic emotional core of conflict and how differing views create each individual’s reality. And that’s a part of human nature that never changes.