A Peek Behind The Throne: Making The Audience 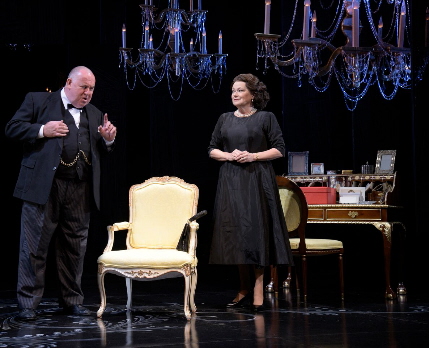 For 60 years, Queen Elizabeth has been beloved, despised, served as a role model for some and a target for others, but always been the somewhat removed iconic image of unflappable composure and of serene grace.

Invested supposedly by God with her right to royalty yet limited in her actual power by the British Constitution, she has had to navigate triumph and tragedy with inner reserves.

But other than waving from carriages and addresses to the nation, her maneuverings as monarch and her inner emotions whatever they may be have all been contained behind stone and mahogany walls.

Playwright Peter Morgan, after taking on the well-documented clash between Richard Nixon and David Frost, kicked his imagination into high gear
to produce The Audience, an ingenious way of exploring what may or may not be the woman beneath the fur-lined robes and tiaras.

This fall, the Maltz Jupiter Theatre kicks off its new season by peeking behind those velvet curtains in the 2013 play cataloguing what Morgan thinks are the many facets of the “real” Elizabeth.

The conceit is to watch Elizabeth in the private meetings she actually did have on a weekly basis with a long series of elected prime ministers ranging from Winston Churchill to David Cameron.

But since this is theater, Elizabeth played by Boston-based Karen MacDonald is seen at varying periods going back and forth along the time line with Elizabeth jumping from age 25 to 90. MacDonald changes wigs and costumes in full view of the audience and relies on acting rather than extensive makeup. The externals aren’t the point, the internal life is.

For MacDonald, it’s an opportunity to plumb the depths of someone so public yet such an enigma. “What a chance to dig in underneath the skin of someone,” the actress said. “When you think of it, she’s been the Queen of England since I was born. She has been a kind of constant presence. Even though she is not part of our world in a particular way, she’s been a part of our lives.”

MacDonald marveled: “She’s still there. She’s travelled hundreds of thousands of miles. She takes her duty very seriously (to the point) that it is a religious duty. Her destiny is that God chose her to be queen — in bizarre circumstances since her father was not supposed to be king,” because of his brother’s abdication.
“But this is her job for her natural life.”

Director Lou Jacobs added that the result is a theatrically poetic evening. “What we get is a beautiful play about memory, the memory of a woman who has been at the forefront of history and the changes of evolution in our history, and her perceptions that have stayed in her mind. “

But no one really knows the truth of her. On one hand she is a most private public person and the meetings with the prime ministers are no exception.

“The unwritten rule is there is nobody present, so Morgan is surmising, based on his research… This isn’t a documentary. It would be a fool’s errand to try to create these people, to evoke the real thing to gain a truth,” Jacobs said.

On the other hand MacDonald said, “She has been the most photographed woman in the world since she was born. Fortunately, there’s a lot of research” in books, in photo albums, online, films and videos. “You see her at rest, see her at a party. You can see that she has a sense of humor certainly. Supposedly, she is a great mimic. When she hears someone’s voice, she likes to replicate it and, indeed, she does in this play.”

But the play is meant to be far more than a history lesson although the audience sees the Queen and the ministers at crucial moments in the procession of events in British history.

Elizabeth is also in that strange position of supposedly being in power when the real work is done by the Parliament; she must influence events indirectly. “She doesn’t have the power to say no to the prime minister; her job is to support the prime minister always. But she does have the power to influence him. Her job is to listen to where these people are coming from, to read their body language, to understand what else is going on, what is not being said,” MacDonald said.

Instead, the way Elizabeth presents a different face to each minister – maternal, imperious – makes “it a play we can all relate to about our lives, about aging and accruing knowledge and what do we learn over the course of our lives,” said Jacobs who directed the play Red about Mark Rothko for the Maltz in 2012.

“She becomes a vessel of history and political shifts. We all have that inside of us. We have all have lived so many lives within our own lives.”