Arsht’s The Donkey Show Is A Midsummer Night’s…. 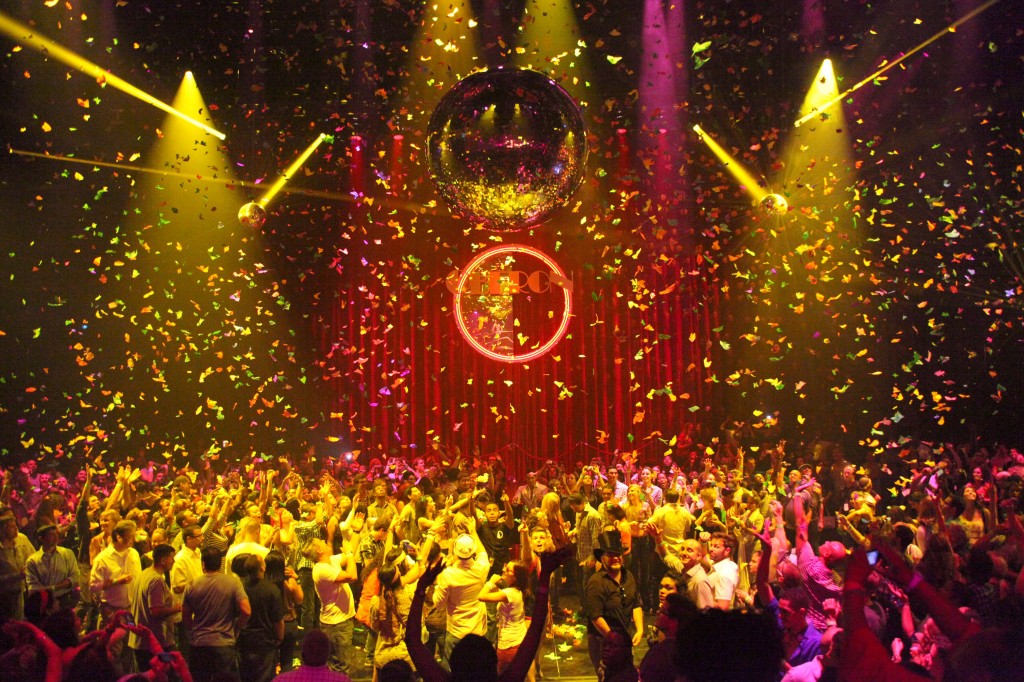 Reviewing The Donkey Show is irrelevant. The immersive multi-media experience at the Arsht Center joyfully cross-dressing as spectacle-drenched theater is about surrender, not analysis.

A nearly naked aerialist spins above your head from a net before miming sex with a jackass. A catalog of the most infectious pelvis pulsating disco hits ever recorded splits your eardrums in quadrophonic sound. A kaleidoscope of lights bounce off the largest glitter ball in North America. Confetti rains down on the audience, most of whom are dancing in and among the paid performers. And in theory, there’s actually a story that loosely, very loosely, approximates part of Shakespeare’s A Midsummer Night’s Dream although don’t expect to be able to answer any Jeopardy questions based on what you see.

The Donkey Show is the Arsht’s attempt to lure a younger, broader, more diverse audience into what some might call theater, but it’s really theatrically enhanced performance art. Set in a sensory overload environment evoking Studio 54, the show is a hybrid of circus, karaoke, dance, light and sound. It’s loud, infectious, silly. Is it fun? Absolutely. Entertaining? You bet. Theater? I’ll go out on a trapeze hanging from the ceiling and say no. Narrative or theme isn’t even secondary; it’s tertiary.

But that isn’t going to bother many people looking for a cross between 21st Century SoBe clubbing and 20th Century kitsch. Let go of your inhibitions and simply enjoy The Donkey Show for what it wants to be.

The minimal dialogue was not written by the Bard. Instead, the creators selected and programmed disco songs whose lyrics echo the skeleton of Shakespeare’s plot. The words are inserted in the mouths of a fantasia of 1970s stereotypes whose characters are a very rough analog to the residents of Will’s Athens. For instance, when Tytania (wow, a different spelling!) quarrels with Oberon, she sings “I Love the Night Life.” When Dr. Wheelgood (billed as “Puck on Rollerskates”) places a magic spell on two mortal couples, the loudspeakers boom the disco version of 2001: A Space Odyssey’s theme “Thus Spake Zarathusa.”

The action is staged in and around scaffolds and platforms surrounding the Arsht’s Wolfson Stage in the Ziff Ballet Opera House with the audience at tables in tiers around a dance floor occupied by the Groundlings who paid a slightly cheaper admission. The audience ends up swept into a sing-a-long whenever they hear the viral choruses of “YMCA” and “I Will Survive.”

The hour-long  “play”  is bookended by 45 minutes in which the performers cavort with the audience as a DJ spins Barry White, Chic and The Bee Gees. Don’t leave before the cast does a post-show kick-butt kick line to Inger Hanna’s scorching rendition of “It’s Raining Men.”

The overall experience is overwhelming and, if you allow it, thoroughly satisfying.

The Donkey Show is the brainchild of director Diane Paulus, recently lauded for her Broadway productions of The Gershwin’s Porgy and Bess and the revival of Hair. She and her husband, the nightclub show impresario Randy Weiner, created the work in 1999 for an off-Broadway run. She then revived it as her first entry when she became artistic director of Harvard University’s American Repertory Theater. It has since been revived and remounted in several cities including London, Seoul and an open-ended run in Cambridge, Massachusetts

This version, produced by the Arsht, is helmed by Paulus’ associate Allegra Libonati who has vastly expanded the project’s scope with the direct involvement of Arsht exec Scott Shiller. The production team features the real stars: Libonati, local choreographer Rosie Herrera, imported lighting designers Al Crawford and Zakaria M. Al-Alami and production stage manager LisaMichelle Eigler. They move the audience’s focus so fluidly from one end of the stage to another so that actors who were over here a moment ago, magically pop up 50 yards away.

The production, even on its own terms, is by turns, imaginative and sophomoric, subtle and blunt, intricate and idiot simple, and surprisingly, both amazingly precise and inexcusably sloppy at the same time. For instance, the lighting effects are carefully choreographed, but many of the performers shout their lyrics with little care for whatever notes exist.

The six-figure production has thrown in strobes, smoke machines, bubble dispensers, everything but the kitchen sink and that’s likely because there wasn’t enough time to find one. They’ve even secured the services of Harry Wayne Casey, the local resident who founded KC and the Sunshine Band, to participate opening night and during the last two Sunday performances as an auxiliary emcee/enabler.

A couple of performers in the 20-member cast have acting credits although those skills weren’t called upon. What every member brought was an unflagging enthusiasm and energy that seduced even the stoniest audience member. The performers all pose and style better than Madonna’s backup boys in “Vogue” (although dancing in sync with each other seemed beyond their reach). 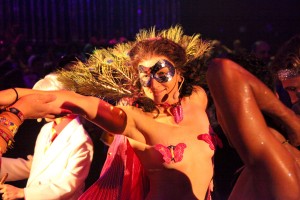 First among equals, certainly the most noticeable, is Miami-based Stephanie Chisholm as Tytania. Tall, lithe and wearing hot pants, mask, a gossamer cape and butterfly pasties, she marched around the stage with a regal air appropriate to the Queen of the Fairies. She delivered the high point of the show when Tytania is hoisted above the crowd in a cargo net and gyrates in various aerial acrobatics, sometimes barely hanging on with one limb. Another standout is local actress Shira Abergel who brings the strongest voice in the cast to the music.

There is one borderline moment in the taste department. Tytania doesn’t just kiss and caress the donkey as Shakespeare suggested. She mimes having intercourse with the animal as occurs in the Donkey Show urban legend sought out by American tourists in Mexico. This probably marks the first time the Arsht has depicted bestiality.

In cold truth, The Donkey Show doesn’t batter down the traditional definitions of theater; it simply dispenses with them. That may or may not be what you’re looking for. This will certainly get some young patrons to return to the Arsht for other similar productions. But no one is going to walk away saying, “Wow, so this is theater; I’m coming back to I Am My Own Wife in October.”

The Donkey Show plays through Aug. 12 (although an extension is possible) at the Adrienne Arsht Center, 1300 Biscayne Boulevard.  Entry is at a velvet-roped area on the northwest corner of the building. Patrons must be over 18 years old to enter; 21 to drink. Doors open 7:30 p.m. Wednesday-Saturday; 10:30 p.m. Saturday, 5 p.m. Sunday. Tickets are $45 for the dance floor, $60 for VIP seats on the tiers with tables. 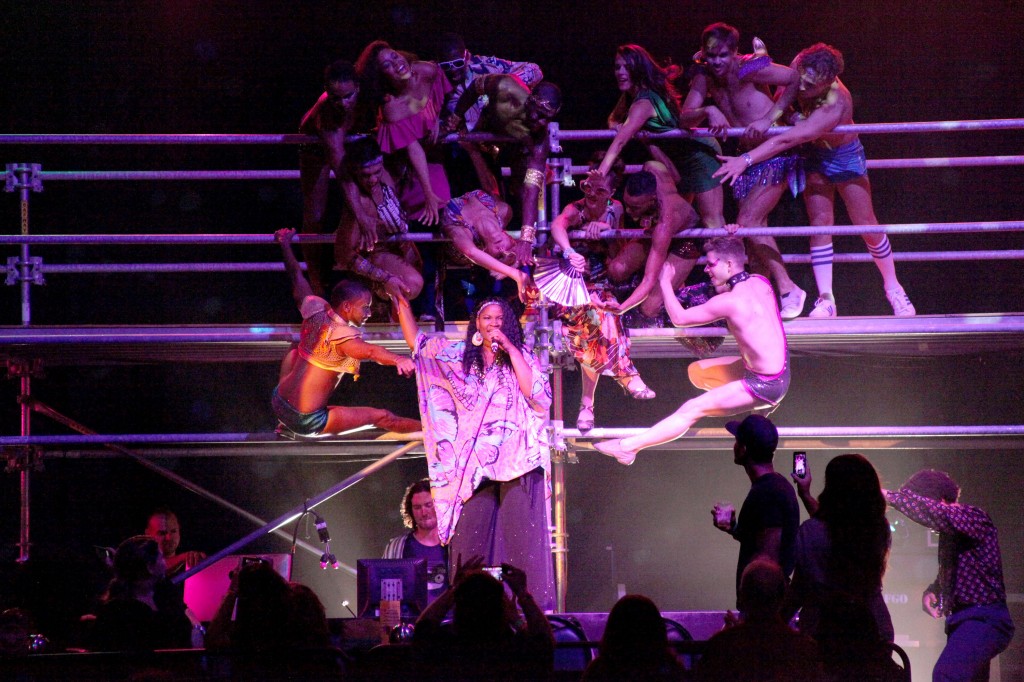 Inger Hanna leads the gang in It's Raining Men.