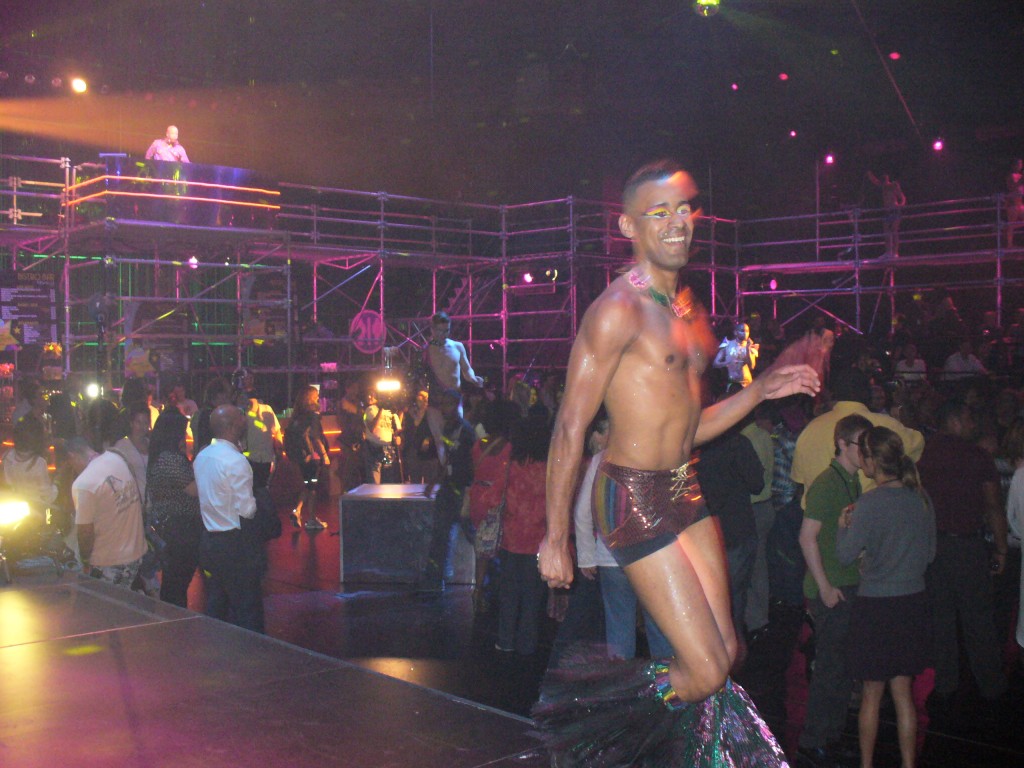 If you miss disco — or missed it completely — the Arsht Center for the Performing Arts has set up a time machine on the very stage where two weeks ago, Simba roamed the African savannah and earlier in the year Rigoletto sang arias while plotting his revenge.

For the next four weeks, the score won’t be Verdi but opuses from the Donna Summer and Village People oeuvres. The costumes won’t be animal masks or brocaded doublets but glittering hot pants and precious little else.

The Arsht is laying a six-figure bet on The Donkey Show, a very loose version of A Midsummer Night’s Dream transmuted into the glitz and glitter of Studio 54. A hybrid of theater and the club scene with the performers working around the audience on the dance floor and at tables, The Donkey Show is an attempt to lure a broader clientele that would never think of Shakespeare as an entertainment option. Drinking, talking, dancing and general partying is encouraged as the action swirls literally around the patrons.

“It’s immersion theater,” said a clearly jazzed Scott Shiller, executive vice president of the Arsht who has been leading the facility’s push into producing local theater that will attract a younger audience. “It erases the boundaries. It’s important to get people out of the seats, put them in the theater and have the theater happen around them.”

Twenty local performers ranging from dancers to aerialists will cavort with patrons on the dance floor and then, temporarily taking on the guise of Shakespeare’s characters, will sing a procession of karaoke disco hits whose lyrics correspond roughly to the plot of the Bard’s classic tale of three love-crossed couples.

Mr. Oberon, the fairy king, is a dead ringer in a double-breasted white suit for Paul Williams, the diminutive singer-songwriter of the era, and his consort, Tytania, is a disco diva wearing the aforementioned hot pants and two large pasties. Period. As with the original, Tytania is placed under a spell of sorts and falls in love with a mortal who has been magically transformed into a donkey.

Iambic pentameter text and Elizabethean vocabulary is never heard as a DJ spins the platters from a perch above the action. Helen (neé Helena in Shakespeare), another lover pining in unrequited love for Dimitri (neé Demetrius), does not intone her famous speeches. Instead, she sings the Thelma Houston anthem, “Don’t Leave Me This Way.” 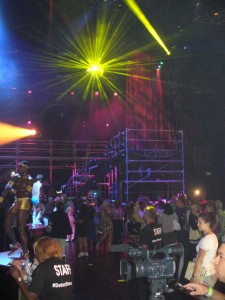 The “play” itself probably only lasts about 90 minutes, but there’s enough opportunity before and after to party as if you’re back in the era of Liza and Ralph and Andy, bopping to “It’s Raining Men.”

The Donkey Show is the brainchild of director Diane Paulus, recently lauded for her Broadway productions of The Gershwin’s Porgy and Bess and the revival of Hair.  She and her husband, the nightclub show impresario Randy Weiner, created the work in 1999 for an off-Broadway run. She then revived it as her first entry when she became artistic director of Harvard University’s American Repertory Theater. It has since been revived and remounted in several cities including London, Seoul and an open-ended run in Cambridge, Massachusetts

This version, completely produced by the Arsht, is helmed by Paulus’ associate Allegra Libonati who has vastly expanded the scope of the project with the direct involvement of Shiller.

The Donkey Show is part of Shiller’s aggressive two-pronged campaign: one, to develop local theater, such as hosting the season of the more conventional Zoetic Stage troupe, and two, reach out to younger, more diverse audiences with such fare as the spectacle-driven Fuerza Bruta two summers ago and by bringing in stylized theatrical productions of the House Theatre of Chicago such as last year’s The Sparrow and this season’s Death and Harry Houdini.

“It’s important that the Arsht Center have a diversity of programming. I believe immersive storytelling and immersive theater will bring in a new audience that may be coming to the Arsht for the first time. It can be an entry point for (visits) in the future,” he said.

Shiller has pulled out the stops, essentially doubling the scope of the original show with twice the cast size and purchasing, not renting, the largest disco ball in the North America— 6 feet 6 inches in diameter – bought from a Chinese manufacturer.  “It was still on the boat being shipped to Boston when we bought it,” Shiller said.

They have gone all out in marketing to draw in what they hope will be 800 people a night. Building the hype included a promotional video shot by a hip-hop director, a street performance in Brickell Village and a massive media preview Thursday that probably cost more than small companies spend on an entire production. It worked: There seems to have been as much coverage, especially by broadcast and video outlets, as for any cultural event this year except Art Basel. Shiller reported more than 4,000 people have attended five previews.

He has commandeered the massive Wolfson Stage and wings of the Ziff Ballet Opera House, used the huge show curtain as the back wall and turned the stage itself into the Oberon Club where audience and performers mingle, a set up akin to Fuerza Bruta. The walls are lined with scaffolding and tiered risers surrounding a dance floor. A long platform lined against the curtain is the primary performing area, but large silver cubes dot the dance floor for additional playing spaces. 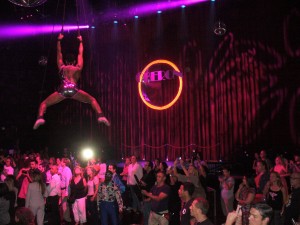 They’ve even secured the services of Harry Casey, the local resident who founded KC and the Sunshine Band, to participate during the last two Sunday performances.

While some of the creative staff comes from out of town, a lot of the talent is local, especially the dancers performing moves designed by Miami’s up and coming choreographer Rosie Herrera. Shira Abergal, recently in Thinking Cap Theatre’s Love Burns, dons a shaggy blond wig and brush moustache to play the Paul Williams/Oberon character. In fact, all but one of the primary roles are played by women.

For all the retro bells and whistles she’s supervising, director Libonati comes from a traditional background. She notes that the Studio 54 “set” intentionally resembles Shakespeare’s Globe Theater in which the “common people” nicknamed the Groundlings stood in a center section in front of the stage while the wealthier sat in tiers of seats on the sides.

But the attraction to the Millenials – and their parents— will be the visceral experience of realizing that clubbing predated SoBe by a few generations.

The Donkey Show plays through Aug. 12 (although an extension is possible) at the Adrienne Arsht Center, 1300 Biscayne Boulevard. Entry is at a velvet-roped area on the northwest corner of the building. Patrons must be over 18 years old to enter; 21 to drink. Doors open 7:30 p.m. Wednesday-Saturday; 10:30 p.m. Saturday, 5 p.m. Sunday. Tickets are $45 for the dance floor, $60 for VIP seats on the tiers with tables.

This entry was posted in Features and tagged Diane Paulus, Scott Shiller, The Donkey Show. Bookmark the permalink.

One Response to Theater? Spectacle? The Arsht’s Donkey Show Prepares To Bray