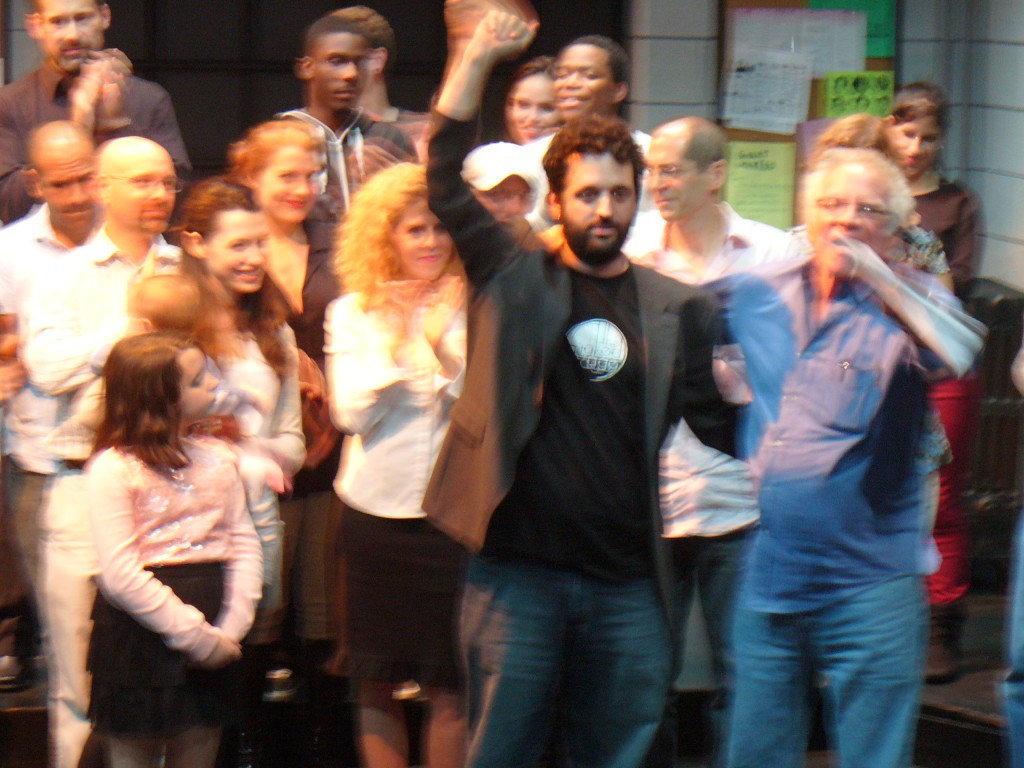 It’s likely a goodly number of actors, directors and certainly some playwrights slept in late this morning. They earned it. Many spent 7 p.m. Sunday to 10 p.m. Monday being creative at gunpoint.

In other words, the sixth 24 Hour Theatre Project benefiting The Naked Stage has now melted in ephemeral history other than some digital photos and dog-eared scripts.

The festival of eight impromptu short plays – fueled by copious caffeine and candy – was artistically among the most consistent in the event’s history. Not that it mattered. Participants at the after party most frequently noted the depth of camaraderie among the eight playwrights, eight directors, 11 interns, 31 actors, plus stage manager, two producers and other worthies who volunteered their time and talents.

Part of that camaraderie was due, they said, to the closer quarters of the donated venue, GableStage. But it also meant that the audience and the artists filled the seats and spilled onto the floor.

Artistic Producer Antonio Amadeo carved out a moment during the mass curtain call of 60-plus artists to acknowledge Joseph Adler, who donated GableStage as both the first and most recent home for the festival. Amadeo praised Adler for his consistent support of fledgling theaters by donating his professional home for readings and fund-raisers. 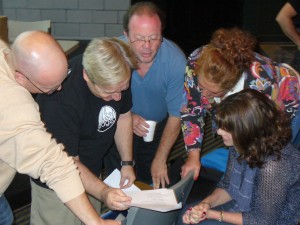 As usual, the quality of writing, directing and acting varied as befits works that did not exist 24 hours earlier. Sunday evening, eight playwrights picked directors’ and actors’ names out of a hat. Then they chose a title from a long list of bizarre phrases such as “Zombies Under Duress” and “Headlice of Doom,” neither of which were chosen. The playwrights then retreated to corners  to write. Well, one reportedly rented a room next door at the Biltmore Hotel. The next morning, with scripts still deep in development, the directors and casts began evolving the show, figuring out simple costumes and props while trying to memorize lines that might change as late as a few minutes before curtain.

What resulted were farcical skits, playlets veering into bittersweet drama and a lot of silliness. Some were surprisingly polished; a couple needed another 24 hours’ work. Some actors delivered nuanced performancesl some were miscast or stumbled with their lines. Again, the partisan crowd didn’t care.

The show opened with one of the stronger entries, the comedy The Peanut Butter Conspiracy, written by Christopher Demos-Brown and directed by Michael Leeds. An eclectic group of parochial school parents Jim Ballard, Oscar Cheda, Tracey Barrow-Schoenblatt and Shane Tanner waited in an office convinced that one of their children had brought banned peanuts to school and caused an allergic reaction in some classmate.

Next came Pieces of Lisa, by Stuart Meltzer and directed by Amy London, in which sons Clay Cartland, David Perez-Ribada and Nicholas Richberg, plus father Dan Leonard, prepared for their mother’s funeral. Cartland was hysterically funny as the inarticulate brother and Ribada issued a steady stream of F-bombs in his long tirades. But Richberg as the narrator delivered unusually smooth and heartfelt long speeches to the audience mixing comedy and pathos.

Pontius CoPilot by Christopher De Paola and directed by Skye Whitcomb posited Anne Chamberlain as a deceptively fresh-faced drug kingpin and Mcley Lafrance as her lieutenant who cold-bloodedly bumped off hard-case colleagues played by George Schiavone and Karen Stephens.

Myth America by Tony Finstrom and directed by Avi Hoffman was one of the out and out funnier pieces in which playwright Patti Gardner tried to get her Southern Gothic mother Sally Bondi to abandon looking for her lost “precious pussy” and attend opening night of her autobiographical play. Distracting them were twin sisters (both Amy Miller Brennan) and Bondi’s sex-crazed husband Andy Quiroga.

Splintered by Juan C. Sanchez and directed by Hugh Murphy was ambitious: four scenes in which husband Clive Cholerton ignored his wife Barbara Sloan until her death. Then he was haunted by her memory – and also by her ghost who is objecting to their sons Alex Alvarez and Noah Levine selling off her belongings.

Satan’s Cheerleaders by Marj O’Neill-Butler and directed by Nicole Stodard was the obligatory off-the-wall entry in which the Devil played by Dave Corey plotted with his staff Eva Braun (Amy McKenna), Lizzie Borden (Meredith Bartmon) and Squeaky Fromme (Sabrina Lynn Gore) to help the Republicans win the election in an effort to bring in more souls to steal.

Mermaids in the Attic by Andie Arthur and directed by Dan Kelley was a gentle almost poetic episode in which Julie Kleiner was packing up her late mother’s effects with her own son Hunter McConnell as the spirit of Kleiner’s grandfather, Troy Davidson, uttering sage observations from the great beyond.

The evening ended with the prolific Michael McKeever penning Goldfish Don’t Bounce directed by Andy Rogow. Set at adjoining tables in a restaurant, it contrasted the bickering of a middle-aged couple celebrating their 14th wedding anniversary (Lela Elam and Wayne LeGette) alongside a dewy-eyed young couple on the cusp of getting engaged (Arielle Hoffman and Adam Simpson). 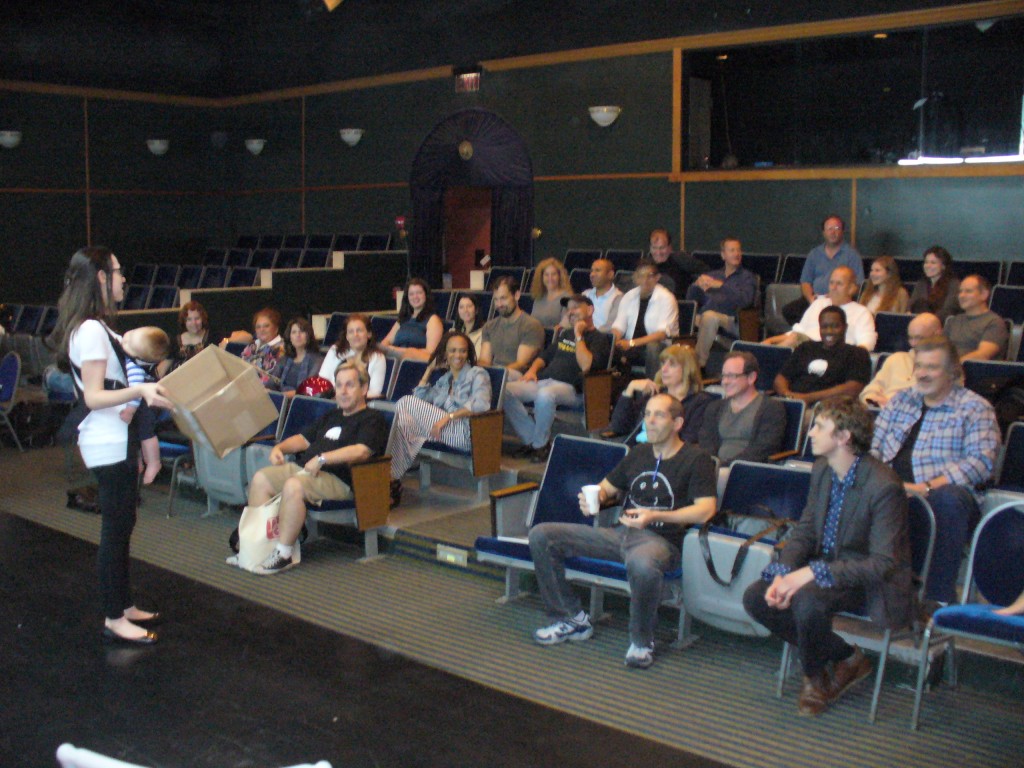 Katherine Amadeo addresses playwrights, directors and some actors with the names in the box to match up the participants