Avery Sommers Triumphs As Bessie Smith In The Devil’s Music 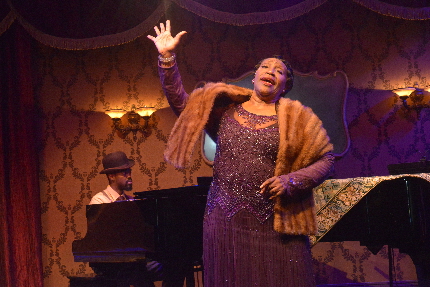 There’s a verb that theater people use to describe a performance in which an actor melds so completely with the role that there is no visible separation, no acting. It’s called “inhabiting the character.”

When an aging hard-living diva strides into the spotlight with a commanding imperiousness to sing “Bad Mood Blues,” the audience is teleported from the Arts Garage’s 21st Century cabaret in tony Delray Beach with a crowd of well-heeled mostly white patrons drinking Cabernet. They land in a modest 1937 intimate “buffet flat” venue in Memphis that serves primarily blacks not allowed in restricted establishments and blessed with a supply of bathtub liquor.

Over a bit less than 90 minutes, Smith reigns over a set of 15 numbers encompassing gospel, swing and every permutation of the blues. In between, she swigs copious amounts of gin and reminisces about her troubled life. As the booze takes its effect, her mien evolves from hard-earned confidence to loose amiability to angry outbursts to a crushed soul recalling her deepest tragedy and finally a resigned depression. You’d marvel at Sommers’ acting in speeches and through her incomparable singing, but again, there’s little sign of Sommers up there, just Smith.

Directed by Genie Croft, The Devil’s Music: The Life and Blues of Bessie Smith is an enthralling evening both as a concert and theater. The 2000 “play with music” opens as her pianist Pickles (Elijah Taj Gee) eulogizes his star who died in a traffic accident a few days earlier. Then the play rewinds nine days to the appearance she made at the modest venue when the segregated hall in Memphis that hired her would not allow her in the front door.

Indeed, racism joins poverty, alcoholism and abusive men as the infections that dog her life. It is an oscillating arc that encompasses such triumphs as being the highest paid black entertainer of her time and crushing tragedies such as her “free” lifestyle empowering the court to take away custody of her beloved adopted child.

But throughout, Smith/Sommers exudes an independence rarely found in women of the period, let alone black women. When she sings the rollicking declaration of independence from social judgment “T’aint Nobody’s Business If I Do,” a defiance shines out from someone who knows such an attitude carries a price tag.

Sommers has become a South Florida mainstay in cabarets and musicals in between a career on Broadway in Ain’t Misbehaving and Showboat, road tours, concerts, regional theater musicals, recurring roles on television, shots in independent movies and she is currently filming a YouTube series. But The Devil’s Music is something special.

Dressed in a dark lavender gown with beads, draped in a fur stole and capped by a marcelled hair perm, Sommers disappears. Even her voice sounds different as she croons a moving a cappella intro to “Amazing Grace” to honor Smith’s mentor Ma Rainey, or when she invests profound depth into the normally saccharine whiny “I Ain’t Got Nobody” (to be lampooned by David Lee Roth a half-century later.)

A dozen moods cross her face during the evening, from a grin as she shimmies her girth around the stage, to the confident scowl of someone who knows what she can do, who knows who she is, who knows the price she paid and who dares you to challenge her. Early on, she says to the audience, “You want me to sing, you better put your hands together or I’m walking out of here.”

Watch how she moves: strutting, striding, shimmying, sliding and sometimes forced into a rolling walk as her physical weight and emotional baggage begin to affect her gait.

The book by Angelo Parra weaves in her recollections convincingly as someone relating stories as opposed to the usual trap of biographical musicals “and then I wrote.” He does not shy away from the salty language and the promiscuity that Smith enjoyed. Whenever the topic of death flits by – and it does frequently – Smith hears the whirr of a cold wind and a green tinge suffuses the room. That works the first few times it happens, but it after a while it feels forced.

Miche Braden, who earned a 2001 Carbonell nomination for the role at Florida Stage, drafted the impeccable arrangements. They’re delivered beautifully by the live band led by Gee on honky tonk piano, Cornelious Johnson’s insolent sax, Senegal Apostolo’s rock solid bass, and Tovah Lovely’s facile drums. The sound design by David Hart and executed by Steve Daniels is all you could ask for. (Added note: We had the best seat in  the house; we heard from others the next day that the sound was not as good on the sides of the right side of the house). That gown and the band’s clothing was designed by Linda Shorrock and the morphing lighting is by Tom Shorrock.

Arts Garage has undergone a rocky few months as it tries to straighten out its shaky finances to keep its lease and its funding from city officials. But as the sold-out house at the opening night of The Devil’s Music can tell you, the meat of what’s on stage is superb.