Caisley’s Happy Is Corrosive Flawed, But Intriguing Comedy About Self-Deception

Posted on December 2, 2012 by Bill Hirschman 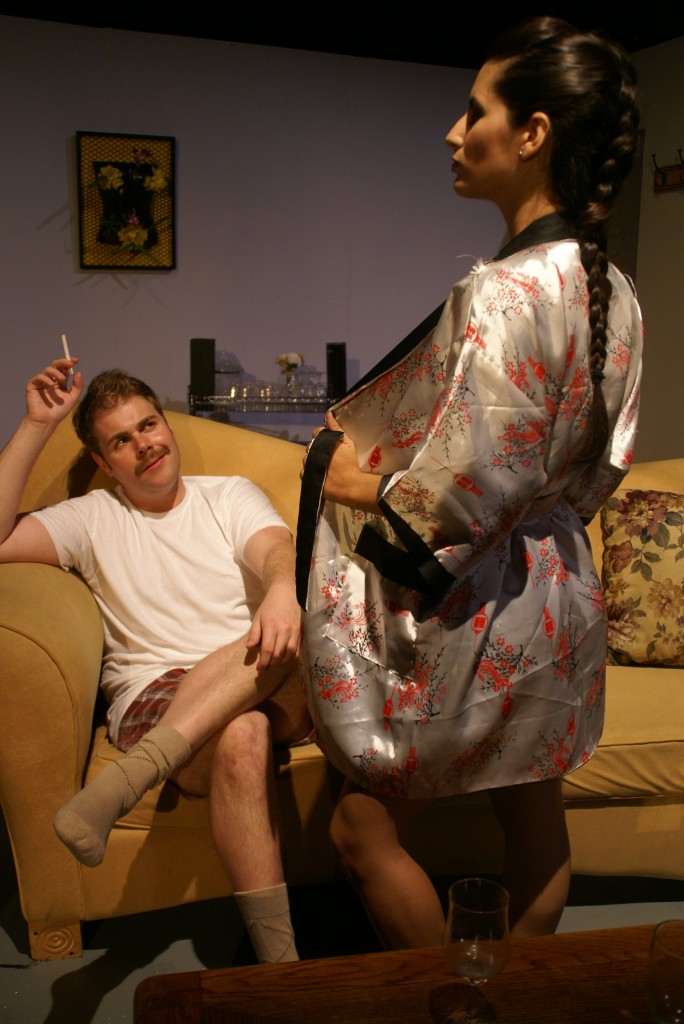 To thine own self be true, Polonius admonished. The alternative, Robert Caisley warns in his sardonically entitled Happy, is corrosive self-deceptions that fester until the betrayals explode.

New Theatre’s production is not an evening you “like” watching an “emotional terrorist” spend 80 minutes mercilessly carving away a nebbish’s illusion of well-being. But even with a flawed mounting of a script that still needs work, Happy is undeniably an intriguing examination of modern man burying true feelings under a socially-acceptable but life-denying veneer.

Caisley constructs a dramatic arc that begins as a quite funny comedy. But it intentionally disintegrates molecule-by-molecule into tragedy, a deadly serious cousin to God of Carnage.

As with much in this work under Ricky J. Martinez’s direction, it’s not clear whether Caisley endorses or condemns or just wants to spotlight the present-day prevailing philosophy of “go along to get along” as a way to keep the machinery of social interaction churning smoothly.

But like a much shorter Who’s Afraid of Virginia Woolf, an alcohol-fueled party among two couples devolves from meaningless niceties into a bleak landscape of savaged egos and emotions – with a shred of hope that a life without hypocrisy is a more genuine one. That’s thought-provoking fodder for days to come.

The other virtue that must be mentioned early on is the creation of the aforementioned characters by Caisley, Martinez and actors Scott Douglas Wilson and Maria Corina Ramirez, fearlessly presenting complex creatures for whom the word quirky does not begin to suffice.

The set up is the arrival of tweedy middle-aged academic Alfred (Wilson) at the loft/studio/apartment of his best friend of 14 years, the bohemian artist Eduardo (Ernesto Miyares) for a dinner party. Eduardo isn’t here yet and Alfred’s equally bourgeois wife Melinda (Jessica Marion Welch) is en route.

But when Alfred walks inside the open door of the apartment, out steps Eduardo’s brand-new lover, the 22-year-old Eva (Ramirez), a slinky beauty dressed only in a bath towel. For 20 minutes, Alfred never gets more than three feet into the apartment. The feline Eva immediately begins to toy with this mousey visitor, playing on his discomfort with the mild interest of a scientist circling a live frog she’s in the process of dissecting.

She focuses on Alfred’s Pollyanna demeanor, a quality she claims Ernesto has secretly derided as “freakishly happy.” Having just been intentionally soaked by a passing motorist running into a puddle, Alfred still refuses to get angry. As the play progresses, he finds “a silver lining” to postponing his dream of being an author, raising a special needs child and other daunting challenges.

Eva, a dour provocateur, challenges, “I’m not happy? Do I look happy? I’ve been drinking gin all day.… I don’t know a single person who’s happy who isn’t high.”

Eva taunts Alfred’s affability, heightened reliance on good manners and that false laugh that most people employ when thrust into a socially awkward situation. At one point, she pointedly spreads moisturizer on her legs in front of Alfred, then acts offended, “Are you looking at my legs?” When Alfred sputters a denial, she bursts out in a raucous laugh, “Just kidding!”

This goes on for 20 minutes. Martinez wisely underscores Alfred’s unease by injecting those long pauses and itchy silences when people don’t quite know what to say to each other. But that makes for a long first quarter of the play.

Finally, an ebullient Eduardo arrives. He’s a middle-aged man besotted with his paramour who had decorated the loft with her bizarre conceptual art of women’s torsos adorned with hot dogs and penises (actually for sale by local artist Theresa Marie Callouri). Soon after, Melinda shows up, telling how she too was attacked by the same driver outside.

The play meanders until literally half-way through when Melinda’s heartfelt revelation about their child finally turns the play into the darker territory that Caisley has been aiming for all night.

If Eva was abrasive before, now copious amount of liquor wipe away even a vestige of inhibition. Eva has fresh meat to slash and burn in Melinda. When Eva insincerely asks how the couple met, Melinda dives in, expecting at least feigned interest from the person asking the question. But it’s another set-up from Eva who, in the funniest scene of the play, pointedly fakes snoring in boredom in various poses and registers for a solid minute.

Then something strange happens: We realize that Eva the uncompromising truth teller is forcing the couple to face the emptiness of their lives of quiet desperation, although she’s motivated by disgust not altruism.

Matters quickly deteriorate. Events and revelations strip away Alfred’s calcified complacency. His repressed anger at the disappointments in his life swell in a series of bravura speeches until he ends the night like George and Martha sitting on the floor, bloodied both physically and emotionally.

Obviously, New Theatre has made a courageous choice of unsettling and challenging material, and Martinez embraces it, never shying from the fact that every character here is flawed and Eva, in particular, is abrasive and unlikeable.

But there is so much else unclear here. Is this ego demolition project a goal of Eva or Eduardo or both?  Is Eduardo an innocent or traitorous? Are any of the stories true that Eva tells? The script specifically gives credence to all of them and Martinez certainly doesn’t sort it out. So is that intentional or sloppy?

In publicity around the country, the play has been described as being “about how vicious and enviable we can be of people possessed with a natural joie de vivre.” That does not come across as the driving force of the work in this production.  Eva doesn’t envy Alfred’s happiness, and Alfred’s happiness is a sham.

Another major staging problem: The New Theatre, which suffered in cramped quarters for years in Coral Gables, now has a deep stage to work with at Roxy Performing Arts Center. Unfortunately, due in part to the scenic design, the focus of that first 20 minutes of the play is situated so far upstage that even we in the fourth row felt distanced from the proceedings.

Welch’s portrayal of the well-meaning ineffectual Melinda is adequate if not outstanding and Miyares’ Eduardo is convincingly jovial until the party sours.

The kudos are due Wilson and Ramirez. Wilson pulls off the considerable challenge of making the audience plug into this likable nerd with the nervous grim and hapless demeanor. Somehow, Wilson’s charm keeps us from getting tired of his unfailing sanguinity. He persuasively charts Alfred’s slow dissolve from optimistic good cheer to agonized self-recognition to a kind of resigned peace. Ramirez’s character is so acerbic, so mercurial, so sadistic that it is a miracle that Ramirez makes her seem almost honorable. To enable the comedy, both characters are written to dance on the edge of being cartoons, but somehow these two actors make them credible as well. Both also take Martinez’s direction and are unafraid of pauses for comic timing or just plain silences.

Caisley has a history of two previous plays with New Theatre, Winter last season with Wilson, and Kissing in 2009. This production is the second stop on Happy’s  four-city “rolling world premiere” under the National New Play Network’s program of guaranteeing an accepted work will have multiple productions in a single season to give the playwright a chance to refine their script after seeing different directors and casts interpret it.