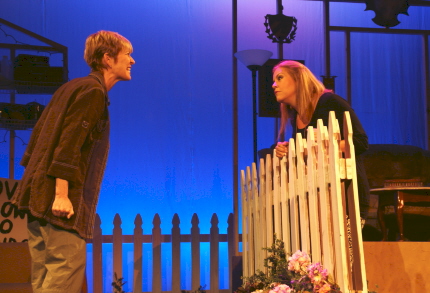 Comedy. Tragedy. Absurdist farce. Subtle satire. Family drama. Sociological tract about race relations. Juan C. Sanchez’s world premiere Property Line at New Theatre encompasses all this and more in an intellectually intriguing, promising script that needs a lot of work before it will gel into a satisfying evening of theater.

It’s not that all these disparate genres can’t be melded together in theory, but the script in its present form ranges so far and wide tonally that director Ricky J. Martinez and an earnest cast simply cannot make the melange credible.

For instance, a bleeding heart liberal who marches for gay rights becomes so unhinged by the hostile situation at the crux of the play that she screams at her former best friend that she wishes all Cubans would go back to their homeland. That, of course, is Sanchez’s point: The petty cupidity of greed and possessiveness can drive people to obliterate the veneer of civilized relations and even genuine affection. But you don’t buy it for a second.

A mother and teenage son blithely and frequently use fouler language – usually directed at each other — than you’d hear in the Marlins locker room after another loss. That may exist in some families, but again, not among family members we saw playfully bantering a few moments earlier.

Even so, acknowledge Sanchez’s skill that he has developed over the years, especially at the late Promethean Theatre Company, which produced his Buck Fever, Red Tide and A Bearded Lover. Sanchez has a real talent for funny dialogue as well as tender moments such as the Anglo couple teasing each other about sex and the Hispanic mother trying to get her son to speak endearments to her in Spanish.

Sanchez also delivers a clear vision of ethnic tensions simmering under the glastnost that Miamians have constructed in the 21st Century. Further, he illustrates that Hispanics in Miami are not as simple or monolithic as Anglos might think: The teenager not only doesn’t speak much Spanish; he does not consider himself Cuban.

The play occurs in a middle-class Miami neighborhood where liberal Anglo couple, Charlie and Mag (Bill Schwartz and Barbara Sloan) live next door to the Cuban-American widow Blanca and her 17-year-old son Danny (Evelyn Perez and Javier “Javi” Cabrera). Separated, they think, only by flimsy white picket fence lined with Mag’s garden, the families have been so close that Danny has formed an attachment to Charlie since his father died.

But something (and it’s never clear precisely what) sets the grief-engorged Blanca to pursue her husband’s discovery that their neighbors’ fence was erected 15 feet into their property, years before either family moved in.

What follows is a kind of cold war satire Dr. Strangelove in which anger and retaliation escalate far beyond any sane or rational progression. Proportional response is left at the starting gate despite the restrained advice of a lawyer (Scott Douglas Wilson). Mag says, “It’s the apocalypse. I can see the end of the world…  I will set fire to my house. I will set fire to the neighborhood” before letting Blanca win. And when you see Blanca’s affinity for firearms and knives, you just know that if Henrik Ibsen put a dueling pistol in the first act, you know where Juan Sanchez is going in the second.

The devolution is never plausible and perhaps if this was purely farce, satire or sit-com (all of which it resembles at times) it wouldn’t have to be. But Sanchez clearly wants us to care about these people in order that the obvious nuclear denouement will be tragic. So he lays in touching scenes of amity and love that lead you to believe this is not a pure comedy.

The cast and Martinez try to make this work, but the gears just don’t shift smoothly in the performances. In several places, two characters show affection, then in the space of seconds, not even a full minute, they are screaming obscenities at each other, flinging the most hurtful secrets possible and threatening each other.

His dialog can be as elegant as Mag saying wistfully, “The world is not a graceful place,” or as clumsy as “He wanted to choke the living life out of you.”

And Danny’s vocabulary may be authentic, but it was easy to get tired of nearly every sentence ending or beginning with the word “yo,” and with “mother**ker” being one of the few nouns he seems to know.

One serious structural problem is that we never see the two families at the starting point of the narrative arc when they are close friends or, at least, one family is fooling themselves into thinking that. Instead, we get a very long scene of domestic tranquility between Charlie and Mag, which drops in exposition without a lot of subtlety. People do not say, “You know, our son – Robert – is such and such.”

At the other end, the play has two extra scenes that show the aftermath of the inevitable explosion, but they seem dramaturgically unnecessary. One playwriting and directing tip (and we’ve seen this a lot recently): When the audience doesn’t applaud at the end of a play as happened here, it’s often because they don’t know it’s over.

Side note: New Theatre is continuing its program of providing theater for hearing-impaired patrons with three extra performances with Shadow Interpretation April 13-15 at the South Miami-Dade Cultural Arts Center, 10950 SW 211 Street, Cutler Bay. Interpreters use American Sign Language, performing as “shadows” during a live stage production alongside voiced actors. The Shadow actors performing alongside the New Theatre actors are: Jodi Raffoul, Melissa Martin, Marcy J. Albright, Christie M. Cohn, and Natasha Romero. Shadow directors are Brian Gauci and JohnPaul Jebian.   For more information call (786) 573-5300 or visit www.smdcac.org. The Shadow Interpreted Theater Program and Open Access Theater Series are made possible with the support of the Miami-Dade County Department of Cultural Affairs and the Cultural Affairs Council, the Miami-Dade County Mayor and Board of County Commissioners. The program is supported in part by an award from the National Endowment for the Arts.