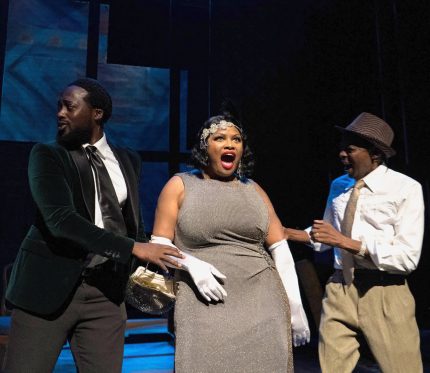 If it’s possible to capture the depth and breadth of a tumultuous vibrant time and place by just focusing on the intersecting lives of five ordinary people, in this case Harlem in 1930, then Pearl Cleage’s Blues for an Alabama Sky comes close, notably in this production by the M Ensemble Company.

Jazz, sex, violence, racism, romance, homophobia, friendship, abortion, poverty and a good deal of champagne are threaded through the fabric of Cleage’s 1995 play given a solid if leisurely paced outing by the oldest continuing Black theater in the state.

Director Carey Brianna Hart has led a quintet of actors in examining a group of Black neighbors – a kind of ad hoc extended family —  all of whom came to New York  in the Southern exodus to forge a future from dreams.

Amid this collision of the Great Depression, Prohibition and the winding down of the Harlem Renaissance, one character will triumph – ironically by leaving the city for Paris; several will be shattered by tragedy.

Angel Allen, a Bessie Smith wannabe with verve, has been fired from one of the very few singing jobs available and comes back drunk to the apartment of her best friend, Guy Jacobs, a flamboyantly gay costume designer. They are visited by their good friend living in the next apartment, Delia Patterson, a plain-dressing social worker trying to establish a birth control clinic in Harlem with Margaret Sanger.

They will be joined by their pal, Sam Thomas, a dedicated overworked doctor by day and a charming nightclub partier at night. Angel, dejected by rejection after rejection in her profession, is receptive to being wooed by widower Leland Cunningham, an earnest straight arrow just arrived from Tuskegee with all his country virtues and prejudices intact.

Angel, whose hard times once forced her briefly into a profession she doesn’t talk about, is watching her career spiraling as her drinking increases. She has just broken up with an abusive cheating user of a gangster boyfriend, clearly not the first.

Jacobs is convinced that he will escape the homophobia and racism of the street by selling his creations to legendary entertainer Josephine Baker who emigrated to Paris to escape the same ills. It would seem a pipe dream, but he keeps his hopes buoyant, exemplified by a wit-laced tongue brimming with quips and repartee.

Delia is lonely but digging deep into her cause when she finds more than an ally in Sam, and a deeper relationship evolves. Angel doesn’t have real feelings for Leland, but his ardor seems a valid option, even though when asked for his profession he says as a joke,” A carpenter, just like Jesus.”

Collisions are inevitable and most do not end well. But there is life brimming in every scene and a verbal call more than once to “Let the good times roll!”

Carey Hart has elicited fine performances from her corps, all of whom remind mainstream theater goers that there are so many competent BIPOC artists who just aren’t getting hired much outside of companies like M Ensemble.

Chasity Hart (no relation to the director) convincingly builds the troubled nightclub singer desperately seeking stability. When her Angel explodes in fury, fire and fear, you look around to see if any of the red-hot lava is coming your way. Hart, who scored in the African Heritage Cultural Center’s The Colored Museum and in M Ensemble’s Sisters, also serenades everyone with a sensual version of “St. Louis Blues.”

Chat Atkins, who played Leland in an earlier production, has a blast as Guy with his inextinguishable optimism, whether it’s the improbable dream of dressing Josephine in Paris, or sloughing off the racist and homophobic taunts of people in the street.

Sarah Gracel won a Carbonell a few years back as Effie White in Broward Stage Door’s Dreamgirls.  Her accomplishment here is keeping Delia a vibrant character whom we care about even when surrounded by far flashier friends. As her romance with Sam blossoms, the audience is rooting for Gracel’s Delia to find some happiness.

Keith C. Wade, a dependable veteran of local theater for decades now, does something similar as Gracel; even though his doctor is not as flashy as Angel and Guy, his sturdy grace makes him someone Delia could easily admire then fall in love with.

Jean Hyppolite makes Leland’s “God-fearing Christian man” an attractive option for Angel; but his very stolidness clues the audience that despite Angel’s plans, this match can never flourish.

Cleage’s play was mounted twice locally in 2000: by M Ensemble and another at famed director/playwright Vinnette Carroll’s Fort Lauderdale theater remodeled into a downtown church.

Cleage created denizens of this neighborhood who drop names that are now boldface in history but to them are just people they know by first names like “Langston.”

Carey Hart has guided these actors to credible performances and stages the show smoothly, but the evening drags because of lengthy scene changes, costume changes and some technical glitches, so that opening night was 2 hours 45 minutes including one intermission. Therefore, it could use just a shred more fire to avoid feeling sluggish.

On the plus side, company co-founder Shirley Richardson has provided a score of costumes – gowns with spangles and sparkles, pin-striped suits – that solidly set the period.

And those long scene changes are alleviated somewhat by gloriously introspective jazz-imbued musical passages that sound like Miles or Bird (granted they came a generation later) but actually are new music from an album by New World alumni Raymond Angry with Timo Elliston.

Blues for an Alabama Sky at M Ensemble runs through May 29 at the Sandrell Rivers Theater, 6103 N.W. Seventh Ave., Miami. 8 p.m. Friday-Saturday, 3 p.m. Sunday. Tickets $31. Running time 2 hours 45 minutes with one intermission. Face masks are recommended but not required inside the building. Call (305) 200-5043 or visit themensemble.com.