Posted on February 7, 2013 by Bill Hirschman 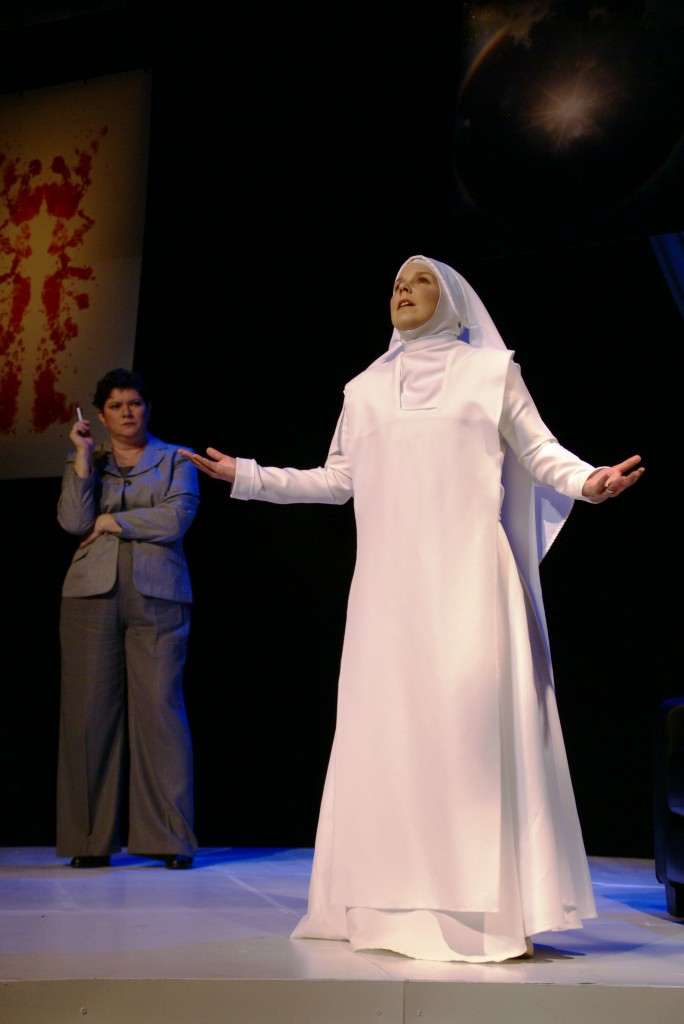 It’s been a season of struggles between faith and reason, intellect and romanticism, science and religion in South Florida theater: Amadeus at the Maltz Jupiter Theatre, The Magic Flute at Florida Grand Opera, and simultaneous productions bowing this week of Doubt: A Parable at the Maltz and Andrews Living Arts.

But for a bare-knuckled battle between the forces of God and the forces of ratiocination, no script is as much an intellectual slugfest as John Pielmeier’s Agnes of God, now getting a consistently intriguing, occasionally engrossing and, in its final scenes, riveting production at New Theatre.

If the chemistry among Christina Groom, Pamela Roza and Barbara Sloan isn’t as electrifying as it could be, all three actresses individually create vigorous and robust characters under Ricky J. Martinez’s direction to deliver one of the stronger offerings that New Theatre has produced in the past couple of seasons.

The 1980 play sets up a war between court-appointed psychiatrist Martha Livingston (Roza) and canny Mother Superior Miriam Ruth (Sloan) who struggle for the soul of the titular otherworldly young nun (Groom).

Agnes has been accused of having given birth to a child and strangling it – even though she has no memory of being pregnant let alone being impregnated, let alone killing it.

Livingston tries to discover the “truth” of how she became pregnant and why she killed the child, but Miriam Ruth implies the birth was a divine miracle and, in any case, that delving too deep might needlessly destroy both the miracle and Agnes’ faith.

Pielmeier has given all three women the truckloads of baggage that you only find in theater such as Martha’s sister being a nun who died in a convent for lack of medical attention, Agnes being physically and psychologically abused by her late mother, and Miriam Ruth sharing more than just a calling with Agnes.

But their agendas just intensify the three-way tug of war. On one level, the play is not meant to answer or settle questions, just to spotlight and fuel the debate. But in Martinez and company’s production, the audience is aware that Pielmeier has, in fact, supplied some potential answers for the audience to chew on as they leave the auditorium.

Miriam Ruth says, “You’ll never find the answer to everything, doctor. One and one is two, yes, but that leads to four and then to eight and soon to infinity. The wonder of science is not the answers it provides but in the questions it uncovers, For every miracle it finally explains, ten thousand more miracles come into being.”

Without giving away the finale, think when this is over about Agnes’ resonance with what the psychiatrist does to his patient and himself in the end of Peter Shaffer’s Equus.

What this production is missing is the flinty antagonism needed between the psychiatrist and Mother Superior. We’re supposed to sense that each sees this as a very personal life and death struggle; each sees the other woman as threat to something precious in the way each views the world. Instead, we feel each woman only resents the other.

Groom succeeds completely with the toughest job — making credible Agnes’ naiveté that makes the audience vacillate between thinking one moment that she is genuinely touched by God and the next convinced that she is just certifiably psychotic. The looming abyss of  overplaying both extremes is huge, but Groom deftly sidesteps the danger. There’s one scene where her wide blue eyes and large warm grin are beatific one moment and then nearly satanic the next. And you believe them both.

Groom is not well-known to mainstream theatergoers, but she made an impression on omnivorous patrons with her Princess Katharine in New Theatre’s Henry V, Squeaky Fromme in Slow Burn Theatre Company’s Assassins, the party girl Kate in Outré Theatre Company’s The Wild Party and Marcy in Outré’s reading of Dog Sees God.

Sloan has proven herself year in and year out as one of New Theatre’s most skilled leading ladies, often putting together a performance that supersedes the material she’s been handed. With a bit of hard-edged sass to her voice, she’s perfectly cast here for her ability to make Mother Miriam Ruth someone with a pragmatic past, thereby investing her spiritual yearnings with integrity.

And welcome back, Pamela Roza. Time was when Roza’s presence was enough by itself to make a play worth going to see: Boy Gets Girl, Medea Redux/Bash, Killer Joe and her standout performance as Li’l Bit in New Theatre’s How I Learned to Drive. Roza has been busy raising two kids, earning an advanced degree and putting food on the table, so the only work we’ve seen her in recently was as the demented assistant in Mosaic Theatre’s Why Torture Is Wrong….

While she doesn’t clash with Sloan as vigorously as we’d hoped, Roza smoothly slips on the persona of a haunted woman whose ghosts are just out of sight but never out of mind. Her doctor is suffused with both genuine caring for Agnes and an almost physical need to find a temporal explanation at all costs. She’s especially effective in her monologues to the audience, savoring the precise phrasing of the words.

Martinez has done a better than usual job in staging: setting up the antagonists head to head when necessary, but also having them swirl around Agnes as the prize of their sparring. He has added or allowed some nice touches such as the doctor automatically crossing herself or when all three women are on their knees on the floor at the climax and Miriam Ruth rises physically and morally above Livingston to castigate her.

Martinez also designed the spare setting, primarily three chairs, three stands with votive candles, and paintings overhead of Rorschach inkblots and scenes with a religious theme such as a Madonna and a dove. Eric J. Cantrell’s shifting lighting scheme includes lighting up specific paintings to reflect the plot turns. K. Blair Brown’s costume design is simple: black for the Mother Superior, grey for the doctor and a starched, impossibly white habit for Agnes.