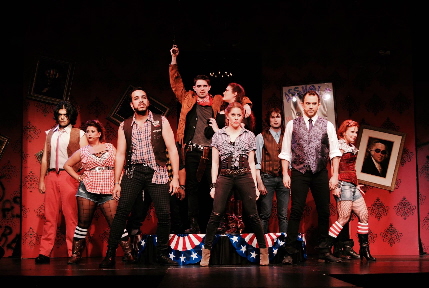 When critics write that they can’t wait to see a full production of a musical viewed in a concert version/tryout, as we did in 2013 about Outré Theatre Company’s Bloody Bloody Andrew Jackson, the truth is that we hold our breath wondering whether the reality will match expectations.

Well, no need to fear here. With bracing anger, profuse profanity and biting satire that is more slashing than surgical, this edition of Bloody will not to be everyone’s taste but it is more assured and more easily understood than the admirable but messy concert version we saw earlier.

Ostensibly a biography of our seventh president, the satire is a punkish Emo take on this country’s bottomless hubristic pursuit of Manifest Destiny via a genocidal campaign against the American Indians. It draws parallels to broader modern American know-nothing arrogance exemplified by, but not limited to, the George W. Bush Administration and the rise of the Tea Party. By reimagining Jackson as a jingoistic not-too-bright rock star, it depicts politicians as shallow as celebrities for a mob that demands substance from neither.

The show is no kinder to the populace than the politicians. The voters are ignorant sheep led wherever a demagogue wants to take them. Even when Jackson deigns to asks the people’s opinion, they have no idea what issues he’s polling them about.

Staged as sort of a small town high school history pageant, the style is intentionally sledgehammer broad in every category from the melodramatic acting to the Green Day brand of music.

Much of the humor is beyond sophomoric; it’s intentionally dumber than a Saturday Night Live skit. Faced with the red tape of the bureaucracy, Jackson proclaims, “I’m federal Metamucil; I’m here to unclog the system.” Similarly, the punkish costume design gave Jackson a Bowie knife in a large scabbard located precisely where a codpiece might end up and for good measure, he jiggled his hips on occasion to underscore the point. Somehow, that excess doesn’t quite go over the top in a production where “the top” is located somewhere in the ionosphere.

But mostly, Bloody it’s about how History is horsepucky. In that intentionally lampoonish broad approach, authors Alex Timbers and Michael Friedman seem to say that history is so perverted by lies and rationalizations that it doesn’t deserve to be depicted seriously.

The earlier tryout benefited this iteration with insights and lessons learned. Artistic Director Skye Whitcomb and Assistant Director Sabrina Lynn Gore have located the precise gonzo groove the work demands for much of the evening and yet smoothly change gears when the horrid truth of what Jackson has wrought finally comes clear even to him -– and to those in the audience who see tragic parallels to the current socio-political scene.

They and their cast have tweaked the script even with a reference at Sunday’s matinee that Game of Thrones would be broadcast that night.

To be fair, some folks may feel a bit burned out that the overall nose-thumbing vibe is really just a couple of wry jokes played out over and over for about two hours. But others will savor each thrust of the saber.

The focal point was Robert Johnston’s portrayal of the arrogant, dimwitted Jackson. Johnston, who was the naked victim in Zoetic Stage’s Clark Gable Slept Here and the hero in High Fidelity, has enough charisma and rock swagger to make Jackson almost likable in his simultaneous self-absorption and insatiable need for adoration. He starts out with a boyish face leavened with a three day-growth of beard. But as Jackson discovers the pragmatic requirements of running a government and the compromises requiring selling one’s soul, Johnston depicts the war between Jackson’s troubled conscience and his blithe rejection of any transitory qualms.

Musical director/keyboardist Kristen Long led the rock band of Wayne Rediker, Martha Spangler and Walt Brewer. She also pinch-hit as a sometime narrator and sang one of the atypically lovely ballads, “Second Nature.”

This is the second show that Outré, formerly performing at Mizner Park, has mounted in its new home in the Abdo New River Room at the Broward Center for the Performing Arts, which has a bit of a shallow stage. Outre has wisely extended the stage and added a runway into the auditorium for the actors to invade the audience’s space. Actors make entrances and exits through the audience and might stop off at some patrons’ tables for a chat. A major improvement in the new home is the sound quality; at Mizner Park, the lyrics were often unintelligible.

One last time, there is something to offend almost everyone, the music is aimed at a younger demographic and it even runs a tad long. But for those whose preference run more to Rent than Mamma Mia, this is your acidic cup of tea.

Bloody Bloody Andrew Jackson runs through May 17 from Outré Theatre Company performing at the Abdo River Room at the Broward Center for the Performing Arts, 201 SW Fifth Ave., Fort Lauderdale. Performances at 8 p.m. Friday-Saturday, 2 p.m. Sunday. Running time: 2 hours including one intermission. Tickets are $35.40, available by calling (954) 462-0222 or visit browardcenter.org.