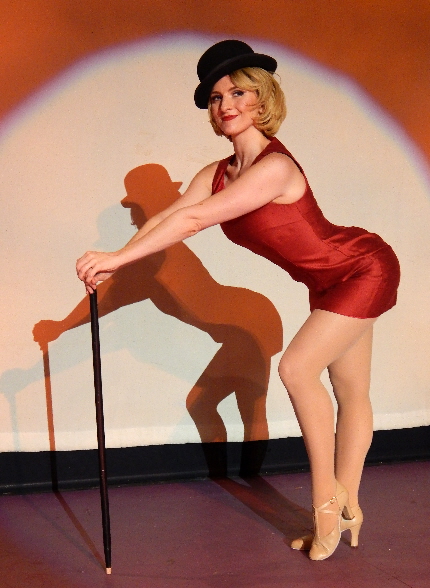 Apologies for being political, but the irony was inescapable at Wednesday’s post-election matinee of Broward Stage Door’s musical Sweet Charity that the underlying message was about optimistic hope and dreams – in the heroine’s case, searching for true love; for her friends, a better life.

With half the country in tears and the other half exulting, the dated 1966 musical about a good time girl with a heart of gold whose middle name is Hope set off a half-dozen emotions and wildly different trains of thought about how far we have come and how far we haven’t, who we were, who we are and who we want to be.

This heavy overlay was not the intention when composer Cy Coleman, lyricist Dorothy Fields, bookwriter Neil Simon, director-choreographer Bob Fosse and star Gwen Verdon created a tired businessman’s entertaining evening out of Frederico Fellini’s 1957 dark film Nights of Cabiria about a prostitute searching in vain for a lasting romantic relationship in the streets of Rome.

The raw material is a fundamentally flawed showcase that virtually no one has ever pulled off satisfyingly, but Stage Door director Michael Leeds makes a solid enough stab at it that a receptive undemanding audiences won’t mind having spent a few hours in its pleasant company.

Transported to New York in the swinging ’60s, the sanitized Charity Hope Valentine is an adorable perennially unlucky-in-love dance hall hostess who may the only person among her colleagues who does not augment her income in bed. Think Doris Day in those mild sex comedies with Cary Grant and James Garner.

We meet Charity (the winsome and winning Kristina Hugel) as she is being dumped for the umpteenth time by her latest boyfriend who steals her purse while pushing her into the lake in Central Park. Yet again, her yearning for love has blinded her to the character of her procession of paramours. She is warned once again about her naiveté by her Fandango Ballroom buddies, the hard-bitten but loving Nickie (Melissa Rapelje) and Helene (Imani Pearl Williams) who tell her, “You are running your heart like a hotel with men checking in and out all the time.”

Next, she becomes the impromptu consort at a tony night club with Italian heartthrob actor Vittorio Vidal (Rick Hvizdak) and ends up hiding in his bedroom closet as he tries to win back his old girlfriend. Charity gets marooned in an elevator with the nebbishy tax accountant Oscar Lindquist (Richard LaFleur). They take up together and Charity thinks she has finally found her soulmate when he proposes. But the course of true love disintegrates without a shred of dramaturgical credibility. This time she inexplicably (literally) finds the self-respect to pull the plug before Oscar can and then bounces back with the hope of trying once more with the next fella at the final fade out.

The truth is that Sweet Charity just isn’t that strong a show overall. It has solid musical numbers, notably the sultry “Hey, Big Spender,” Charity’s peppy “I’m a Brass Band,” the joyous “If They Could See Me Now” and the revival-flavored satire of hippies, “Rhythm of Life.”

But it struggles with a mediocre script that wanders from irrelevant production number to needless production number, all of it ending in a miasma. We’re supposed to admire Charity’s irrepressible optimism in the face of yet another emotional bruising. Granted, Leeds emphasizes the very brief last-moment uplifting element of Charity’s resilience (and a modest improvement in her sense of self-worth), making it clearer than in any other production I’ve seen. But Simon clearly added it in as a mechanical device to end the play on a positive note.

Worse, in a hoary Broadway tradition that was already eroding in 1966, musical numbers are thrown into the evening for no other reason than to have an extravaganza for Fosse to choreograph rather than to advance the story or reveal character. But by 1966, American musical theater was graduating to the narrative-driven Fiddler on the Roof and thematically-driven Cabaret.

Sweet Charity is now a period piece whose Mad Man view of the world is something Leeds and company quite wisely don’t try to fight, but which is still jarring. For instance, the standard-issue middle-class 1960s depiction of hippie culture is, as always, condescendingly ludicrous as in “The Rhythm of Life.”

Only two elements can save this material – and they are essential: a lovable charismatic personality at its core and first-rate choreography. Consider that the original relied heavily on unique gamin charms of Verdon with Fosse’s choreography; consider that even Shirley MacLaine couldn’t rescue the 1969 movie even with Fosse at the helm.

Hugel is, as required, cute, ebullient, bubbly and a host of other adjectives along with being equipped with a dynamite smile, long legs made for dancing and a strong appealing voice. What she’s missing is that magical something God gave Verdon, Bernadette Peters, Kristin Chenoweth and a few others that is indispensable to making this particular show land. That indefinable and rare quality is crucial to make Charity’s hope seem admirable rather than foolish. Otherwise, the story is about a hapless doormat who allows herself to be mistreated repeatedly in her desperate search for love and who comes close, but once again loses at the final fade out.

The capable choreography is by Danny Durr who is appearing in the adjacent theater in Swing! Swing! Swing! He favors angular limbs and joints, high kicks, pelvic pops and his own riff on the 1960s dance crazes of his parents (or grandparents). It’s not his fault but that of the script and the 600-pound gorilla Fosse that they are often the tail wagging the dog. “The Rich Man’s Frug” in a nightclub just goes on and on – three separate sections of it back to back – that have absolutely nothing to do with advancing the plot. His dancing ensemble is reasonably able although not always in perfect sync, and his leading lady is a competent if not especially magnetic dancer.

Some numbers work better than others, such as the “I’m a Brass Band” number in which Charity is joined by, yes, a brass band of dancers who even clack the floor with drumsticks.  Others fall flat including – and here’s a surprise—the famously sizzling hymn to sex for sale, “Hey, Big Spender.” In an attempt to show the girls as jaded, the number had all the electricity of a funeral cortege.

The cast is delivering pretty much what’s expected including Rasheem Ford as the hippie guru Daddy Brubeck, and Larry Buzzeo as seven different waiters, doormen as well as the dance hall manager who gets a big production number near the end.

But the standout is Rapelje as dance hall queen Nickie. At exactly one hour and ten minutes into the production, she suddenly sets ablaze what has been an amiable ambling musical. She leads the scorching juggernaut “There’s Gotta Be Something Better Than This” along with Hugel and Williams, and the show suddenly comes alive. Rapelje’s Nickie exudes a seen-it-all exterior, brays a Queens twang and owns a wicked mouth that can be twisted into an insolent glower or a having-a-ball grin. Her powerful pipes amp up the on-stage energy anytime she starts to sing.

She and some of the other actors put extra oomph in their performances thanks in part to the sure musical guidance of David Nagy.

The good news is that Leeds is such an experienced hand that he can make the most of the comic set pieces such as Charity and claustrophobic Oscar stuck in the tiny elevator, or Charity killing time in Vittorio’s closet as he seduces his old flame in the bedroom.

The set by Michael McClain features a huge heart, which splits in two for scene changes, a nice metaphor. The digital tracks by Manny Schvartzman imitates a full orchestra complete with brass and glockenspiel. The costumes are intelligently selected by Jerry Studefant including sharkskin suits and black turtlenecks for the men in the nightclub scenes. The only downside is the wigs that must have been shoplifted from the Festival Flea Market down the road.

This Sweet Charity is an adequate but not stirring production in which a lot of talented people are working hard to make something special out of a show that is nearly impossible to master.