Zoetic Stage’s Funny, Poignant All New People By Zach Braff Scores As One Of Season’s Best 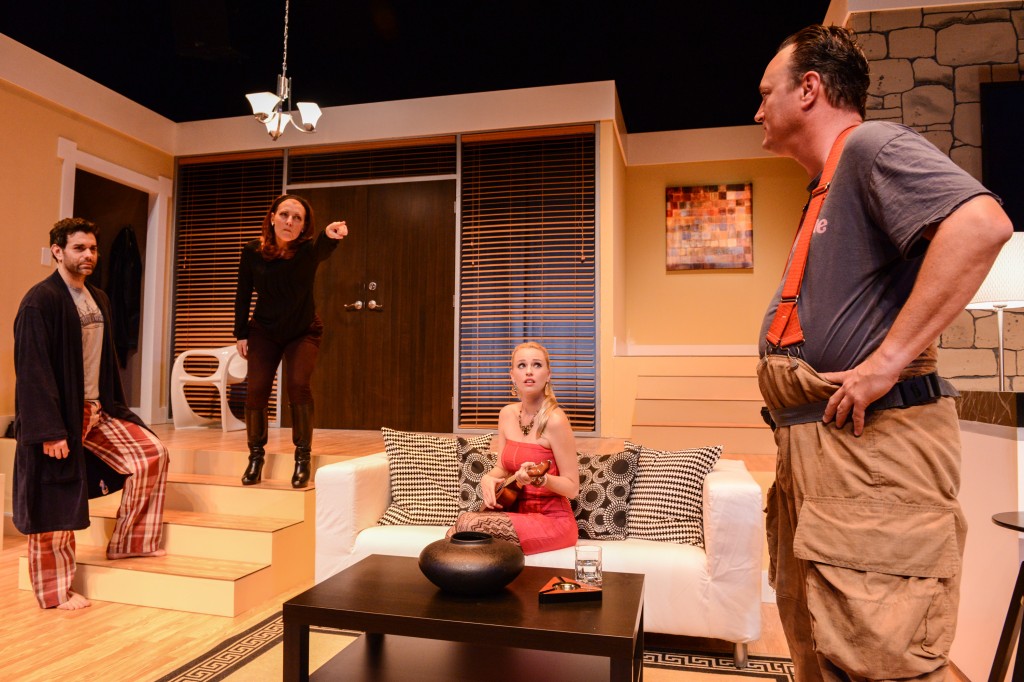 South Florida theater critics have to kiss a lot of comedy frogs before they find a prince, so we’re exhilarated when we discover one as magical as Zoetic Stage’s hilarious and touching All New People.

This is how it’s done, folks. It’s not just that Zach Braff has written a hysterical yet insightful script about four insanely disparate and damaged thirty-somethings struggling with the aloneness of being alive. What Zoetic Artistic Director Stuart Meltzer and his quartet of actors do with that material is masterful in comic timing, narrative pacing, inhabiting characters, line readings, excavating meaning, variety of tone yet unity of approach, you name it.  Did we mention it’s seriously funny?

And beyond the considerable technique, this show has what we’ve complained has been missing from recent shows: that extra dimension of humanity and heart that makes you feel that you’re not going crazy all alone in your own life.

Hopefully, you’ll be too enthralled to notice, but  Meltzer and company deftly negotiate a slow curve from wacky absurdist farce to tender compassion and later a hopeful resolution that emerges organically– and always leavening it with belly laughs.

Zoetic’s team also perfectly blends Braff’s intentional juxtaposition of the daffy and the deep within the same characters, an acting challenge that less talented thespians would not be able to believably reconcile in the same personas.

Braff, best known as an actor in the TV series Scrubs and as the director of the acclaimed film Garden State, premiered this piece to varied reviews in 2011 and then brought it to London where it fared less well. Meltzer fell in love with the script and this is reputedly the first regional production in the country.

The show opens on a snowy night on New Jersey’s tony Long Beach Island in a darkened beach house where a man dressed in pajamas and bathrobe is standing on a well-stocked bar about to hang himself – although all he has is an electrical extension cord to do it and he’s struggling to put out a last cigarette without falling off prematurely and setting the place on fire.

Charlie (Nicholas Richberg) is about to jump when the front door opens to admit a whirlwind unrelated to the weather outside: the real estate agent Emma (Amy McKenna) whose incessant and blithe chatter makes it clear that she has been ingesting some kind of illegal substance. This is the time to mention that Braff’s script is jammed with profanity, frank sexual references and copious amount of alcohol, coke, glue, pills and nitrous oxide – all of it appropriate fuel in this case.

Emma is a Brit who has illegally entered the country and is desperately trying wrangle a green card while struggling to earn a living renting out beach houses in the off season. She was supposed to meet an elderly couple to view the house although it may be that she has stumbled into the wrong address.

Even in her drugged-out self-absorbed fog, Emma knows the right thing to do is to intervene in Charlie’s suicide, even though her unending stream of perfunctory platitudes and ploys were probably learned watching Dr. Phil. One of the funnier moments is when Charlie shuts her up in mid-sentence and mid-pour from a flask by telling her that he has killed six people. In dead silence, McKenna does the most delightful reaction of slowly absorbing the gravity and the potential threat to herself, ending with her solemnly putting the cap on the liquor bottle.

But as she tries to cheerily divert Charlie in her chirpy AbFab accent, her buzz is running low, so she phones the island’s major drug supplier, Myron. Befitting his day job, Myron makes his delivery to the house in his fire truck and enters in full fire-fighting regalia. An astonished Charlie asks, “Are you a firefighter,” to which Myron drawls in dry Jerseyese, “No, I’m a gay stripper.”

Myron (Todd Allen Durkin reminding us that he has comic chops as well as dramatic ones) is a crotch-grabbing lech who brags how he picked up a woman with tales of having been in the Normandy invasion because “women want to thank the troops.”

As Charlie despairs that he will never get rid of these people so he can kill himself, in pops Kim (Betsy Graver), a sexy call girl with the IQ of a dead flashlight battery, to steal a line from Auntie Mame. Well, she is attending college – on the Internet. “I’m studying feelings,” she adds.  When Emma admits to being an illegal alien, Kim says something like, “You don’t look Mexican.”

Kim has been bought by the beach house’s absent owner and Charlie’s friend who thought she might be able to rescue him from his deep depression. Even ditzier than Emma, Kim is proud of her skill that commands $15,000 a night. She boasts “I’m the Prada of pussy.”

Charlie isn’t going to thaw easily. Pointing to Kim, he says sarcastically, “Let’s move this shindig to the fire house. They even have a pole.”

But each harbors depths, dimensions and dreams that Braff reveals a bit at a time. Each has secrets revealed solely to the audience in black and white videos projected on the home’s big screen TV. Myron may sound like Ralph Kramden, but he is a former high school drama teacher who entertains the assemblage with a competent rendition of Shylock’s “Hath not a Jew eyes?” soliloquy. He’s also an astute appraiser of human nature, accurately assessing Charlie not being capable of suicide and pointedly challenging him with some tough love.

The unlikely intersection of these people and their creation of an ad hoc family has seemed too coincidental for some viewers, and their quirks and secrets might seem manufactured, but all that misses Braff’s point. A crucial underpinning of the script turns on whether God exists and whether He has the power to affect things rather than just watch sadly what his creations do with his gifts. To Braff, God or not, the gift of companionship and compassion are miracles to be acknowledged, appreciated and taken advantage of.  It’s the fellowship in recognizing our common humanity that offers hope. “We all have pain,” Myron tells Charlie.

True, Braff’s script feels like it runs just a bit too long, although you’d be hard pressed to know where to cut it. But the comic timing and the pacing this cast executes under Meltzer’s direction is nearly flawless. Some of it is 21st Century humor that has far different rhythms than the rimshot cadences that stretch from vaudeville to Neil Simon. But there remain the classic slow burns, not of anger, but of incredulity at a particularly moronic or crass statement. There’s a wonderful bit worthy of Sid Caesar where McKenna almost physically struggles to stay silent at Charlie’s command.

Yet as silly and absurd as these people are, they never seem like cartoons in Zoetic’s hands.

Richberg (Captiva and Stuff) has the toughest challenge making the perpetually despondent Charlie not just likeable but interesting enough to be the fulcrum of the evening when Braff really only gives him a couple of emotional notes to play.  But he succeeds by delivering a genuine sense of aching sorrow under that hangdog expression.

Graver (Venus in Fur) has had several not-quite-as-dim-as-she-seems roles recently and the marvel is that she has made3 each different from the other. More importantly, Graver’s Kim brings an open honesty and sweetness to the party. Her speech about being unable to even keep her Sims alive in the computer strategy game is funny until she makes the analogy between her impotency to save them and God’s.

McKenna (South Beach Babylon and August: Osage County) nails Emma’s shakily constructed perkiness and communicates that earnest intensity that comes from struggling to focus when a mind is scrambled with whatever illicit pharmaceutical is available. Watch her laboring to wrest her attention from her own considerable woes to those of someone else.

Saving the best for last is Durkin. He fearlessly becomes this crass, sexually obsessed glue sniffer who is clearly lonely for all his macho posturing. Just as he did in Zoetic’s Captiva, Durkin delivers uniquely naturalistic line readings that most actors wouldn’t find. Even better, his comic timing, that slight pause, that extra topspin is remarkable.

Throughout, the sure hand of Meltzer is guiding every second of the proceedings, bringing the different acting styles of the four performers into a seamlessly cohesive whole. For all the crudity and excess these characters wallow in, Meltzer captures the sweetness and compassion inherent in Braff’s script.

Michael McKeever, another Zoetic co-founder with Meltzer, designed a chic beach house with flagstone walls and an African art installation that looks like an oversized abacus and figures into several pratfalls. Luke Klingberg provides evocative mood shifts with his lighting.

It’s unusual that comedies, even dramadies, get any respect, but All New People can justifiably be recognized as one of the best shows of the season.

A side note: We wrote in our essays last summer that South Florida audiences and critics get so accustomed to adequate work that they come to mistake it for excellent work. This is especially true about comedy. It takes a production like All New People to make us recalibrate our standards and remind us what excellence looks like.

One Response to Zoetic Stage’s Funny, Poignant All New People By Zach Braff Scores As One Of Season’s Best