A Funny Thing Happened On Ken Jennings’ Way To The Forum 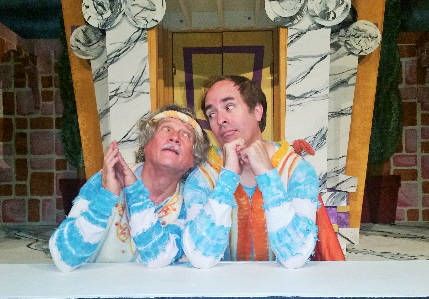 It might seem a long, long stretch for the man who created the mentally challenged apprentice Tobias in Sondheim’s pitch-dark blood-red musical Sweeney Todd in 1979 now to be playing the broadly farcical Roman slave Pseudolous in Sondheim’s 1962 A Funny Thing Happened On The Way To The Forum opening at The Wick Theatre.

But Jennings, accurately described by an assistant stage manager as “a ball of fire,” is clearly relishing the chance to show his range.

“It’s a nice change of pace. I often do so many dark shows. It’s nice to do something bright and happy,” he took a vaudevillian pause for timing” “where you don’t have people killing each other.” And then he let loose with a large loud laugh.

Immediately, the casting makes sense for a classic stage clown’s part made famous by Zero Mostel and later Nathan Lane. Seeming decades younger than his 67 years, Jennings exudes an infectious joy just sitting down for an interview.

Built like a bantam rooster, Jennings is impossible to miss in a crowd with electric blue eyes shine, a devilish grin almost as bright and a mop of bushy grey hair delightfully and anarchistically askew.

“I’m much older (than other actors playing the role) and I wondered if I was right for it,” he said between rehearsals last week in a rare moment of doubt.

But his director Bob Walton and co-star Michael Ursua playing the hapless slave Hysterium guffawed out loud when he said it.

Walton cut in. “He was in rehearsal standing on the” second floor balcony of the set during the big finale “and he asked ‘Do you want me to climb down from here?’ ”

He’ll need that energy. Forum is a high-octane musical farce based on and amalgamated from the ancient comedies of the Roman playwright Plautus, reimagined by Sondheim and famed comedy writers Burt Shevelove (No, No Nanette) and Larry Gelbart (TV’s M*A*S*H) with a decidedly vaudevillian bent.

It tells of the efforts of a slave Pseudolus to earn his freedom by hooking up his young master Hero with Philia, a virgin promised to warrior Miles Gloriosus. Drawn into the mix are the denizens of the next door brothel, Hero’s aging parents and assorted other creatures.

“People think this is a small show for some reason but there’s 18 people in the cast,” Walton said.

Although Sondheim already had Gypsy and West Side Story on his resume as a lyricist, Forum was the first show he was able to merge his two talents as both composer and lyric writer. While the lyrics are witty and involve one tongue twister, they are not as sophisticated and intellectual as many of his subsequent works such as Company and A Little Night Music.

But that because Sondheim adapts his style to the very specific needs of a piece and Forum is no different, Jennings said. “He wrote something perfect for what he had to do. It’s like a gem.”

The script is so well-constructed that even high schools have been able to make the comedy land with audiences. But Gelbart, Shevelove and Sondheim intentionally made the script a framework around which experienced hands like Jennings, Walton and their cohorts can insert every bit of burlesque comic business and byplay that they have ever learned from slapstick to double-takes.

“We wanted to start the season with something funny and fast-paced,” said Ursua who splits his time at the Wick between performing and serving as musical director, a job this time filled by Eric Alsford.

This marks the third season for The Wick, a creation of local Costume World impresario Marilynn Wick, who overhauled the former Caldwell Theater facility in Boca Raton. With her huge collection of theatrical costumes – the largest in the country – she is outfitting this production with the same wardrobe used in the 1996 Broadway revival that starred Nathan Lane and eventually Whoopi Goldberg.

Forum is one of the most reliable and frequently produced warhorses in the musical theater canon. Numerous people connected to this production have been connected to it in one capacity or another, sometimes in multiple productions.

“I was a Protean in college,” Ursua said, of the spear-carrying ensemble role.

Walton added, “I’ve done it a few times. I was Hero several times, once with Mickey Rooney, and I’ve played Pseudolus regionally.”

Jennings played the lead in college, too, as well as other roles early in his career. “But it’s been 40 years,” he said.

But it seems like a perfect outlet for his exuberance, especially the freedom to ad lib – within limits, Walton advised. Forum virtually invites the cast and creative team to bring their individual stamp to the production. “In Oklahoma, Curly is always Curly, but with this you can have some different each time. That’s the fun,” he said. Each performance may be a bit different, giving it “a little extra electricity.”

But for Sondheim fanatics, Jennings will always be the intense slightly dim street urchin in the landmark Sweeney Todd in which he becomes the serial killer’s assistant and later dispatches the title villain with a straight razor across the throat.

Like many career actors, Jennings has worked on and off Broadway for years including a stint in the original production of Side Show, but much of the time he works in regional theater productions, with TV and movie gigs interspersed.

Although he had been performing in regional theater for years before it, Sweeney was only the second Broadway show for the then 32-year-old actor. The first was a little seen revival of Eugene O’Neill’s little seen straight play All God’s Chillun Got Wings.

He has fond memories of the Sweeney experience and can tell stories upon request, such as how the Broadway version was far darker than national road tour which was what was preserved on video. Or he tells how the original cast album, which preserves his Irish-inflected voice for future generations, was recorded with microphones laid out around a stage and cast members moving about, rather than standing still in front of a stationary microphone.

But he doesn’t dwell on it. Until recently he had seen few subsequent productions except the recent film with Johnny Depp. But his 13-year-old son is appearing school plays and he has sat with him to watch the DVD of the 1979 production that was filmed for television with George Hearn in the title role as well as a YouTube bootleg of the original Sweeney, Len Cariou, plus the recent PBS concert version with Bryn Terfel and Emma Thompson. “He said to me, Emma Thompson doesn’t look very scared of him.” Now his son is using the wordplay song about victims baked into pies, “A Little Priest,” to audition for school play parts.

Jennings has come to terms with being best known for that work, although he knows some people hear his name and thing of the Jeopardy world champion with the same name. While he has his own Wikipedia entry, he’s also linked to the quiz show champ’s entry with the line “For other people with the same name, see Ken Jennings (disambiguation.)”

But Tobias has been a help. “I started to ask how can I use it?” In fact, it has helped him get his foot in the door at some auditions. He admits even entering the audition on rare occasions singing his trumpeting lines from competition scene between Todd and the barber Pirelli: “Ladies and gentleman, may I have your attention, puh-leaze!”

This entry was posted in Features and tagged Ken Jennings, Stephen Sondheim, The Wick Theatre. Bookmark the permalink.