An Absurdist Take On Celebrity Worship At PB Dramaworks 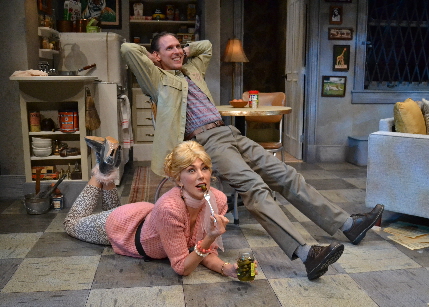 In October 1965, Pope Paul VI visited New York City, his first trip to America. The reaction locally and across the country was bigger than when the Beatles had played Shea Stadium two months earlier.

The brouhaha surpassed religious veneration and crossed into a fervent mania that inspired fledgling playwright John Guare in 1971 to pen an absurdist black comedy play that Beckett might have admired, The House of Blue Leaves.

Almost a half century later, with similar insanity ratcheted up exponentially, Palm Beach Dramaworks is reviving the funny, poignant script about a Queens family whose life is turned inside out. Ordinary people unconsciously spurred by the papal visit will seek validation of their own worth by pursuing celebrity for themselves – or at least vicariously by their idol worship.

The denizens include zookeeper Artie who dreams of being a Hollywood screenwriter, his schizophrenic wife Bananas being railroaded into the titular insane asylum, their son who is AWOL rather than going to Vietnam, and three nuns hoping Artie’s apartment will give them a perfect view of the Pope’s motorcade.

Palm Beach Dramaworks is one of the few local companies willing to even attempt absurdist theater let alone triumph with it as it did with Exit The King in 2013 and The Chairs in 2008.

The latter was helmed by resident director J. Barry Lewis who has been excavating the themes of Leaves, which opens this weekend.

Why are the Kardashians, the various Real Housewives celebrated? “Because we gift them that forum to do so,” Lewis said. “We think they have something special that we don’t…. We get blinded by the light. We lose our way.”

He added that people think “There are those who have been chosen, who have stardust sprinkled over them, and then there’s the rest of us (who believe they are) a nobody and want to be noticed.” We have dreams and when they are frustrated or fail to materialize, tragedy ensues, he said.

He believes that Leaves alternatively encourages “we’re all the same and we all have value and no one is better than another if we look past the trappings.”

Absurdist theater requires the audience and artists to willingly slip into a different reality that mixes hilarity and pathos, with each sometime hiding just below of the surface of the other. It isn’t the simple smiling mask / frowning mask used to represent theater, he said. In an absurdist tale, “One day it may be funny and the next day it isn’t.”

For instance, Artie and his girlfriend Bunny are hell-bent on escaping this plebian existence, jettisoning anything and anyone who stands in their way. Bananas is, indeed, bananas. Yet Guare wants you to relate to them as individuals deserving of some measure of compassion, he said.

One reason absurdist theater isn’t done frequently is because it is difficult amid the ludicrous happenings and risible characters to find and then communicate the unique vibe to an audience.

“It’s a very unique challenge, a complex of what characters say and what they do. You have to walk a very fine tightrope,” Lewis said. “There are no specific techniques, but you have to make sure the narrative story line is as clear as possible even with all the lightness and tomfoolery.”

The 1986 Broadway version of the off-Broadway original was directed by Jerry Zaks with John Mahoney, Stockard Channing and a memorable Swoosie Kurtz as Bananas and it was nominated for almost every Tony Award possible and won several.

This edition stars Bruce Linser (The Man In The Chair in the Wick’s The Drowsy Chaperone) as Artie; Vanessa Morosco (Arcadia) is Bunny, and Elena Maria Garcia gets to click off what she said has been an entry on her bucket list as Bananas. Also in the cast are Irene Adjan, Jim Ballard, Austin Carroll, Elizabeth Dimon, Margery Lowe, Krystal Millie Valdes, Timothy Bowman and Pierre Tannous.

The House of Blue Leaves runs May 17-June 2 at Palm Beach Dramaworks, 201 Clematis St., West Palm Beach. Show times are 7:30 p.m. Wednesday, Thursday and some Sundays; 8 p.m. Friday and Saturday; and 2 p.m. Wednesday, Saturday, Sunday. Post-performance discussions follow Wednesday matinee and Sunday evening performances. Individual tickets are $75, and opening night tickets are $90. Student tickets are available for $15, and Pay Your Age tickets are available for those 18-40. Tickets for educators are half-price with proper ID (other restrictions apply). Call (561) 514-4042, or visit palmbeachdramawork