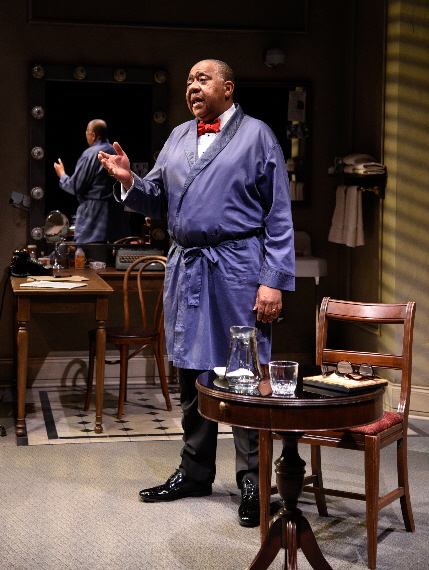 If his resume wasn’t already unusually diverse for a theater critic, it might seem strange that Terry Teachout is adding “director” to his hyphenated professional description when his play Satchmo at the Waldorf opens this month at Palm Beach Dramaworks.

But the Wall Street Journal critic, who has shone a national spotlight on the rise of regional theaters, is helming his acclaimed one-man play about Louis Armstrong that already has had nine productions and is slated for three more.

“I have loved all of the stagings of the play I have seen and I will be stealing stuff,” he quipped during a phone interview the day before flying from New York to West Palm Beach.

“But I have always had, from the beginning, feelings how I would approach it. This production is going to be different in a lot of ways large and small from its predecessors.… I’m not doing it to get it right; it’s been right; I just want to find another way. It can stand multiple approaches and profit from being seen in different ways.” 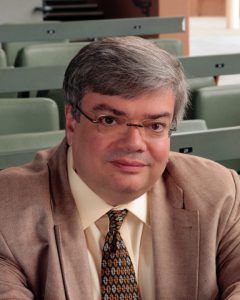 It marks the professional directing debut of the man whose career has encompassed an early career playing bass as a jazz musician; authored four arts-related biographies including one on Armstrong; librettist for three operas with composer Paul Moravec; created of one of the first nationally-recognized arts blogs, About Last Night, which deals with a variety of art genres; edited other books; wrote recording liner notes; and serves as the critic-at-large of Commentary. While he reviews New York shows, he also travels the country as arguably the only national critic reviewing the work of regional theaters such as Dramaworks and GableStage.

Satchmo is a fictional – if highly likely – peek at the legendary trumpeter/bandleader unwinding in his dressing room immediately after what would be his last major gig before his death in 1971. He muses to an imaginary visitor and dictates into a tape recorder memories of his life and career. Several times, he charts his complex relationship with Joe Glaser by impersonating his white Jewish manager. Later, he bemoans the backlash of the black community against his amiable image with the white public, a situation Armstrong illustrates by impersonating an acerbic Miles Davis, then the young Turk of the trumpet.

Teachout thinks the root of its popularity is clear: “It’s Pops himself,” he said, using Armstrong’s frequent nickname. “He’s just a great man and a great spirit. People remember him vividly. He’s really still present for us and people just like the idea of having the opportunity to spend an evening with him.”

Satchmo, Teachout’s first play, was first drafted around 2010 at Rollins College’s Winter Park Institute. He staged a workshop production of the first half at the same venue the following year – his only significant directing experience. The work moved through a major rewrite and several productions, notably a successful run off-Broadway in 2014 with John Douglas Thompson. This edition will star Barry Shabaka Henley, a veteran stage, screen and television actor, who performed the role at the Court Theatre in Chicago this past winter.

Teachout has no formal training as a director or playwright, although he acted in high school and college. But he had the advantage of being exposed as a critic to a huge number of object lessons. “I had been seeing about 100 shows a year, writing and thinking about them in an analytical way.… I learned a lot (about playwriting) by negative examples. Every time you see a show, you see how a show works and how an audience responds…. You will come away every show good or bad with a better sense of how to make it work.”

The incipient playwright knew “Most one-person plays about historical figures are nothing more than acts of collective adoration. They don’t have much conflict, sometimes none at all.  They don’t convey the complexity of the subject. They feel spineless. (Director) Gordon Edelstein calls them taxidermy plays. They spend 90 minutes up there telling you how great they were.  So having reviewed dozens of shows, I knew I didn’t want to write that. “

Instead, he said, “I needed to build conflict and darkness into the show, and part of that was having one actor play more than one role, and to have the actor cross the racial line. That’s the dramatic motor that drives the play and a surprise and challenge to the audience.”

Additionally, the play “would be tossing red meat to an actor who would eat up the chance to do that,” specifically because “there aren’t that many plays (with a single part) custom-tailored for a black actor. I’ve seen a lot of August Wilson productions and I’ve seen a lot of really wonderful middle-aged black actors who never get the chance to do something like this. So this is a kind of valentine to these guys.”

But to learn the director’s pervasive and detailed tasks, he shadowed the formative productions of Satchmo and questioned the directors Rus Blackwell, Charles Newell and Edelstein. “They were my directing school.” He also studied three books about stage directing by Alan Ayckbourn, William Ball and Frank Hauser.

The directing ideas percolated, but they did not coalesce until Teachout was asked to direct the work by Dramaworks’ Producing Artistic Director William Hayes and Managing Director Sue Ellen Beryl. They had met when Teachout gave strong reviews to several Dramaworks’ productions, starting with The Chairs in 2009.

Teachout wrote later, “I figured I’d never get a better chance to see what I could do with the finished play, so I said yes to Bill and Sue Ellen without much hesitation, and since then the production has rarely been far from my mind.”

Since the invitation, Teachout has been sandwiching the preparation around his other duties reviewing New York work and traveling around the country. It’s been an unusually busy season. Admitting last week to being “underslept,” he detailed that he also has been seeing and reviewing a spate of Broadway shows before the Tony Awards cutoff date, premiering an anthem for chorus and orchestra called Music, Awake! with Moravec and performed by John Sinclair and the Bach Festival Society of Winter Park, back down to Dramaworks to begin rehearsals, one night back to New York for a review of the last show of the season, and then back to rehearsals.

“I know I have prepped to the hilt….  Rehearsal time is not ridiculously long.” That included conversations with Henley about how this production would differ from the one Henley had done in Chicago for Newell.

In the Chicago casting, Henley’s hiring was sealed when the team saw a film clip of Henley as an old jazz musician dealing with Tom Cruise in the film, Collateral. When he auditioned, “He blew just everyone away,” Teachout recalled.

So with the Dramaworks project in mind, “I was involved in the rehearsal process out there (in Chicago). Two weeks in, I said to him, ‘Would you do it again, this time for me’, and he didn’t just wanted to do it once. So we made the deal.”

Henley spent six months in Miami in 2005 shooting the film of Miami Vice, while Hurricane Katina ravaged the home town he shared with Armstrong.

This return to Florida gives him a completely different approach to the piece because the Chicago production which closed Feb. 12 was almost surreal, set in a kind of nameless purgatory. This production is designed to be naturalistic.

Henley has worked with a playwright in the rehearsal hall before; in 1998 he acted in overhauled rewritten version of Jitney with August Wilson present through the creation, through a New York production and over in London. In that case, “in some ways, at times, the presence of the playwright outweighed the presence of the director.”

But he is not daunted working with a playwright who is also the director. In some case, “a director who has written his own work doesn’t often have the distance to” see the work objectively, “but Terry is not like that; he’s a flexible enough human being…. If he hears the words coming out and they’re not the way he heard them (when writing it) but it’s working, he’s 100 percent behind it.”

While it may seem strange that he is juggling theater criticism and theater creation, Teachout revels in it: “The whole process in making theater is especially exciting to me. I spent the first part of my life writing, sitting in a room by myself, but this is… boy, I can’t enough of the joy of collaboration.”

Teachout isn’t leaving his day job and does not expect it will interfere with his other roles. He scrupulously will avoid reviewing for a few years any company that produces his work or hires him to direct.

But “if this goes well, I hope I’ll get other chances to direct. Maybe I’m kidding myself, but I have a good feeling.”