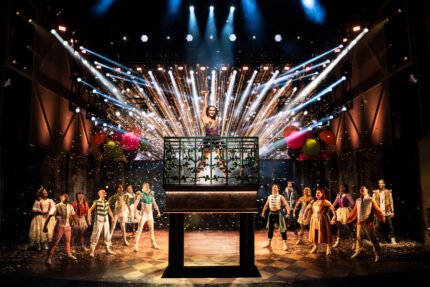 Lorna Courtney and the cast of & Juliet / Photo by Matthew Murphy

Embarrassing admission: This critic is of a certain level of life experience, shall we say, that while he recognizes the names of Katy Perry, Ariana Grande, Britney Spears and Pink from their appearances on Saturday Night Live, he wouldn’t be able to name a single one of their songs unprompted and can only recognize a few like “Oops!… I Did It Again.”

I admit this because the score of the new musical & Juliet is totally pop tunes co-written by Max Martin that apparently have made up the majority of Top Ten list over the past couple of decades and delivered by the aforementioned pantheon.

The point is that while the younger audience at & Juliet is beyond delighted how more than 30 of these beloved 21st Century standards were slipped into the plot, you don’t have to have a scintilla of familiarity with them to have a terrific time at this hoot of an evening.

The technique is hardly new; think Heads Over Heels or Mamma Mia (okay, please forget Mamma Mia). But Martin, book writer David West Read (of Schitt’s Creek fame), director Luke Sheppard and an ebullient cast do it with sheer joy and a wry wink at the audience with each inventive insertion.

The power plant energy and grins wider than any Cheshire Cat’s are undeniably infectious, not to mention a tidal wave of sound they can probably hear in Jersey.

The premise has a smart, sharp Juliet with an independent spirit deciding not to commit suicide upon learning of Romeo’s death – a suggestion from Will Shakespeare’s wife Anne who is emerging from the traditional straightjacket of Elizabethan marriage. Instead, Juliet (who learns at the funeral that Romeo fooled around with every teenaged girl in Verona) heads off to Paris with her gay friend May and her nurse to discover who she is. But after hitting the clubs, she gets engaged to handsome young Francois, although he is slowly discovering his sexuality and is attracted to May.

Juliet struggles with having just escaped a controlling family and a likely restrictive marriage, and now a similar situation in the offing. A spoiler crucial to understanding the ethos of this piece: In the end, there are several marriages and conventional happy endings, but Juliet triumphantly moves forward into the future without being committed to anyone but her own path.

But as Juliet’s self-actualization evolves, on the side we find Will Shakespeare and Anne Hathaway in a play-within-a-play trope wrestling about what new turns this new narrative should take. Anne takes the quill pen out of Will’s hand in a symbolic gesture. As the play continues, the two write themselves into the story as they work out an equality in their own marriage.

While empowerment has become a line on a checklist these days for film and television, something about all this here lands more like a genuine celebration of the modern-day feminism and gender equality.

Since Martin is not taking his own work seriously, no one will spend much time noting that many of the lyrics have about as much weight and insight as Backstreet Boys Greatest Hits. Sondheim this is not. But it’s not meant to be.

West’s script, which fuses Tudor and Gen Z, loves to insert into conversations at least two score or more memorable iambic pentameter lines from Shakespeare (for humor’s sake) that anyone with a G.E.D. will recognize – a literary analog to inserting Celine Dion music into the plot.

The cast is so clearly having the time of their lives, starting with Lorna Courtney as the belting Juliet who would put those television talent-show contestants to shame. Then there’s Betsy Wolfe as the wonderful Anne, Stark Sands as Will, and, in a real surprise, noted opera baritone Paulo Szot (Emile in the South Pacific revival) clowning around as the nurse’s old flame and Francois’ father.

This production has a lengthy parchment list of virtues including kinetic choreography by Jennifer Weber executed by the most tireless, hardest-working, most infectiously enthused ensemble we’ve seen in recent years.

“Great” musical theater, it isn’t. But thoroughly entertaining it is.

This entry was posted in Performances, Reviews and tagged & Juliet. Bookmark the permalink.