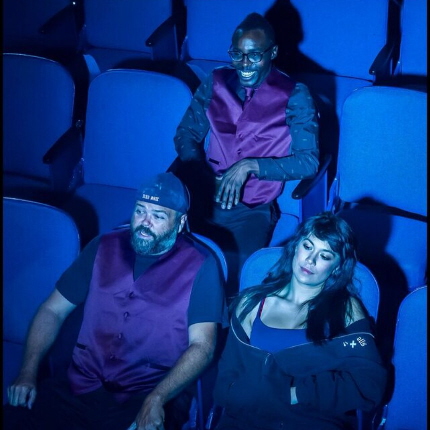 David Nail, Chevi Hill and Jessica Farr as employees taking a breather while cleaning up an old movie theater in The Flick at Mad Cat Theatre Company / Photos by George Schiavone

South Floridians can thank Annie Baker’s script to The Flick for keeping Paul Tei in theater.

The actor/director/producer/playwright/designer who founded Mad Cat Theatre Company 16 years ago was profoundly dismayed at the public and critical reaction to his decidedly off-beat rethinking of Neil Simon’s The Star Spangled Girl in the winter of 2015.

“I was thinking, ‘I hate theater. I’m not doing theater again, just original works, just do concerts, some comedy,’ ” he recalled last week amid the rehearsal period for the piece that opens for Mad Cat on May 26.

But the buzz was inescapable about this winner of the 2014 Pulitzer Prize, which, in a daringly naturalistic manner, follows three young people working menial jobs on a single long shift in a deteriorating movie theater in central Massachusetts.

Neither Tei nor his girlfriend and artistic partner, Jessica Farr, had seen the show, but he got a copy of the script from a friend. He wasn’t optimistic; he hadn’t read a Pulitzer-winning script that he thought that fit Mad Cat’s singular aesthetic since Robert Schenkkan’s 1991 The Kentucky Cycle.

But the Baker piece “was hot like a potato… This play is perfect for what I was trying to get to do for a while,” he said. As director-producer, he started pursing the performance rights. There was little local competition.

“It was the first time I had seen characters that I thought were really representative of the views of American youth right now. I mean I look at the three characters; I’ve never seen these people on stage before.”

The passion in Tei’s voice intensifies. “At first read, you kind of go, “OK,’ and then as you really delve into it, it stays with you.”

The play, which clocks in at three hours with one intermission, on one level just tracks this shift in which the employees banter but frequently spend long periods without dialogue just sweeping up the audience’s debris. The “ushers,” who are really the clean-up crew, are Rose (Farr), who also runs one of the last 35-millimeter projectors in the state; Sam (David Nail), only slightly older who thinks he has been passed up for the prestigious job of projectionist, and Avery (Chevi Hill), the newest employee, a young African American with an encyclopedic knowledge of film. But under the everyday conversation, the three characters are involved in emotional interpersonal conflicts.

Further, the three are grappling with social/technological change: this aging one-chamber movie house is endangered because it still uses a single 35-millimeter projector while the rest of the industry is going digital in multiplexes.

As a look at the workplace, this subsistence job resembles that of so many Millennials and younger trying to figure out how to make ends meet in a world they had been promised would be milk and honey. “They are the endangered species, the working middle class,” Tei said. “It reminds us of what it means it be a working American and how problems outside the workplace seems like an extravagance that we cannot afford to deal with.”

Throw in gender and racial politics as well. “The politics of this world (of the play) are a microcosm of what is happening in this country,” Farr said.

One added attraction is the setting itself. Mad Cat has been a resident at the Miami Theater Center in Miami Shores since 2013, usually using its smaller adjacent Sandbox black box theater. But for this, Mad Cat will move into the main house, an actual Art Deco-style movie theater dating back to 1946.

The kicker is that since the play focuses on the employees cleaning up the auditorium or threading film in the projection booth, the action will take place in the seating area and the audience will watch from the stage as if they were the movie screen.

The film aspect was another enticement to Tei. “The piece is steeped in very specific films; you can see Annie Baker just drenching this with movies like spices. That excited me because I didn’t grow up with theater, I grew up with film.”

He personally reviewed the six film that Baker told a New York times reporter influenced her play: Sherlock Jr. by Buster Keaton, Francois Truffaut’s Jules and Jim, Ingmar Bergman’s Fanny and Alexander, Quentin Tarantino’s Pulp Fiction, Woody Allen’s The Purple Rose of Cairo and the rare Four Nights of a Dreamer – all films with an analogous love triangle that propels the plot.

Tei knows the running time and well-publicized pauses may chill some patrons considering whether to attend. But “it has never felt like we are pausing for the sake of pausing or that it is taking longer than it should. It feels like you are watching things unfold in real time. It’s as close to realism as I’ve seen.”

He added, “The signature thing that we try to deliver at Mad Cat obviously is theater that you think about. But I want people to leave digesting it. They may be chewing on it and it hits them a year from now, six years from now. Maybe it’s something that we may never fully digest.”