Affecting ‘The Tin Woman’ Plumbs Depths of The Heart 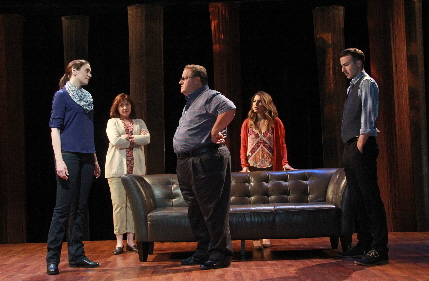 Jennifer Christa Palmer, left, as the heart recipient faces the family of her donor:  Laura Turnbull, Ken Clement, Natalia Coego and the ghost of the donor Cliff Burgess in The Tin Woman at Actors Playhouse / Photo by Alberto Romeu

A double sense of “life after death” pervades the touching and beautifully rendered The Tin Woman drama suffused with wit now playing at Actors Playhouse as spring slides into summer.

Sean Grennan’s play is spiced with a bit of the afterlife in its arc, but it’s more focused on how the living cope with and prevail over the loss of someone close, and our responsibility to live life fully, a compact in exchange for that gift.

Grennan’s generally insightful script has a few tactical flaws, but even they disappear in the hands of this uniformly superb cast and director who clothe Grennan’s more stock constructions in a totally credible emotional truth that resonates with our own lives.

We cannot go one more paragraph without a preview of the coming praise for the precise skilled portrayal of a deeply wounded father by Ken Clement under David Arisco’s direction. Every couple of years someone gives him a part that he just blows outs of the ballpark. This is another one.

Downstage in a New York City hospital, The Tin Woman centers on Joy O’Malley, a 30ish graphic artist, who has just received a heart transplant. But upstage in a well-appointed suburban home is the family of Jack, a young man who died in a traffic accident and was the donor of Joy’s new heart. Wafting gently through both scenes is the physical but silent spirit of Jack.

As months pass, Jack’s family members deal with the tragedy differently, but the aching mourning persists with no sign of relief. The father is shut down other than bitter, angry outbursts. As his wife says to him in frustration, “The next time you talk about your feelings will be the first time.”

But the ill-named Joy is dealing with it no better. She is consumed with guilt and the profound question “What do I do now?” This second chance plagues her with an impossible responsibility to live her statistically numbered years with outstanding achievement and a stop-to-smell-the-roses ethos – not just for herself but for the man whose death gave her life. She spirals into a paralyzing depression, unable to get out of her bathrobe and sweatpants, damaging her body with liquor and junk food. There’s irony in The Wizard of Oz reference of the title in that she feels she has a physical heart, but she and Jack’s family have lost their spiritual heart.

As she explains later, she was so discouraged by life that “when you’re dying…finally, finally, you get used to the idea. There’s an upside, cause the world is…that kid is going to stop spitting at you. And it’s a relief! I was relieved. But then, then, “We have a donor, you’re saved, you’re saved!” I should have turned it down. But I chickened out. And here I am.”

It doesn’t take much imagination to guess what happens next: Joy and the family meet. What the script and the production do so well is examine with honesty and compassion how such a traumatic dinner turns the inevitable pain  into something strong that nurtures everyone’s ability to move on with meaningful lives that make the most of what seemed a meaningless random tragedy.

The last ten minutes of the play may be schematic and manipulative, but Arisco and company have executed them so well with such integrity and courage that the theater echoed with many unsuccessfully stifled sniffles.

Grennan’s earlier plays championed by Actors Playhouse – Married Alive!, Another Night Before Christmas, Making God Laugh – have never sent this critic seeking out superlatives. He tends toward a mixture of family or extended family comedy-drama that landed reasonably well but were so forgettable that you have to search the Internet to remember what they were about.

But this 2014 work is a far more mature, deftly-crafted and accomplished work. It invests his favored qualities more carefully and wisely. For instance, Jack’s grown sister says she hopes the planned dinner meeting will bring closure, but, in fact,  Grennan acknowledges that the realistic goal is less likely closure so much as an imperfect peace that enables a moving forward.

For what must be the 20th time, this work reminds theatergoers that Arisco, an acknowledged master for staging musicals and light comedy, knows how to excavate the emotion and pace the proceedings of more serious material. It’s only the frothier preference of his audience that blocks him from exploring such work more often. The staging is smoothly fluid and he lets the piece breathe with characters taking time to silently weigh their angst.

But he also has a skill at casting and he has nailed this one. The father derides the prospect of the meeting by jibing that this is not a made-for-TV-movie. In fact, that is exactly what this show sounds like described on paper. Other than Grennan’s use of copious humor, what rescues it from a Lifetime Network Very Special Hallmark Family Presentation is this cast.

Jennifer Christa Palmer, whose only local appearance was as the secretary in the hapless Scott and Hem, succeeds as the fulcrum of the evening, winning over the audience even though Joy is desperately unhappy, even as society expects her to spin cartwheels, help street beggars and roll around in fields of flowers. The audience aches for her as she struggles with feelings of emptiness and fear of failing her resurrected chances, herself and her donor. Looking a bit like Kristen Wiig, Palmer embraces that darkness by deftly spinning Grennan’s gallows humor, martini-dry rejoinders and self-deprecating jokes that lighten the evening.

Laura Turnbull’s name has become synonymous with naturalistic depictions of recognizable fellow human beings grappling with difficult even extreme situations.  As Jack’s mother, she never coasts, never hits a false note, just inhabits this woman who is not only dealing with her own grief, but trying to cope with a husband who has completely cauterized any emotional reactions and thereby human connections. But her two best moments are silent: Watch her transfixed expression as she listens to music on Jack’s Ipod that seem like his soul brought back, or the look of reconciled peace when Jack’s spirit touches her shoulder near the finale.

Natalia Coego, memorable in Bad Jews and New Jerusalem, faithfully and skillfully and energetically does exactly what the script asks for in creating Jack’s sister, Sammy, an over-eager, trendy vegan, New Age sort. It’s no criticism of Coego or even Arisco that this is where Grennan lets down the play. Sammy is a cartoon and while the play intentionally mixes humor and pathos, this character is written way the hell over the top and belongs in some other play.

Cliff Burgess does a fine job as Jack’s spirit who occasionally intervenes. Although he has one fiery flashback with dialogue that we won’t spoil, he glides through most scenes a silent observer exuding that profound compassion that Emily does in the prosaic family scenes in the last act of Our Town.

Lela Elam is so good at creating outsized characters that her Caribbean nurse and later, Joy’s “watcha doin’, girlfriend” sitcom girlfriend, somehow do not upset the play’s tone like Sammy does.

And finally, Clement.  He often gets cast as jovial characters like his Santa Claus in the national tour of Elf. But astute directors see his capacity for putting across menace, fury, regret and loss with multi-levelled nuance. He’s probably tired of my mentioning it, but his turn as the betrayed promoter in Inside Out’s Faith Healer and as the charming then chilling Satan in The Seafarer are standout moments in local theater.

Once again, his emotionally blunted father initially might seem just curmudgeonly and rigidly insisting in the fiction of putting the tragedy behind him. But without hammering it, Clement makes it clear that the father is sublimating, downright fleeing the truth so completely that he may not even be aware of it himself. The inevitable explosion of emotion in a development we won’t spoil is volcanic and frightening, yet completely believable despite that the situation and the words are border dangerously on cliché. Even more remarkable is how he makes the father’s later transformation completely credible.

Shout-outs, too, to Eric Nelson’s evocative dappled lighting, Jodi Dellaventura’s elegant set and especially Shaun Mitchell’s choice of gentle evocative folk pop music, which both covers scene changes and stands in for the music that Joy and Jack shared (in that case, songs from the musical Once).

The question in The Tin Woman is not whether Joy’s body will reject her new heart, but will she reject and Jack’s family reject the life it has bought. The answer makes for a poignant and uplifting evening.

The Tin Woman plays through June 12 at the Actors’ Playhouse at the Miracle Theatre, 280 Miracle Mile, Coral Gables. Performances 8 p.m. Wednesday-Saturday, 3 p.m. Sunday, and 2 p.m. Wednesday May 25. Running time 1 hours 40 minutes with one intermission. Tickets $53 Friday-Saturday, $45 other shows. The theater offers a 10 percent senior discount rate the day of performance and $15 student rush tickets 15 minutes prior to curtain with identification.  Visit actorsplayhouse.org or call (305) 441-4181.

Note: Actors’ Playhouse has partnered with the University of Miami’s Life Alliance Organ Recovery Agency to promote the success of organ, eye and tissue donation, and the need for registered donors. Post-show discussions with Life Alliance and members of the show’s cast and creative team will take place every Friday evening and Sunday matinee (excluding May 20 and June 12). Audience members will also have the opportunity to sign up onsite to become an organ donor.