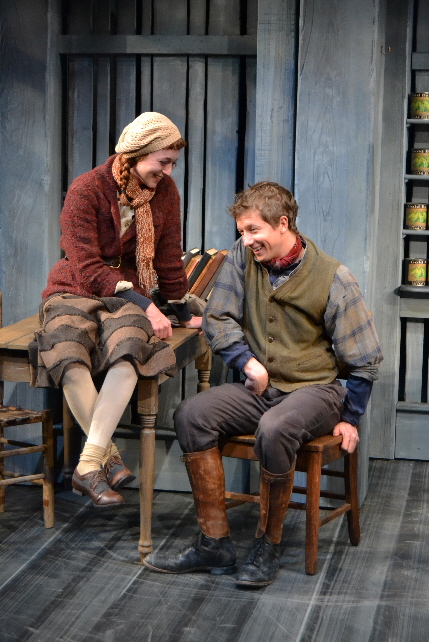 To avoid spoiling the specific emotional U-turns, all that veteran theatergoers need to know about The Cripple of Inishmaan opening at Palm Beach Dramaworks this month is that it’s a classic exemplar of the Martin McDonagh oeuvre that alternates raucous raunchy wit and heart-searing tragedy, sometimes punctuated with bloody violence.

“It tends to put audience members through the ringer because you’ll have a lot of hope one moment and then… he completely takes it away from you,” says actress Adelind Horan, who first saw the play as a young child.

“It’s farcical at times, but in a weird way. It’s that balance between comedy and tragedy. There’s something very kind and dark and strange about all of it.”

The acclaimed Irish-British playwright/filmmaker responsible for
The Beauty Queen of Leenane, The Lieutenant of Inishmore and In Bruges has once again set this concoction in the slightly fictionalized but real life insulated isolated community on an island off the western Irish coast.

In this case, a crippled orphan sees a chance at escaping the suffocating community when a Hollywood filmmaker comes to the region to make a film – based on a real event when famed documentarian Robert Flaherty made Man of Aran in the region in 1934. It’s a world of quirky characters who talk to stones, hide candy and try to drink themselves to death.

The title character Billy Clavan is played by Adam Petherbridge on his first visit to South Florida. Petherbridge came across McDonagh’s work while in college a decade ago and has read all of his plays since then, using some of them for scene work in grad school and seeing a production of Cripple brought to the United States by Druid and Atlantic theater companies.

In rehearsals last week, he was settling into McDonagh’s world of loving yet borderline cruel neighbors. “What gets me is the fact that he doesn’t allow anything to be judgmental. Anytime he gets close to that, he pulls out the rug…. A lesser playwright might paint a quiet pastoral picture and sweet funny Irish people and you think it’s going to have a picture book fairy tale ending. Instead, he puts it on its back and really hits you over the head with a surprise that makes you distance yourself. There’s always violence and brutality. It’s a kind of a roller coaster ride.”

The cast worked two and half days with a vocal coach on creating authentic sounding accents (the western Ireland patois is different from other parts of the country) but Petherbridge had a leg up because he’s worked on three other shows based in Ireland.

Horan plays Helen McCormick, a rough, mouthy woman who Billy has a crush on. “She’s constantly yelling and putting people down,” so the challenge for her has been finding lighter moments of sweetness, she said.

“You can read (the script) as if every single moment is a zinger, but it seems very truthful, it seems very real. It’s a lot of going back and forth between extremes. You’re laughing so hard and you feel you want to cry.”

She has been aware of the playwright much of her life because she comes from a family of actors in Virginia who were fans of his work.

Petherbridge says the play exemplifies Dramaworks’ mission statement of theater to think about including the idea that it, indeed, does take a village to “raise” Billy.

“You can think and learn from the experience but you are also able to laugh out loud and have a really, really fun time as that progresses. It doesn’t hit you over the head with a message, but it is about a lot people trying to find love,” he said.

This entry was posted in Features and tagged Martin McDonagh, Palm Beach Dramaworks, The Cripple of Inishmaan. Bookmark the permalink.