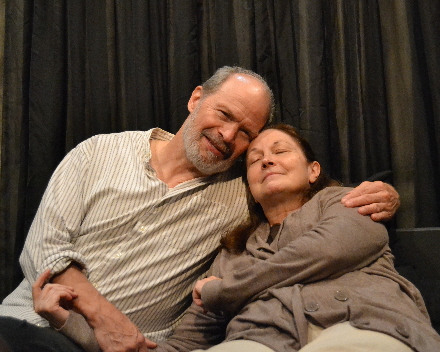 As he relates the philosophy of his title character in the musical Zorba, William Parry’s acting chops are so second-nature that he probably doesn’t realize that a slight Greek accent is slipping into his warm deep baritone and a brio is filling the small, hot conference room at Palm Beach Dramaworks.

Zorba “has a great line in there about, ‘I believe at grabbing at life. Every minute is a new minute. Every second is a new second.  It never happened before.’ ”

For just a moment, the role fills him, but even afterward, the character’s joy of living stays in the room. Zorba is, of course, Zorba the Greek, the heart of Nikos Kazantzakis’ 1946 novel, the 1964 film version with Anthony Quinn and the lesser known 1968 musical with a score by John Kander and Fred Ebb of Cabaret/Chicago fame and a book by Joseph Stein of Fiddler on the Roof.

Parry is embracing the character in the staged concert version playing at Dramaworks for two weeks beginning Friday.

Even after more than 40 years acting on Broadway, regional theaters, television and national tours, Parry is not a marquee name.

But that distinctive voice is instantly recognizable to any fan of Stephen Sondheim who has listened to his musicals on CD over and over. Parry may hold the record for creating roles in more New York bows of Sondheim’s work than anyone else (although he demurs that he doesn’t know that for certain): the angry boatman and the Texas museum curator in Sunday in the Park With George, both Gerald Ford and the shooting gallery proprietor who invites everyone to come shoot a president in Assassins, an Italian Army lieutenant in Passion, and Papa Mizner in Sondheim’s last original work, Road Show about Florida’s Mizner brothers.

And now he is Alexis Zorba, the ebullient force of nature who hooks up with Nikos, a young American come to Crete to open a mine. It is, Parry says, a show full of yin and yang: a savoring of life in the shadow of loss and death on the hardscrabble rocky terrain—both emotional and geographical – of small town life in 1924.

“It isn’t Oklahoma. It isn‘t a broad expanse of music that extends out over the horizon. But it’s kind of digging into people’s lives,” he said.

He never saw the musical and hazily recalls seeing the film when it first came out. But he became enthralled with the material after signing up for the audition, thanks to the CD of the score and the script. Earlier this week, he was finishing off reading the original novel that provides him even more insight into his role.

He is now hooked with the story’s alternating light and darkness: “The lessons that Nikos learns from Zorba are not Pablum, they’re not treacly.” In fact, while some people have compared Zorba to Tevye, Parry says they are exact opposites.

“Tevye is a reflective man who goes to his God and asks how do I deal with this; he weighs those notions and tries to figure what the right thing to do is. That’s the antithesis of Zorba. It’s not that he doesn’t have question. He has a lot of things he has wrestled with.  But that’s not in the front of him. He is what people say is ‘living forward’ as opposed to living in the past. He takes in what has happened, he deals with it and he moves on because, if you don’t, it’s death, at least of your spirit.”

“He says at the end we die every day by not living. He loves life. He loves women. He takes life in in big handholds…. People die in this show. People are killed in this show.  But through it all there’s a sense of us as human beings embracing life.”

Parry, who is in his mid-60s like Zorba, has taken some of that to heart himself. “I am cut from that cloth in some ways, but I’m much more a Tevye weighing things …, (rather) than a person who can just more readily say we have to go on. But I think I was more of the former as I was younger and as I got older I find myself more in the Zorba camp … as you hear the clock ticking.”

Parry hadn’t been in South Florida much until recently other than as the captain in the national tour of Titanic and as understudying Richard Burton and later Richard Harris in the revival tour of Camelot. But he began hearing about Dramaworks several months ago during a Titanic cast reunion from Rob Donohoe, who has appeared there in A Delicate Balance, Dividing The Estate, Exit The King and The Pitman Painters. Then he received a text from Claire Brownell who he had just finished playing opposite as Joe Keller in Gulfshore Playhouse’s All My Sons in Naples. Brownell, who was playing in Tryst and was in Exit The King, alerted him that Dramaworks was auditioning for Zorba.

Cholerton helmed similar concerts when he ran the Caldwell theatre company and has staged three last year for Dramaworks: Company, Camelot and Man of LaMancha. He will also lead one more this summer at Dramaworks, Frank Loesser’s The Most Happy Fella July 18-27. The production values for this show reportedly are even more lush than previous productions, which have relied on isolated pieces of costuming and primarily evocative projections to set the scene.

In theory, actors in staged concerts remain “on book” with the script and score on music stands. But Dramaworks concerts, although the books are still used, require an intense and short rehearsal period because director Cholerton invests them with a great deal of movement. Parry is quick to admit “I’m not too light of foot. I did win a jitterbug contest in the seventh grade, but I’ve been in a lot of shows where you had to move. But it is not second nature to me.”

So his homework has included watching You Tube videos of Greek dancing by professionals and ordinary people at celebrations – which led him to a key discovery.

He spotted one of a Greek festival in Ottawa where people strolled a street lined with cafes and a band was playing, “just like Clematis out there except wider.” Suddenly, one man stops by a band and asks them to play “Zorba,” the song in the film by Mikis Theodorakis.

“It’s a nice afternoon. And he begins dance. He looks about 40…and he’s just dancing. Not like a professional dancer; he’s a guy. And one by one by one, people are going, hey, …and they are putting down their martinis and they’re putting down their beers, and you see a wife talking to her husband and they’re starting to dance, and by the end of it there are a couple of hundred people dancing. That was magic. And I thought that’s the spirit of this show.”

This entry was posted in Features and tagged Palm Beach Dramaworks, Zorba. Bookmark the permalink.