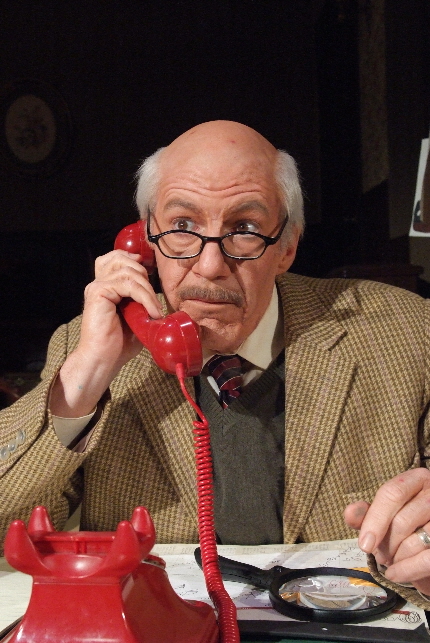 When writer and performer Tom Dugan arrived on stage out of makeup and costume to address the audience after his one-man show at the Broward Stage Door Theater, it was difficult to imagine that the 52-year-old boyish looking Irish Catholic had just spent two hours immersing the audience in the life story of notorious Nazi hunter Simon Wiesenthal.

Yes, that’s the beauty of Wiesenthal: more immersive theater experience than history lesson, Dugan has the audience eating out of his hand (at one point, literally as Wiesenthal offers grapes out of a plastic baggie to the front row while pondering the wonders of how the delicious morsels were created seedless).

Dugan’s story takes place on the last day of Wiesenthal’s career as the founder and head of the Jewish Documentation Center in Vienna — he tells the audience that he has been hunting Nazi criminals for 58 years. Today, the “audience” is a visiting class from America who has come to see his office, learn of his experiences, and hear him tell “things that will be beyond your imagination.”

He invites the class to enjoy coffee and doughnuts set up in the back (some folks in the audience actually turned around to see if the amenities were waiting. No, it’s just part of creating the illusion). And, he warns that some visitors before us have gotten burned by touching the space heater. “Don’t touch the space heater.”

These cozy touches create a delightful ambience for the play. It helps that Dugan has an obvious love for his character, capturing his humor, but also his tenacity. The actor’s Austrian accent and work with a dialect coach solidifies the authenticity.

“I have been called the Jewish James Bond,” he says, dressed in a casual suit with V-neck sweater and tie a la your favorite professor. “However, martinis give me a headache and rather than an Austin Martin, I drive a Peugeot. Instead of guns, lasers and rockets, my weapons are persistence, publicity and the most dreaded thing known to mankind — paperwork. ”

A Holocaust survivor, Wiesenthal lost 89 family members and spent six decades fighting anti-Semitism and prejudice, not just against Jews, but, as he says, against all people.

“If we do not honestly try to understand how this happened then, it will happen now,” he warns.

Wiesenthal as a play is a hard sell, no doubt: a one-character performance, a subject matter that some might think would be too narrow to involve them, lots of historical references. While all this is certainly true, the playwright and his director, Jenny Sullivan, avoid these trappings. Dugan’s script is ripe with vignettes as scenes from the Warsaw Ghetto and an Israeli courtroom are brought to life. Sullivan’s blocking uses different stage areas for the “other” characters as Dugan breaks out of his Wiesenthal mold to play a defiant German officer, an old friend, and a cigarette smoking German teen punk who questions the real existence of Anne Frank.

And, yes, through this all, the history lesson is there: his theory on why Hitler wanted to exterminate Jews — “he may have caught syphilis from a Jewish prostitute.” A former architect before he was sent to the Ostbahn camp, Wiesenthal married Cyla Mueller in 1938 (he receives a friendly call from his wife during the play to remind him to bring home milk). One of the play’s most poignant vignettes is when the young Wiesenthal pleads with his wife to separate from him as he’s brokered a deal with the Polish underground to have his wife sent to Warsaw under an assumed name to escape the death camp.

The play moves along swiftly —  its constant underscore is the ongoing quest of the Nazi hunter’s pursuits. On his last day, he wants to get one more criminal lassoed in before the clock strikes at 5 p.m., which will signal his retirement. On this day, Wiesenthal may have located Alois Brunner, who was living under the alias Georg Fischer, at a hotel. The route in which Dugan as the playwright shows the painstakingly skillful ways in which Wiesenthal gathers information is intriguing and wonderfully insightful.

Brunner was an important “get” for Wiesenthal in real life. In 2011, the Simon Wiesenthal Center released a list of its Most Wanted Nazi War Criminals with Brunner being at the top of the list of most important unpunished Nazi war criminals.

Dugan came up with his idea for the play after talking to his father, Frank, about his experiences in World War II. “Of all his stories about his time in Europe, the one that impressed me the most as a kid was when his unit liberated the Langenstein concentration camp in Germany.” The young boy said to his father, “Boy, Dad, you must really hate Germans,” Dugan recounts in program notes. “His answered surprised me: ‘Nope, there are all types of people, good and bad. I don’t judge them by what group they belong to. I judge them by how they behave.’ ”

Wiesenthal is captivating in so many ways, in large part because of the showmanship of Dugan, but equally because of the rich subject that created the foundation for his play. If you go, stick around for Dugan’s question and answer session, it brings the whole portrait of Wiesenthal full circle.

This entry was posted in General and tagged Broward Stage Door Theatre, Wiesenthal. Bookmark the permalink.