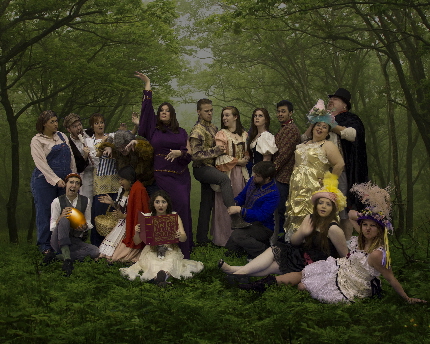 Into The Woods already in the woods at Entr’acte Theatrix / Photo Carlo-Rubino Sabusap.

At Entr’acte Theatrix’s production of Into The Woods, the special pleasure was watching nascent talent taking unsteady but ever more sure steps in their evolution en route to fully-blossomed professionalism.

But a full-fledged review of the work running at the Crest Theatre at the Delray Center for the Arts wouldn’t be quite fair. Entr’acte is specifically designed as a hothouse for budding but talented thespians, most in or just out of college, and no one connected to the company expects the highly-polished experience found at, say, the Maltz Jupiter Theatre.

“Yes, it’s uneven,” founder and executive producer Vicki Halmos, said without the topic being raised, but grinning with pride after opening night. “This all has to do with talent and work ethic. It’s a launching pad.”

But the truth is that the current production of the Stephen Sondheim-James Lapine classic musical is, to be paternalistic, surprisingly good — notable for energy, commitment, imagination and promising skills at mastering a notoriously difficult score.

It has a cast of 18, forged from experienced pros like Sharyn Peoples as the Witch alongside college students like Sahid Pabon as Cinderella’s Prince. The other assets included a solid six-piece band and a beyond-the-call-of-duty devotion by off-stage talents to sets, lights, sound, props and uncredited but outstanding costume design.

It’s a high-water mark among the 12 large-scale musicals the company has produced since 2012, all embodying the troupe’s name. Entr’acte is the traditional theater term for the musical prelude to the second act – a transition that perfectly mirrors the organization’s purpose.

Some of its alumni have gone on simply to be appreciative and informed audience members; others have carved out careers in the profession, including Ruthie Ann Miles who won the Best Featured Actress in a Musical Tony Award this month for her Lady Thiang in The King and I.

Entr’acte and its previous incarnation for 10 years as the Principal Players have trained an upcoming generation of theater practitioners by pairing them alongside working professionals (ringers, Halmos calls them). It gives many of them parts that they might not get a shot at in other companies. Significantly, it expects them to learn to be professionals and pays everyone “competitive non-Equity” wages plus funds to offset some of the cost of gasoline.

Into The Woods, with its famously intricate music and lyrics, required about seven weeks of rehearsal – mostly at night since most of the cast has other jobs. The sitzprobe – the first time the cast and full band play together – lasted 8 ½ hours.

The production featured a kind of wooden jungle gym spread across the stage bathed frequently in projections, including the ingenious idea of having a large round screen high in one corner double as the full moon that figures in the story, a clock striking midnight and an oversized video depicting the huge mascara-adorned left eye of the giantess in the second act.

Kevin Black, an experienced director-choreographer, matched the staging to the abilities of his cast, but he had them visible much of the evening as a sort of Greek chorus/community executing precision movements rather than let them just stand around.

He inserted touches such as having the harp that Jack steals in the second act become a statuesque beauty in gold lame who clings to him; Halmos said this represented Jack’s sexual awakening. The cow Milky White, in a bit of drollery, is just a cobbled-together almost two-dimensional prop carried around by a suitcase handle by three different actors.

Black also bookended the play by having the narrator be a young girl reading the story out of a book of fairy tales. That book that had to be passed on to the cast when the narrator leaves the stage halfway through the second act, metaphorically putting the responsibility for the story in the protagonists’ hands.

Into The Woods runs through June 28 from Entr’acte Theatrix performing at the Crest Theatre at the Delray Beach Center for the Arts, 51 N. Swinton Performances 8 p.m. Thursday-Saturday, 2 p.m. Saturday-Sunday.
Runs about 2 hour 40 minutes with one intermission. Tickets $25. Student rush half-hour before curtain $10 with ID. Call (561) 243-7922, Ext. 1