Chicago Audiences On Their Feet For Estefans’ On Your Feet 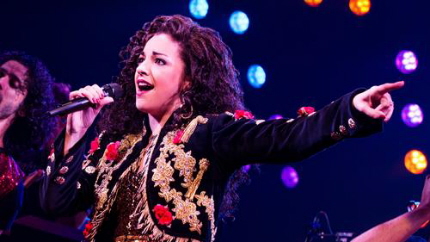 Ana Villafañe as Gloria Estefan in the Chicago world premiere of On Your Feet! / Photo by Matthew Murphy via Playbill.com

The initial reviews are promisingly positive for Wednesday’s world premiere in Chicago of the new Broadway-bound musical On Your Feet! which retells the life story of Gloria and Emilio Estefan, who popularized Cuban-American pop music around the world from a base in Miami.

Those reviews seem to indicate an energetic, rousing evening that smartly relies heavily on the Estefan songbook but has woven in a solid script was well. All the critics felt that work still needed to be done, but all expected it to succeed in Manhattan where Jersey Boys and Beautiful have thrived.

Links to those reviews are:

A slideshow of photos from the opening night is at: http://www.playbill.com/news/article/see-the-very-first-pics-from-broadway-bound-gloria-estefan-musical-on-your-feet-351495

The musical in development three years has been in previews at the Oriental Theatre since June 2 and will continue playing in Chicago through July 5. Then, it goes back into the garage for the inevitable alterations before a scheduled bow at Broadway’s Marquis Theatre for previews Oct. 5 and a formal opening night a month later on Nov. 5.

It stars Miami-raised singer-dancer-actress Ana Villafañe as Gloria and Josh Segarra as Emilio. Reportedly, the Estefans have been deeply involved with most facets of the production throughout its evolution including helping to write the orchestrations.

The current production has several other artists with Miami connections. Emmanuel “Manny” Schvartzman, the frequent music director at Slow Burn Theatre Company shows is serving as an assistant music director and who started at the reading a year ago doing the music/vocal arrangements. Andy Senor Jr., artistic director of District Stage Company in Miami, is the associate director of the show.

Actor Henry Gainza, often seen at Actors Playhouse in Coral Gables in such shows as In The Heights and Joseph and the Amazing Technicolor Dreamcoat, is in the ensemble; so is Natalie Caruncho, a New York-based actress/dancer from Miami who produced Into The Woods at the Arsht Center this season. The cast also includes University of Miami grad Andréa Burns as Gloria’s mother – a linchpin in the plot — and Omar Lopez-Cepero. The book was written by former Barry University student and Academy Award winner Alexander Dinelaris Jr. (Birdman)

The plot obviously centers on many events that occurred in Miami locales that should be familiar to South Floridians.

Vivacity Media Group, the show’s publicist, refused to grant interviews and access to news media outside of Chicago, other than a New York City news conference last spring. So here is a sampling of the preview articles generated by the Chicago media: