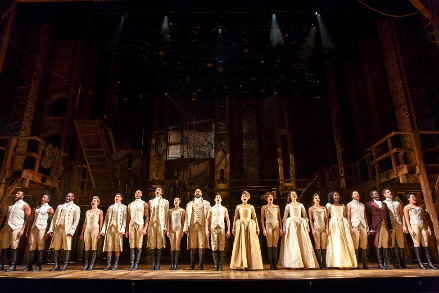 Hamilton and Dear Evan Hansen – two of the most critically acclaimed and fantastically popular musicals of the past decade – headline the 2018-2019 Broadway Across America season slated for the Broward Center for the Performing Arts.

The promise of Hamilton had been “teased” last year, to use BAA’s term, but no dates or prices were announced and Hansen was a bit of surprise when the titles were unveiled this week.

But the catch, which BAA had made clear from the beginning, is that first call on the tickets will be to renewing season-long patrons from 2017-2018, then to new season subscribers. Those subscriptions are currently on sale. The company has put on extra operators for Saturday.

Individual tickets will go on sale spread over time, but the schedule and prices were not made available this week. The Hamilton company plans to hold a low-price lottery on the day of each performance, much as is done in New York.

In New York City, Hamilton has commanded astronomically high ticket prices, so it’s no surprise that BAA is hiking their season prices from 24 to 26 percent for the coming season. The range for advance subscription prices for the current season were $209 to $791. For the Hamilton season, the subscription price will be $261 to $1002.

But for those worried that subscribers will take up most if not all of the available seats, BAA has an answer, said Susie Kasjka, executive vice president of presenting. Normally shows run two weeks at the Broward Center with a goodly number of seats available for individual purchase even for popular shows. On rare occasions, a run might be three weeks and even four. Hamilton which is anticipated to increase season subscriptions will run five weeks, December 18, 2018 to January 20, 2019.

The balance of the season includes the stage version of Anastasia, Broadway revivals of Fiddler on the Roof and The King and I, plus A Bronx Tale, a musical based on Chazz Palminteri’s one-man show and later film. All but the two revivals are currently playing on Broadway. A seventh extra show that can be purchased is the retooled Phantom of the Opera that played the Broward Center in 2014 and the Arsht Center in 2016.

For those living in a remote area of Kalahari Desert, Hamilton is a multi-cultural retelling of the life of Alexander Hamilton in which a primarily non-white cast performs a sung-through score featuring rap, hip-hop, pop, soul and classic Broadway musical styles. Written by Lin Manuel Miranda of In The Heights fame, the show earned a record-setting 16 Tony nominations, winning 11, including Best Musical, and was also the recipient of the 2016 Grammy Award for Best Musical Theater Album and the 2016 Pulitzer Prize for Drama. A prior off-Broadway production of Hamilton won the 2015 Drama Desk Award for Outstanding Musical as well as seven other Drama Desk Awards out of 14 total nominated categories.

In addition to a sit-down company in Chicago and London, one national tour began in 2016 and a second was sent out last year.

Dear Evan Hansen, with emotionally stirring music and lyrics by Benj Pasek and Justin Paul, and a book by Steven Levenson, has evolved – much like Hamilton – through a series of workshops and prior productions before bowing on Broadway in 2016.

Hansen is a high school senior afflicted by social anxiety disorder which keeps him from connecting with other people.  When a classmate dies, he invents a relationship with the dead boy which creates a bond with both the boy’s family as well as his peers. The musical won acclaim for Ben Platt‘s titular performance as a well as music and lyrics that many people related to as outsiders themselves or as someone with a mental disorder. Last spring, the show was nominated for nine awards, winning six, including Best Musical, Best Score, Best Actor in a Musical, and Best Feastured Actress for Miamian Rachel Bay Jones as Evan’s mother.

Both shows have been credited with a resurgence of interest in Broadway among teenagers, Gen-Xers and Millenials.

The schedule announced Friday was:

Rodgers & Hammerstein’s The King And I — November 20 – December 2, 2018 (To read a review of this production which played the Arsht last year, click here )

Anastasia — April 23 –May 5, 2019 – A highly expanded musical based on the Disney animated feature but designed to appeal to adults as well. (Read our review of the current Broadway production by clicking here. )

Subscribers wanting to renew or new subscribers should call 800-764-0700 or go to BroadwayInFortLauderdale.com.  Normal hours for the phone number are Monday through Friday, from 9 a.m. to 5 p.m., but there will be special hours this Saturday, Jan. 27 from 10 a.m. to 2 p.m.