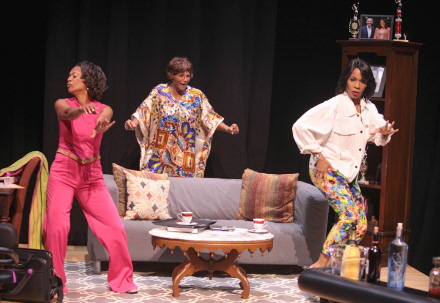 Meet the Ladies of Sassy Mamas, some of Washington, D.C.’s finest women who are going through a mid-life crisis of sorts. They’ve turned the tables on older men, a given that all is right with the world if they have a young woman on their arms. The three friends are at different stages of their lives, yes, but they couldn’t be more than ready to meet in the middle. It’s time for them to venture out and get some eye candy of their own.

M Ensemble opens its season, the second in its permanent location at The Sandrell Rivers Black Box Theater at the Audrey M. Edmonson Transit Village, with Sassy Mamas. And things couldn’t be cozier. Celese Bedford Walker’s  wonderfully female play embraces, not only womanhood, but personhood, on so many levels.

As always, M Ensemble has cast the roles with pure perfection, which is so integral to make this show fire, spark, and rev up on all cylinders. Think Sex and the City morphed with last year’s insanely funny film Girls Trip, and you’ve got Sassy.

Dozier’s devil-may-care Jo Billie is feisty, willing to show a lot of leg, and then some. She’s as sleek as a lynx. Dozier, an accomplished jazz singer, purrs her way through many of the lines, making Jo Billie an Alpha Cougar. But as Walker’s script calls for JB’s calculating ways to crumble, i.e. when the player gets played at her own game, well, that’s when the Ice Queen melts.

Said player is the absolutely captivating Diamos Demerritt as LaDonte, who has strict orders as the pay-for-playmate. When Jo Billie says “zip it,” he doesn’t speak; when she says “unzip it,” well . . .Demerritt is the perfect match to cavort, cajole, and keep up on every level with Dozier’s sly fox Jo Billie.

Best friend Wilhemina Calloway Sorenson (Catherine Williams) has devoted her life to her career as National Security Adviser to the president (yes, if you’re thinking the character could have a small dose of inspiration a la Condoleeza Rice, you’re correct). The setting is 2013-2014, so her president is Barack Obama. There’s a picture on the mantle of her apartment to prove it. She’s been so busy smoothing over international relations, she’s hardly had time to have a relationship of her own. Her escorts are the older gentlemen of Capitol Hill, ambassadors and the like, but no one who has been able to take her attention away from her Blackberry, or made her feel like she needed to escape the grips of her ever present Secret Service posse.

Because of her position, she knows how close the world is to “sudden destruction” (this line got more of a chuckle than it may have had in pre-Trumpian days), and, she humbly admits that this is what has made her aware of what, and especially who, she has missed out on life. There’s a life-at-the-crossroads presentation that Williams subtly delivers – and that’s what makes her character so relatable.

There are sure to be many in the audience that will understand the Wilhemina’s tug-of-war. “Discipline and control is the guiding light of my life,” she says, and you better believe it. But when she frees herself to ditch her bodyguards and take off on a motorcycle ride with her new young man, Wes Washington (Scott Wesley), there’s a collective “you go, girl” vibe that seeps through the audience.

Wesley as Washington starts wonderfully smug as the NFL player turned journalist who is all business when it comes to his interview with one of Washington’s power women. It’s the perfect cover for him to shed when the character professes his true love. You feel it, and you know it’s true.

Finally, there’s the demure Mary Wooten (Carolyn Johnson), happily married for years. She shares her story with the audience, breaking the fourth wall: “My husband, Jerome, is retired, and just when I though we were working together on our relationship, he kicks me to the curb for a younger woman. If I could catch a new man, I would. But all this talk about catching a boy toy is ridiculous. I can’t even catch a cold.”

While on the surface, Mary may seem like the most docile of the group, Johnson (one of the favorite mainstays at M Ensemble) brings so much of the actress’s uncanny ability to add dimension upon dimension to a character, Mary’s moments are many. When she’s uprooted from her bed in the middle of the night, and shows up at friend Jo Billie’s only in a sheet with a bottle of whiskey, Johnson blows the lid off of her buttoned-up Mary. And how. Mary’s “boy toy” – the innocent gardener Colby is played with a seductive innocence, and sheer charm by André Morissette.

Mitchell Ost’s set of three distinctive rooms for each of the ladies serves to differentiate the characters, since each reflects the given inhabitants’ personality. Jo Billie stretches out on a seductive loveseat in her glamorous apartment; Wilhemina has a couch, writing desk, and a bar, which the women happily help themselves to champagne from, and Mary spends her time in the backyard garden, which she’s populating with African plants from her travels abroad.

There were still a few kinks to work out having seen this show at the beginning of its run. As the ensemble gets tighter, the timing will get smoother.  And, hopefully, some of the long blackouts between scenes due to quick costume changes, and some minor technical glitches – sound cues that seemed off – will be worked out.

A stepped up pace might help the action move a bit quicker, too. There is much sass still to be mined from this group, and, with a few more shows under their belt, and a bigger audience to play off of, they will hopefully find more moments from Walker’s script.

This isn’t August Wilson, folks, and it isn’t meant to be. Director Jerry Maple Jr. gives us sheer, uncomplicated fun from a lightweight script, and a production meant to let you laugh off anything that’s going on in an all-too-serious world.
And when the ladies get down to Rick James Super Freak, you know that if you haven’t already, it’s time to let your hair down.