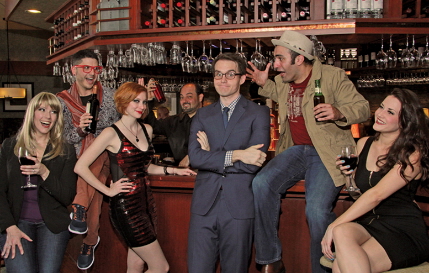 For years, we’ve been talking about The Theater of Recognition whose mass success ratchets up a level by resonating with the specific issues and culture of a sub-set of the mass audience: Jews (Fiddler on the Roof) African Americans (A Raisin in the Sun) Latinos (In The Heights) Arty Gen-Xers (Rent) Green-Skinned Outsiders (Wicked.)

So, the utterly charming new show at Actors’ Playhouse is a musical for, by and about the 21st Century Urban Neurotic Young Adult in that eternal crucible of awkward human relations: the First Date.

Of course, you don’t have to be a member of the advertising machinery’s most favored demographic to respond to this hilarious and touching field trip into the sociological jungle of a modern blind date – almost everyone since Adam and Eve has been there. The sweaty palms. The halting sentence structure. The predilection for saying precisely the wrong thing at the wrong time.

But this cultish hit from Broadway last year is insightful about the mating dance of this moment, right down to Googling your prospective date and arranging for a friend to call you on your cell to give you an excuse to bail. That elusive target of “younger audiences” will feel like they are watching a very funny documentary set to music as they plug into a blind date between nervous first-timer Aaron (Clay Cartland) and self-described serial dater Casey (Erica Lustig).

And yet Austin Winsberg’s perceptive book and the nimble score by Alan Zachary and Michael Weiner is simultaneously awash in all those tropes that make it all too recognizable to the entire audience. First Date doesn’t break a single clod of new ground, but it excavates deeply and with such wit and compassion that the result is a thoroughly entertaining evening.

This top-notch cast and director David Arisco are so perfectly in that groove: embracing the naturalistic angst as well as the intentionally over-the-top musical comedy production numbers. To wit, when Casey says off-handedly that she’s not Jewish, Aaron’s overactive imagination shifts in overdrive into a daffy procession of characters singing “(Not) The Girl For You” from his kvetching dead grandmother to the religiously-conflicted slacker son that he imagines they might produce if they married.

First Date has a straight-forward arc that seemingly could barely sustain a half-hour sit-com episode: tracking a blind date between a straight arrow fella and a guarded edgy woman. It’s a hook up doomed from the start and, of course, ends in bliss 95 intermissionless minutes later as superficial layers are stripped away and we see them as the similarly lonely, yearning souls. It’s a classic example of porcupines dancing in the dark, hopefully trying to reach out without getting hurt.

But the journey is ingeniously broken up with flashbacks, mental arguments with friends and relatives, a singing waiter and especially Casey’s fabulously flamboyant gay friend frustrated that she’s not answering his rescue phone calls. (You can download his song “Bailout” for your ringtone from the show’s website.)

The book and score luxuriate in Casey and the waiter’s long experience in this arena. When she spots Aaron putting drops in his eyes even before they’ve met, she classifies this one knowingly to the waiter as “allergy guy.” She condescendingly but gently guides Aaron in the opening rounds of the date by citing “the rules” such as not mentioning religion in the opening minutes. Being faithful to the times, these characters are almost blithe in their use of profanity and frank sexual references. This is not a show for pre-teens.

What this cast is so good at while being supremely silly at times is injecting a feeling of watching real people into what could easily have been caricatured archetypes in other hands.

Every member of the cast under Arisco’s leadership delivers superior work. Start with Clay Cartland who is Carbonell-nominated as the human-turning-into-a-slug in The Trouble With Doug. He just gets better with every show in every department. Few actors are as comfortable playing being uncomfortable in their own skin. He doesn’t play a klutz, he plays someone just like you and me who frequently trips over himself at the most inopportune time, swallowing a half-uttered wrong thing to say just a half-second too late. For all the borderline doofus behavior, his Aaron is a decent, feeling everyman we all root for. He snaps hearts open with a song about his distant mother, “The Things I Never Said,” a duet with Laura Hodos.  Then he can be hilarious in his unhinged rant against an ex-fiancée in “In Love With You.” Another award nomination in some competition is almost certain.

Erica Lustig is a Miamian, who has worked out of town except for Little Shop of Horrors at Broward Stage Door. She has a wonderfully wry side delivery of the arch knowing lines as someone burned way too often but who keeps putting herself out there with absolutely zero hope of actually connecting. Despite the razor-embedded walls she has erected — even pushes them against anyone trying to come close – the lovely Ms. Lustig vibrates with intelligence, wit and a kernel of longing. After she recalls a past in which she cavorts with two “bad boys,” she gives a dead perfect delivery of longing and regret in the laugh line, “You have no idea how much I miss the smell of cigarettes and apathy.” And her belter’s mezzo on rock ballads like “Safer” are a highlight of the show.

Usually, critics rave about the ensemble when they do quick changes into an array of distinctly different characters or they blend so well together or whatever. All of that is true here, but it’s completely inadequate because Arisco has hired some of the best actor/singers in the region and the writers have given each of them outstanding chances to shine on their own, chances that these actors make the most of.

Laura Hodos, who must spend as much time here as at her Orlando base, is hilarious as Aaron’s passed on grandmother, deeply touching as his emotionally distant mother and as Casey’s middle-class settled sibling giving sisterly advice.

Nick Duckart, who blew audiences away on this stage as Usnavi in In The Heights, is Aaron’s blunt crass best friend equally full of advice, as well as one of Casey’s less wise romantic entanglements.

New-to-Florida Jessica Booth is fine as various characters, but especially as Aaron’s ex-fiancée remembered alternately as a dream girl and as a controlling self-centered… well, you get it.

Roland Rusinek, a veteran just now getting work down here, inhabits the waiter who has seen a thousand of these dates and knows when to give advice. But he earns his show-stopping solo when the waiter lets his real love of performing come out in a Vegas showroom number, “I’d Order Love.”

We’ve left the best for last. Conor Walton has been giving vibrant unique performances for years now in small up-and-coming troupes such as Slow Burn Burn Theatre Company (The Narrator in Into The Woods) and Outré Theatre Company (Richard Loeb in Thrill Me). With that devilish grin, shining eyes and a dancer’s body language, he exudes a magnetism and an intensity that draws focus without the need of a spotlight. Here he is unleashed as Casey’s hilarious gay friend, and as a debauched former flame for Casey complete with tattoo sleeves, and as that messed-up son that Aaron imagines. Almost all of these characters have grunge rock or hip-hop numbers with the kind of patter lyrics that Gilbert and Sullivan would be writing if they were alive today. Walton nails each one.

Arisco’s talent as a director/musical stager is well-known, but most of the time, each work earns praise anew. To most patrons, his work is invisible, but theater pros can see how well he moves his cast around the stage like a chess grandmaster, how he helps the cast wrench out emotion when they are standing still and sending a song to the back of the house, his endlessly inventive imagination for adorning a bare script with scores upon scores of tiny bits of business that make a show seem more like life even when the goings are patently unrealistic, his bottomless bag of comedy tricks.

And while he often casts leads as well as secondary parts with locals who he’s developed a relationship with, and while he brings in ringers from New York as well (often with a Florida connection like Lustig), he also grows his unofficial repertory company with outstanding locals who have proven themselves in other companies like Walton.

The set by the veteran Tim Bennett is a massive urbanscape that revolves to reveal a large pale generic trendy bar/restaurant. There’s nothing wrong with it, but it does seems a bit overblown for what could be an intimate chamber musical about relationships. But it gives Arisco a large multi-level playground for his characters to prance around. A nod, too, to lighting designer Eric Nelson who makes the most of a new digital lighting board and creates a variety of environments as the daters snap in and out of memories.

The entire evening is powered in every sense of the word by musical director Manny Schvartzman and his band: Andrea Gilbert on keyboards and reeds, Sandy Polarack on guitars, Rupert Ziawinski on bass and Jay de la Rosa in drums.

The best news here is that 95 percent of the sound problems that crippled Actors’ Playhouse’s transcendent production of Ragtime this winter have been temporarily solved with the rental of a digital sound board that Actors’ hopes to buy before the next season starts.

Actors’ Playhouse is having the kind of season that makes critics wonder if they are going soft: Other than the so-so Miracle on South Division Street, every other show this season has been an over-the-fence home run. Add this one to the list.