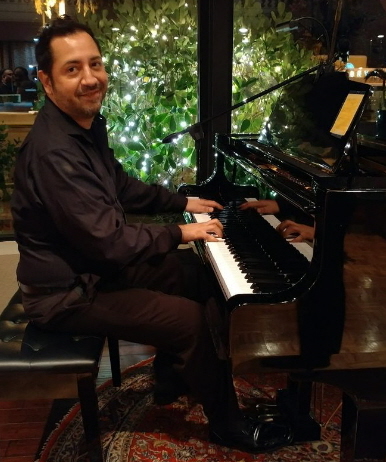 Paul Reekie playing at the Carbonell Awards Ice Cream Social in 2019 at The Wick.

Paul Reekie, a musical director and arranger for a wealth of South Florida theater productions, cabaret performances and the supportive accompanist at countless auditions, died unexpectedly Friday at his home in Boca Raton.

Reekie, 48, appeared to have been working outside his home and the cause of death was still being determined as of Saturday afternoon. Friends hope to hold an online memorial in the future.

The pianist forged the sound of musicals for many theaters in the region for 15 years, earning award nominations. But he also won the overwhelming affection and respect of performers who flooded his Facebook page with dozens upon dozens of tributes — not just to his musical skill but to his friendship and support.

His schedule included musical direction and hands-on shaping of concerts and cabaret gigs with close friends like Shelley Keelor and Bruce Linser, who also drafted Reekie when he directed full musicals. 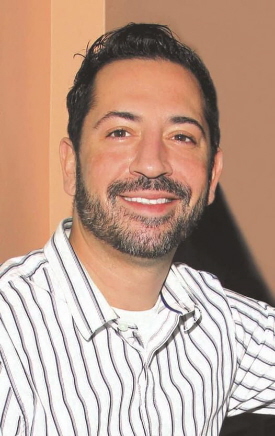 His theater resume reflected a constant demand, including A Chorus Line, Sister Act, Swing! (The Wick Theatre); To Life and To Life 2 (Willow Theatre); The Music of Andrew Lloyd Webber (Lynn University); La Cage aux Folles, A Chorus Line (Broward Stage Door); Thoroughly Modern Millie, Dreamgirls, Fiddler on the Roof, Footloose, Jekyll & Hyde (Marquee Theater Company); A Funny Thing Happened On The Way to the Forum, Man of La Mancha, Grease, Avenue Q, Little Shop of Horrors, La Cage aux Folles, Company, Spamalot, The World Goes ’Round,  Hair, Side by Side by Sondheim, A Chorus Line (MNM Theatre); Company, Berlin to Broadway (Palm Beach Dramaworks); The Trouble With Doug, and The Longing and the Short of It (Arts Garage).

He was notable for arranging pieces for cabaret acts and for “reducing” scores for large orchestras into a handful of instruments. The latter talent was lauded as amazingly deft at maintaining the complex sound and structures of the original score for a small combo, but keeping the aural flavor of the original.

He was nominated for the Carbonell Award for musical direction in 2013 for his work on The Long and the Short of it, and in 2014 for The Trouble With Doug, both original works. He won the Silver Palm Award for his work on Hair and The World Goes ‘Round.

While he was exacting in his work, he easily switched gears when a director wanted something different. Auditioners praised his ability to switch keys when a performer didn’t have the right sheet music, or could adapt when the performer forgot to bring any sheet music at all.

“He played the piano like a whole orchestra. I don’t know how he played so many notes to make it sound so full, but I felt supported as a singer when he played for me,” Linser said.

He was born April 20, 1972 in Argentina to an Argentinian mother and American father from Michigan. The family lived in London before returning to Michigan where he grew up.

His interest in music came early and he reportedly composed a musical when he was 9 years old. He acted in musicals in high school at The Roeper School in Birmingham, Michigan, where he played Mozart in Amadeus and Seymour in Little Shop Of Horrors, said his “Audrey” of the time, Jen Cass.  As a junior in 1987, he was invited to play for Pope John Paul II during his visit to the Pontiac Silverdome.

But when he graduated in 1989, he studied and received his degree in computer programming from Michigan State University. When his parents moved to Florida, he followed to be near them and worked as a computer consultant specialist for Electronic Data Systems (EDS), which was acquired by Hewlett Packard. For the most part, he just played piano for himself, Linser said.

That changed in 2004, when Linser, a new arrival in the region, spotted Reekie accompanying the Gay Men’s Chorus in a concert. Linser, as a cabaret performer, was looking for an accompanist and was impressed with Reekie’s skill.

“He always blamed me or credited me for getting him into this world,” Linser said.

In 2005, one of his first musical director gigs was for Palm Beach Dramaworks’ Berlin to Broadway with Kurt Weill where he met Keelor in auditions.

“We just hit it off. We understood each other on stage,” Keelor said. In van rides for concerts and tours, “we (became) each other’s sounding board. We helped each other on big decisions. It’s a huge loss.”

His wry wit was often on display, such as at the 2018 Carbonell Awards when he joined three other musical directors Caryl Fantel, David Nagy and Michael Ursua paying tribute to colleagues who had died. They simultaneously played a single piano, picking out a medley of songs that the lost talents had loved — with Reekie continuing to finger the keyboard while under the instrument.

Actor Michael Scott Ross wrote, “Paul was one of the first people I met in a tightly-knit community of performing artists. I had the privilege of working with him in countless projects. For me, he was a staple of South Florida Theatre. When we met during MNM’s Hair, it was evident right away that we would become close friends.”

Ross continued, “His sense of humor was like no other. Talking on the phone laughing about something that happened three years ago seemed to be a common theme in our conversations.  We always kept each other informed on how life was going, especially in these challenging times. When I hear his name, the first thing that comes to mind is him saying ‘I don’t even know what that means.’  If you know Paul, you know what that means.  His laughter, direct honesty, unforgettable talent and above all, friendship will be greatly missed.”

Linser echoed that: “Artistically, he wouldn’t compromise. It had to be right. But for someone as meticulous as he was, he had that free spirit that was ‘Someone is having a party. Let’s go to the party.’”

Linser, citing an often mischievous twinkle in Reekie’s eyes, remembers getting a phone call saying he couldn’t play a cabaret show because Reekie had broken his thumb roller skating in his kitchen,

Reekie’s reputation was as a perfectionist who gave his entire attention to his work. The overwhelming emphasis he put on his jobs had begun to make him think whether he needed to step away and spend more time on a personal life “taking care of himself,” Keelor said. “But he couldn’t walk away because he chose to take care of the shows and his friends because they were family.”

Reekie also was interested in mentoring a new generation of artists. He served as music director of summer productions at Florida Atlantic University for seven years including productions of Once Upon a Mattress, She Loves Me and Bonnie & Clyde. He  created, produced and fronted money for a production of Sweeney Todd at FAU in 2012.

“In addition to supporting his friends, Paul was very philanthropic,” said Michelle R Jaminet. “While he typically gave quietly, he also donated his time and talent for years to the American Cancer Society, most recently in 2019 when he produced, arranged, directed and performed at the annual ACS Palm Beach Gala at The Breakers.”

He also served as vocal director for Celebrity Cruises for three years.

Reekie’s last assignment was on Dramaworks’ The Light in the Piazza, which was short-circuited by the COVID-19 virus.

As a sideline, he applied his computer skills to design theater programs for MNM and web pages for Dramaworks.

He also loved dabbling in the stock market and caring for his dogs Ellie and Buster. “He loved them, but he bitched and moaned in rehearsal that he had to get home to let out the dogs, or he couldn’t go out afterwards because he had to get to the dogs,” Linser said.

He has no surviving immediate family, although friends thought he might have relatives in South America.

“His family was the theater community,” Keelor said.

This entry was posted in News and tagged Paul Reekie. Bookmark the permalink.