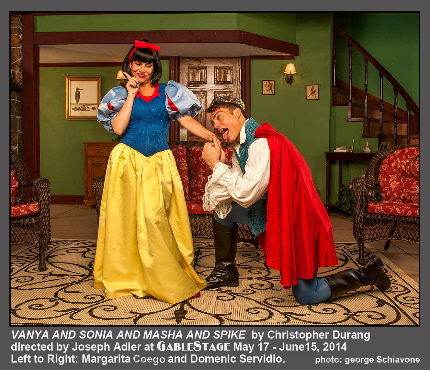 You have to see this to understand it, but it’s not children’s theater by a long shot: Vanya and Sonia and Masha and Spike opens at GableStage this month / Photo by George Schiavone

The snowbirds have gone home, but South Florida theater never seems to go dark these days. This year-round trend has never been clearer than right now with a calendar is jammed with an overwhelming cornucopia of options over the next two or three weeks.

At least six shows are opening this Friday and Saturday, and at least nine the following weekend, plus others the week after that, plus some social events, plus shows that opened earlier this month including two we haven’t mentioned before.

May 14-18: All in the Timing: New World School of the Arts in Miami hosts it final theater showcase, a collection of a half-dozen humorous one-act plays written by David Ives performed by the NWSA High School juniors and seniors.

May 14 – June 8:  Scott and Hem in the Garden of Allah: Actors’ Playhouse at the Miracle Theatre in Coral Gables. The newest play (only done twice so far) by Mark St. Germain (author of Freud’s Last Session) creates a fictional but not unlikely meeting between real-life friends and rivals F. Scott Fitzgerald and Ernest Hemingway. They wrestle with the sparks of art and the perils of creativity— and the personal destruction they can reap. Fueled by friendship and rivalry, two literary heavyweights reunite in 1937 for a final night at the Los Angeles resort villa, the Garden of Allah. A humorous and heated exchange ensues in this drama about the cost of love, friendship and the personal and professional price of being a writer.   www.actorsplayhouse.org

May 15-June 1: Hot Dog:  Thinking Cap Theatre at Black Box Theatre performing at Don Taft University Center at Nova Southeastern University in Davie. Remember all those adages about dogs? In Sarah Kosar’s biting dark comedy, meet Dog. She’s feisty, stubborn, and rather blue. She lives next door to her daughter, Maryanne, and her son-in-law, Michael, who desperately wants a new pet. After years of caring for Dog, Maryanne is tired as a, yep, you guessed it, so she calls on her sister Carol to throw her a bone and return home to help out. What ensues is a funny, disturbing, and thought provoking exploration of what it means to give and receive care. Starring Sally Bondi as the title character. http://thinkingcaptheatre.com/

May 16 – June 15: Tryst: Palm Beach Dramaworks in West Palm Beach. In Karoline Leach’s psychological thriller, a coldly calculating, handsome con man woos and marries vulnerable women, then takes all their money and runs – until he meets his match. www.palmbeachdramaworks.org

May 16-17: The Pajama Game: Maltz Jupiter Theatre Conservatory. Students present the Tony Award-winning musical featuring a toe-tapping score by Richard Adler and Jerry Ross with such hits as “Hey, There.” jupitertheatre.org

May 17-June 15: Vanya and Sonia and Masha and Spike: GableStage in Coral Gables rarely stages comedies, but its predilection for wry social commentary is perfectly in line with this hilarious yet incisive satire from Christopher Durang’s famously offbeat vision. Vanya won the Tony Award last year. In a modern riff on Three Sisters and the entire Chekov canon, Durang posits a sextet of offbeat characters stirred together at a family gathering at the landed gentry’s farmhouse in Bucks County, Pennsylvania. Among many notable moments is the family dressed up as Disney’s Snow White and some of the seven dwarves, plus a red hot diatribe from a Baby Boomer excoriating a Millennial for his ignorance of anything that came before the iPad. www.gablestage.org

May 22-June 8: The Great God Pan: Zoetic Stage in Miami. Amy Herzog’s play makes its regional premiere after its recent critically acclaimed world premiere at Playwrights Horizons theater in New York City. Jamie’s life in Brooklyn seems just fine: a beautiful girlfriend, a budding journalism career, and parents who live just far enough away. But when a possible childhood trauma comes to light, lives are thrown into a tailspin. Unsettling and deeply compassionate, The Great God Pan tells the intimate tale of what is lost and won when a hidden truth is revealed to the world. arshtcenter.org


May 22-June 22: The Pride: Island City Stage performing At Empire Stage in  Ft. Lauderdale presents Alexi Kaye Campbell’s play  examines changing attitudes to sexuality and the perennial themes of love, lust and betrayal in a plot that alternates between 1958 and 2008. Directed by Andy Rogow

May 23-June 8: Miss Julie: Naked Stage performing at Barry University in Miami Shores. This has been a long promised special project by this tiny company famed for its imaginative productions. Strindberg’s sultry tale of class and sexual politics will star Katherine Amadeo and William Matthew Chizever, and is directed by Margaret M. Ledford – the team responsible for Naked Stage’s acclaimed production of Turn of the Screw. Also featuring Deborah Sherman. www.nakedstage.org

May 22-June 29: Cougar the Musical: The Plaza Theatre in Manalapan. A trio of women – single, divorced, vulnerable and searching for their identity and self-esteem – are ripe to fall under the life-affirming spell of newfound love and hot younger men. This one features original melodies from six composers. Stars Margot Moreland, Katie Angell Thomas, Shelley Keelor and Clay Cartland as all the men. www.plazatheatre.net

May 23 – June 15: Gidion’s Knot: New Theatre in Miami.
During a planned – yet unexpected – and contentious parent-teacher conference, an emotionally fraught 5th grade teacher and a grieving mother discuss the tragic circumstances that led to the student’s/son’s suspension from school and later suicide. Gidion’s Knot is a heart-wrenching collision examining freedom of expression, the failure of the school system, bullying, and the emotional impact of feelings of personal culpability. A terrific script with some shocking discussions written by Johnna Adams. www.new-theatre.org

May 24-June 8: Doubt: Delray Beach Playhouse. Set in 1964 in the Bronx, Doubt recounts the conflict between Father Flynn and the very conservative principal of a Catholic school over his interest in a young b;ack student. delraybeachplayhouse.com

May 22-June 8: One Flew Over the Cuckoo’s Nest: Before it was a movie but after it was a novel, Dale Wasserman (better known for Man of LaMancha, write a theater version of Ken Kesey’s classic  tale of the individual versus conformity. Stars Todd Bruno as McMurphy and Lori Reyes as Nurse Ratched. Directed by Robert Nation. At Andrews Living Arts in Fort Lauderdale. www.classccreations.com

—-Broadway’s Second Bananas: Beth Dimon, one of the region’s finest actresses with one of the finest voices, gets the opportunity to deliver a  tribute to some of musical theatre’s funniest and beloved comedic characters, including Adelaide from Guys & Dolls, Ado Annie from Oklahoma!, and other second bananas from hits like A Chorus Line, Showboat and Pippin. This new space gives patrons restaurant style seating, a full-bar experience with a new Club Plaza Cabaret at The Plaza Theatre in Manalapan. www.theplazatheatre.net
.
—-Nevermore: The second and last weekend of this new musical about the life of Edgar Allen Poe runs at the new Evening Star Productions, an adult/student spinoff of the Sol Theatre, the children’s company in Boca Raton. Stars Carbonell-nominated Bruno Vida. www.eveningstarproductions.org/

—-Evita at the Arsht Center. A new revamped production of Evita starred Ricky Martin on Broadway last season. It’s unlikely Ricky will be living la vida ‘Vita on the road, but Evita remains one of Webber and Rice’s best scores with wickedly insightful jabs at political corruption in the guise of Argentina’s Evita Peron. Arshtcenter.org