Tryst Plumbs Complexities Of A Scoundrel And His Prey 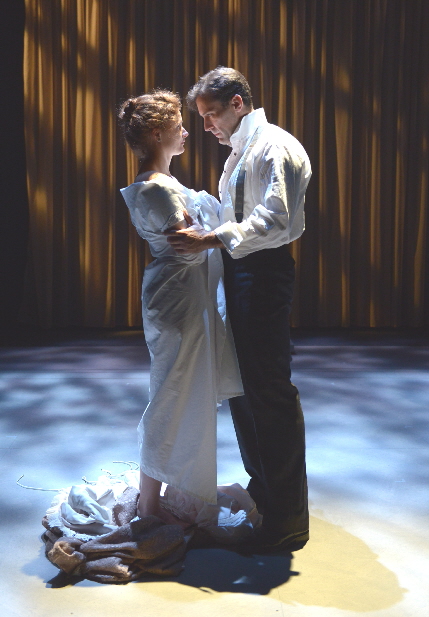 This is a very busy three weeks in South Florida theater (see our preview at http://tinyurl.com/lycqmd3). New reviews and stories will be added nearly every day, so if a specific show you’re looking for isn’t among the four on the front welcome page, click on the “reviews” button in white letters on the teal strip near the top of the page on the far left side of the welcome page, or look in the list of “reviews” in one of the red ribbons at the bottom of the page or use the search engine in the upper right hand corner of the front page.

The double helix is the elegant shape of two strands of DNA material, ever twisting in and around each other in patterns that signify life and, in turn, human beings, and, by extension, relationships, and, finally taken to a logical extreme, love.

That swirling spiral, with complex elements forming ladder rungs between the strands, echoes the emotional dance in The Tryst. It’s a psychologically-rooted tale of romance, albeit an unconventional definition of romance.

You may or may not predict the first major twist that shapes the rest of Karoline Leach’s 2006 play bowing at Palm Beach Dramaworks, or any of the others that follow. In truth, it matters not whether you suss out the twists ahead of time, although we will avoid spoiling much. It’s what causes those inevitable twists that forms the coiling core of this play.

The Byzantine workings of human relationships are solidly in director J. Barry Lewis’ wheelhouse. So it’s no surprise he has elicited a finely evolving performance from Claire Brownell as Adelaide, a meek London shopgirl. But he also has helped local veteran Jim Ballard score a personal best as George Love, a ne’er-do-well predator who targets the lady’s nest egg.

What often echoes a straightforward Edwardian melodrama is really a contemplation of human nature. The play originated with the true life story of a conscienceless rogue who in turn-of-the-century London made a career of targeting his considerable charms on unassuming young women with modest savings, marrying them and then vanishing after the wedding night with their assets in his pocket.

From that premise, Leach spins one such campaign and conquest far deeper into the labyrinth of the human heart and finds surprising facets in her fictional counterparts.

It’s difficult not to give away what occurs, but suffice it to say that charting the seduction of one victim would not make for a complete play, no matter how fascinating it is to watch the gigolo’s calculated exploitation of his victim’s low self-esteem by paying her previously unknown romantic attention. The rotter steals flowers from a cemetery for his courting and looks deep in Adelaide’s eyes to keep her from seeing how cheap her engagement ring is.

From there, Leach strips away layer after layer of both characters like the corsets and waistcoats falling to the floor on a honeymoon until both partners are at least metaphorically naked. Some of Leach’s psychological underpinnings are almost schematically neat, but it’s theater not naturalism and its neatness makes it lucid to most audiences, even inevitable.

Some observers may feel the performances and the play itself are a shade over-the-top, but you can argue that the whole thing should have a slight music hall feel to it. These two characters are aping behavior they have seen in stage dramas, much as young people today mimic behavior in TV potboilers.

Leach’s play does swerve in danger of becoming a little pokey at times, but Lewis is a master at pacing, so the lags don’t last long.

Ballard, as reliable as a Swiss watch, has not done such superior work since his under-appreciated turns as the son tortured by his father’s greed in Dramaworks’ All My Sons and as the troubled husband dealing with a mentally ill wife in Mosaic Theatre’s Side Effects.

His George Love is totally plausible as he superciliously narrates to us his techniques without a shred of remorse, virtually claiming that these sheep’s willful naiveté makes them deserve to be shorn. He even makes his rationalization credible when he says, “It’s a surgical operation…. I’m never cruel.”  So it is even more surprising how effective Ballard is at exposing an interior as tormented as his exterior is smooth – as well as George’s own surprise when some of those facets emerge into the light.

Brownell is a chameleon. Her dowdy plain milliner is unrecognizable from the shallow vain princess in Dramaworks’ Exit the King or the handsome wife in the Maltz Jupiter Theatre’s Dial M For Murder. Adelaide’s demeanor evolves from a giddy openness to crippling vulnerability to, well, again, we don’t want to spoil anything. But she nails one wordless moment when suspicion clouds her face for the first time, a look that expresses volumes as the previous unimaginable betrayal insidiously infects her joy.

As always, the physical production is flawless from Brian O’Keefe’s period perfect costumes including some of Adelaide’s skillfully made hats, to Don Thomas’ nimble lighting, to Richard Szcublewski’s environmental soundscape, to Jeff Modereger’s scenic design of sliding panels that look like a newspaper’s engraving of a commercial in London or the seaside resort where much of the play occurs.