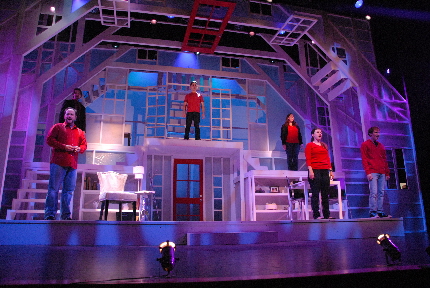 If the 38th annual Carbonell Awards honoring theatrical excellence in South Florida are considered a mirror by some, the nominations released today provide some interesting material for observers to chew over.

The awards will be handed out March 31, but the 99 nominations for 34 shows seem to depict a very healthy year for musicals and a less impressive number of new works produced, quality notwithstanding.

The Wick Theatre, which opened this fall in the expensively-refurbished site of the Caldwell Theatre Company, mounted two eligible shows that received praise, especially its debut production The Sound of Music with earned a best musical nod, Local actresses scored nominations in supporting roles, Lourelene Snedeker as the Mother Abbess in The Sound of Music and Missy McArdle as the sassy inn manager in White Christmas.

Thinking Cap Theatre, Nicole Stodard’s troupe that tends toward cutting-edge productions, also took a nomination for Stoddard and Chastity Collins’ costume design for a mashup of 17th Century dress seen through a punkish sensibility in The Rover. Outré’s much praised production of An Iliad, a one-man tour de force with Avi Hoffman, received a nod for Danny Butler’s sound design. The Plaza Theatre, also in its early stages at the old Florida Stage site in Manalapan, received a nod for the ensemble in its revival of I Love You, You’re Perfect, Now Change.

One sign of the strength in the season is that the judges nominated six nominees for best musical rather than the usual five: Annie at the Maltz Jupiter Theatre, In The Heights at Actors’ Playhouse, The Longing and the Short Of It at Arts Garage, next to normal at Slow Burn and Thoroughly Modern Millie at the Maltz. The directors of each of them were nominated and most of them provided nominations for various cast members, designers and creative staff.

Another issue is how much new work is being produced locally. Only two titles were nominated for five slots in the new work category: Christopher Demos-Brown’s Fear up Harsh and  Israel Horovitz’s Gloucester Blue at Arts Garage.

But the Carbonells were not necessarily an accurate bellweather because two acclaimed productions were not considered. First, The Longing and the Short Of It may have been its first fully-mounted professional production and it may have been nominated for best musical, but Tyrrell agreed not to call it a world premiere so that the show would be attractive to a second production somewhere. Carbonell rules state that the production must be billed as a world premiere to be considered for best new work. Reportedly, the same problem has arisen for its current production, Carter W. Lewis’ The Hummingbird Wars.

A second contender, Blow Me, Jessica Farr’s new surrealistic script at Mad Cat Theatre about fashion icon Isabella Blow, received wildly varied reactions but lead actress Erin Joy Schmidt received strong reviews. The work was not allowed to be considered in any category including best new work by the 12-member judge panel because the six nominators sent to the show (a pre-screening group) did not recommend it to be considered.

(Full disclosure: I am a Carbonell judge or nominator and have been for 15 years.)