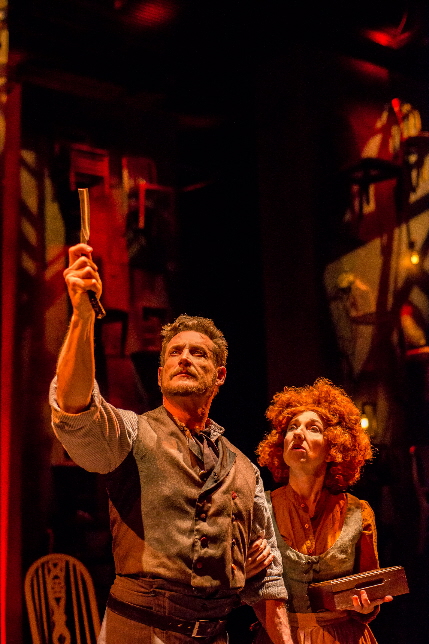 Amid a backdrop of changes and challenges, the Carbonell Awards nominations were released Tuesday morning recognizing excellence in South Florida professional theater.

Most notable was that Palm Beach Dramaworks, approaching its 20th season, not only earned the most nominations of any company – 29 in 16 out of 20 categories – but multiple nominations for every single one of its main stage productions in 2019: A Streetcar Named Desire, Fences, The House of Blue Leaves, The Spitfire Grill and the world premiere of Ordinary Americans in a co-production with GableStage. No other company has amassed so many nominations in at least a decade.

To read a complete list of Carbonell nominees and breakdowns by county, show and company click here.

But the nominations also voted to recognize more intimate work by smaller companies like Primal Forces producing small cast dramas in a storefront in a strip shopping center in Boca Raton and West Boca Theatre Company based inside the Levis JCC. New City Players, operating out of a converted church in Fort Lauderdale, racked up five nominations connected to its scorching A Raisin in the Sun as well as Falling about a family dealing with an autistic adult.

Notable, too, were the twin nominations in the Best New Work category for two world premiere plays written by Ronnie Larsen: Grindr Mom, a wry and touching monologue delivered by a Mormon mother dealing with her son being gay, and An Evening with John Wayne Gacy, a bracing surrealistic play in which Larsen starred as the serial killer on the evening of his execution. Larsen is much better known for writing, directing, acting and/or producing broadly comic gay-themed sexually-explicit plays.

Out of more than 80 shows that opened at participating regional theaters in 2019, 62 were eligible for consideration and 32 eventually received nominations Tuesday.

The awards program founded in 1975 also gives special awards for service to the community and funds scholarships to high school students interested in the arts and/or journalism. Applications for the Jack Zink Memorial Carbonell Awards Scholarships are currently being accepted. Get full information at http://carbonellawards.org/scholarships. The deadline to apply is February 3.

The elephant in the room was the Maltz Jupiter Theatre. One of the most award-honored companies in the region, its management requested in September that none of its shows be considered. City Theatre also asked that its Shorts programs be removed from consideration, although not its full-length plays, one of which did produce a nomination for Best Actress in a Play.

Their concerns included perceiving favoritism among nominators and judges, a lack of transparency of the board of directors, questioning the expertise of some nominators and judges in technical categories, unfairly giving more weight to smaller companies without the Maltz’s resources, and a lack of responsiveness to producers’ concerns.

Another company privately is weighing whether to stay in consideration and reportedly two others are disgruntled enough to have been discussing it.

Carbonell officials disagree with the validity of some of the concerns, although board president Don Walters has invited anyone to discuss them at an annual town hall meeting later this winter. Further, the board has made alterations to the system in recent years to address some concerns.

The company’s productions have resulted in numerous Carbonells from 2005 to 2018: 206 nominations (sometimes multiple nods in the same category in the same year) and 47 wins for an overall 23 percent win-loss record. It has brought home six awards for best musical, one for best play.

The most high profile change is that the ceremony will be held for the first time at the four-year-old 1,100-seat Lauderhill Performing Arts Center rather than the 582-seat Broward Center Amaturo Theater where the awards program has been held since 2001. Before that it was held at the Colony Theatre in Miami and the Crest Theatre in Delray Beach, among other locations. The ceremony is slated for 7:30 p.m. Monday, April 6 at the center at 3800 NW 11 Place, near the northeast corner of Sunrise Boulevard and State Road 441.  Copious free parking is available. Ticketing information for groups and individuals will be announced soon.

The awards have a decidedly mixed relationship with the theater community. Many revere the honor. It’s cited in resumes and playbill bios when recipients move out of the region, even when they work on Broadway. The theater companies frequently list their nominations and wins in news releases, promotional materials and grant applications.

But some resent the awards for several reasons included making artists competitive and questioning the validity of comparing wildly different productions in the same category.