The lead actors are adult professionals and it is not a conservatory production despite the copious use of children on stage. But yes, it’s primarily a vibrant children’s show infused with J.M. Barrie’s bittersweet meditations on childhood and growing up, themes that resonate with adults.

But it also is a testament to the wildly inventive and stylistic virtuosity of Rodaz as playwright, director, sound designer, lighting designer, set designer, costumer designer, composer and even playing the guitar live offstage.

The most impressive aspect is apparent immediately: The entire stage top-to-bottom is a slanted wall of frosty glass panels with errant strands of ivy held in place by a wood frame lattice, looking like one of those massive English greenhouses. The walls on either side are tall mold green weather beaten slatted panels.

In the dim light of the opening scene when the Darling children are sleeping in their roll on beds, we suddenly spot a form clambering over the glass near the top of the stage and finally finding a trapdoor in the edifice to slip through.

To be fair, the whimsical magic spell that Barrie’s novels weaves for adults exists in few stage productions, and it rarely appears here. But the magic that is cast here mesmerizing parents, guardians and babysitters is Rodaz’s stagecraft, vision and humor.

—When the pirates row their skiffs onto the stage, they actually slide on sitting atop skateboards.
—Capt. Hook wields a very British umbrella in his duel against Peter’s hand-made sword made of two pieces of wood nailed together.
—When Peter arrives in the Darling’s bedroom, his errant shadow that he chases is actually the shadow of Tinkerbelle’s left hand projected on the back wall as her right hand holds a powerful flashlight.
—The threatening jaw snapping crocodile are long parallel pieces of corrugated plastic like you find on a construction site, carried on by ensemble members.
—When the youngsters fly, they stand on stools on a dimly lit stage, looming over an array of ornate lanterns first to represent London and then reorganized to stand in for Neverland.

This sounds chintzy on paper, but in practice it is a joyful and overt celebration of theatrical ingenuity including the entire cast acting as a kind of Nicholas Nickleby narrating storytellers.

Rodaz, the 24-year-old son of Area Stage founders John Rodaz and Maria Banda-Rodaz, melds all of the pieces synchronously, especially what must be a hundred or more shifts in atmospheric lighting. He has been learning and practicing these crafts for a decade now, culminating in his recent production of Matilda and receiving a Silver Palms Award last year. The closest vibe we’ve seen locally are the visiting tours from the House Theatre of Chicago.

The acting is solid enough for a children’s production with Anjil Kaufman as an arrogant, heedless yet self-sacrificing Peter, Michelle Gordon as an incipient maternal Wendy, and Valeria Di Babbo as a Tinkerbelle recently escaped from a New Age cult. But the one performance that lands with style and verve is Rodaz regular Katharine Duerr as a slender, animated and female Capt. Hook even though she wears an Edwardian suit and bowler hat. Some actors, both adults and children, do slur some of their words.

The production itself is the last “adult” show in the company’s Riviera Theatre space before it moves to a temporary home two blocks south in the Sunset Shopping Center in April. The company will produce its last conservatory production Oliver in March.

The show only runs two more weeks. If you miss it, don’t despair. What this, plus Rodaz’s work on Matilda and his age promise are decades of fascinating projects. 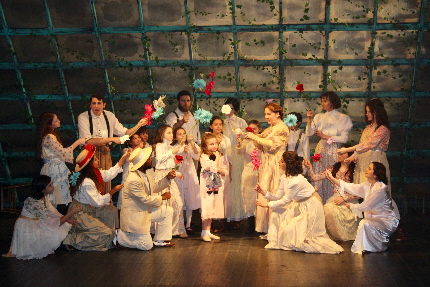