The dusty attic still sits there in the gloom, crammed with the abandoned debris of a family’s life, illuminated primarily by an old chandelier and the lone bare light bulb on a pole.

The set for GableStage’s production of Arthur Miller’s The Price still stands undisturbed 16 months after COVID prematurely cauterized the production. It was the last one that the legendary Joe Adler had begun rehearsing, unofficially planned as his swan song as a director. Instead, the pandemic sidelined it and Adler died the following month.

But echoing the resurrection of local theater, the new artistic director Bari Newport will inaugurate GableStage’s 2021-2022 season in November directing Adler’s The Price.

Not Newport’s The Price. Adler’s. She is using use Adler’s written notes, Adler’s blocking, his technical and design crew who were already far along on the project, an assistant director who was present in the room in 2020, and three of the four actors who had been in rehearsal, losing only one because of a conflict.

The adherence to Adler’s plan in the new run is meant to honor the legacy of one of the key figures who developed South Florida from the home of dinner theaters to a national reputation for challenging work.

“The most important thing anyone can do for his legacy is to reopen the company,” Newport said last week from her office at the Biltmore Hotel in Coral Gables.

“Number two, (the goal is to) continue to provide work of artistic excellence and to scale the company up to the national echelon that it deserves to be on.”

While she has developed her own perspective over years in the field, her vision for the renewed GableStage goes far further than personal preferences. “I’ve never been someone that was like, ‘Oh, please, let me start Bari Newport’s theater company. I would have done that a long time ago.… It’s always been about continuing the story of a company that has unique, vibrant, colorful roots, because I really, really look at it as part of an American regional theater ecosystem, which has always been my driving force of what regional theater is in this country.”

The result is a menu of upcoming titles for a 23rd season that does reflect Newport’s sensibilities, but also insights from considerable continuing conversations with hundreds of local patrons and artists. The new paradigm also features a raft of non-aesthetic changes including more titles per season and more performances for each title.

The schedule announced this week encompasses:
—kicking off the season with a special one night only fundraiser Splash at the Biltmore pool, a synchronized swimming extravaganza ala Esther Williams Oct. 28.
—- Arthur Miller’s The Price (November 12 – December 12).
—-  the world premiere of Joe Papp at the Ballroom (December 17 – 31), a play with music starring actor-director Avi Hoffman recreating the famed impresario’s only public concert during which he recounted his background and his artistic process,
—- the Florida premiere of award-winning poet Claudia Rankine’s first published play The White Card (January 14 – February 13, 2022) which investigates racial divisions,
—- the world premiere of a two-person musical, Me Before You (February 25 – March 27, 2022) about a performing couple whose marriage is tested by political events,
—- the Florida premiere of Jessica Provenz’s Boca (April 22 – May 22, 2022) follows a group of retirees who – between golf, bridge and Botox – can be found bickering, gossiping and living it up like they’re teenagers again,
—- the dramatic comedy Fade (June 3 – July 3, 2022) rooted in Hispanic characters and is directed by local multi-faceted artist Teo Castellanos,
—- as a special season add-on production beyond the regular subscription, the world-premiere of Rubenology, The Making of an American Legend (July 14-31, 2022), written by local playwright Vanessa Garcia and actor Ruben Rabasa who leads the one-man autobiographical show.

That’s seven scheduled events in about nine months as opposed to fewer productions over 12 months. The slate adds two Wednesday performances a week, bumping the number of performances for each show from 20 to 31 – leading to a shorter dark period between productions.


SIDEBAR: For a full description of the titles, artists, dates and ticket information, click here.
The eclectic contemporary fare echoes what GableStage patrons have supported for 22 years, but represents Newport’s ideology as well.

“What’s of interest to me on that level is just how to marry what my sensibility and taste is with the mission of the company.  And I think that what we’re trying to do with this season is kind of an alignment of both of those things.”

Part of the mission is “specifically to challenge South Florida’s multicultural audiences with work of artistic excellence that confronts today’s topics and ideas.”

GableStage has always been connected to that diverse community, devoting its preview productions to socially-conscious organizations and providing free performances to tens of thousands of school children. But being part of and inside a specific identified community is a core priority for Newport on multiple levels.

“The role of community engagement is the most important role of all. It’s not just about partnerships with schools. A theater company whose mission is to examine topics and issues of today begs the question of finding deeper ways to engage with its community and with the work itself.” 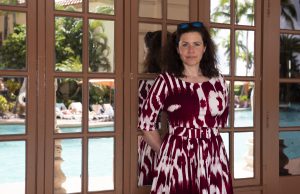 But patrons will notice some differences. Apparent in the schedule is that Newport will be directing The Price and possibly the musical, but she is farming out the other works to other directors. Adler directed most productions until illness began to take its toll – in addition to the pressure of managing the company.

But in addition to the considerable demands of being a new leader restarting a company post-pandemic, Newport believes the role of “producing artistic director” requires attention to the first word in the title, overseeing a wide range of responsibilities, including new full-time employees recruited to do marketing and fundraising.

She likened it metaphorically to managing a construction project. “The whole thing is like a miracle to happen at all. (But) for me, there’s artistry in all of it. There’s artistry not only in putting the season together, but making the season sing and making sure that there’s a (fiscal) reserve in the bank and my main job as a theater missionary.”

Among the uncertainties is COVID. The company has updated the air conditioning systems in the house and the dressing rooms, installed UV lights to sanitize and remove airborne pathogens, upgraded all air filters for the entire theatre space. The guidelines mandated by the Actors Equity union are “doable,” she said. But will patrons be willing to sit in the modest-sized house next to each other? What about Variant D?

“I kind of say, well, I’m not a fortune teller, right? I mean, things could change, right? I don’t know any more than the next guy. Okay, so we’re moving forward just like everyone else and planning for a fall season with full houses. You know, that’s cool, but we’re opening in November.”

The other silent 500-pound gorilla in the conversation is the county’s effort to resurrect the Coconut Grove Playhouse and the plan for GableStage to be its resident company and site manager. Appeals and judges’ rulings this summer have sent the project into uncertain territory once again.

Newport is aware of the controversy, but she waves away the topic as hardly a priority on her current to-do list.

“I’m only interested in reopening GableStage, which is truly a Herculean effort. What everyone needs to focus on is a very ambitious season that I’ve laid out, right? What everybody wants is the company to be strong, (for) Joe’s legacy to be honored. If the Coconut Grove happens, God bless it, that, too, would honor Joe’s memory in an enormous way because he fought so long and so hard for it. But my focus and the company’s focus and everybody’s focus is on making sure that GableStage, the 22-year-old beloved theater company, reopens strong and fierce and is able to grow.”

To read a earlier feature on Newport’s arrival, click here.