Ground Up & Rising Rises Again This Weekend In Miami Beach 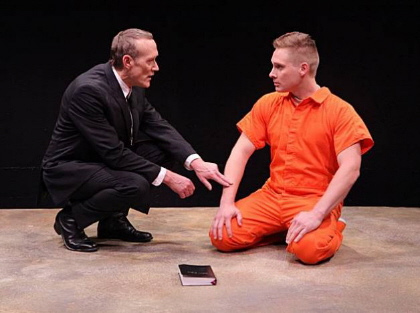 A scene from the original production of 9 Circles at Marin Theatre Company, to be performed by Ground Up & Rising this weekend.

Ground Up & Rising, the itinerant Miami company that has been rising and falling and rising since 2006, is rising once again with a play to bow during the holiday weekend, plans for a second production this season and the announcement of a new artistic director.

The company is the brainchild of several people, most prominently Arturo Rossi who has appeared in local productions including GableStage’s The Motherf***er With The Hat. The group performs topical, edgy works two or three times a year in various locations around Miami-Dade County in bare bones productions that have generally been praised by critics and patrons.

Slated this weekend is 9 Circles, a scorching award-winning psychological thriller by Bill Cain (Stand Up Tragedy). The almost psychedelic 2010 play conflates Dante’s Inferno and the surrealistic experiences of a mentally-ill Gulf War vet accused of atrocities. Now on trial for his life, the unhinged soldier must navigate a labyrinth of commanding officers, public defenders, lawyers, preachers and military psychiatrists as he tries to discovers the truth and his soul at the same time.

In keeping with the theater’s desire to provide professional theater to underserved audiences, the first weekend’s performances are free at 5 and 7:30 p.m. on Saturday and Sunday at the Miami Beach Botanical Garden, 2000 Convention Center Drive.

Other performances are scheduled on July 12-13 and 19-20 at 8 p.m. Saturday and 2 and 6 p.m. Sunday at Artistic Vibes, a warehouse space at 12986 SW 89 Ave. in Miami near the Falls Shopping Center. General admission is $25, but free to patrons under 25 years old with government-issued ID. The July 20 performance at 2 p.m. will feature an ASL interpreter for the hearing impaired.

The play will be directed by Rossi and Christian Vandepas, Collin Carmouze and Valentina Izarra.

The second production scheduled for September is Dying City, Christopher Shinn’s 2006 drama that was a Pulitzer finalist. It posits that a year after her husband’s death in Iraq, a young therapist confronts his identical twin brother who shows up at her apartment unannounced. By turns a drama, a mystery and a bit of spook show, the play investigates bereavement and closure and the unreliability of memory. The production will be directed by Carmouze and star Vandepas and
Izarra.

Ground Up’s stated mission is “to widen our empathetic sensibilities and promote understanding amongst humankind.” To that end, Ground Up has produced such works as Jesus Hopped The A Train, The Last Days of Judas Iscariot, The Hate U Gave (The Tupac Shakur Story), The Pillowman and Gruesome Playground Injuries despite having a shoestring budget and no permanent home,

The company announced last week that it has named Carmouze as the new artistic director. Rossi, who held the post previously, will continue with the organization as executive director.