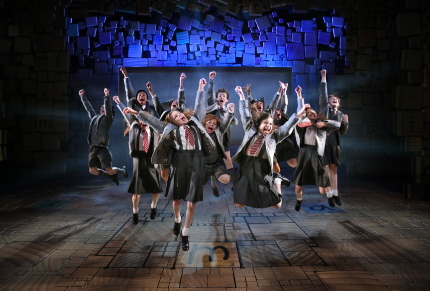 The students revolt in Matilda the Musical, part of the Kravis On Broadway season in 2015-2016

The wide range of theater available in South Florida – from Matilda to Medea — was underscored Monday with the announcements of 2015-2016 seasons for two very different but ambitious groups: Outré Theatre Company which is moving to Broward County and Kravis on Broadway, the national touring series curated locally.

It encompasses Outre’s version of The Threepenny Opera and Kravis’ hosting of the musical version of The Bridges of Madison County which failed to find a broad audience in New York but which enchanted those who did see it.

The theme of Outré’s coming season is “The Power of Woman” with productions focusing on the strength, seduction, and experiences of women.

Aug. 28-Sept. 13: The Threepenny Opera – is the Kurt Weill-Bertolt Brecht classic jazz-folk opera that invoked a wicked, dark humor to portray a depraved London underworld with its own pragmatic social mores as its follows the adventures of the cutthroat Macheath, better known as Mack the Knife.

Dec. 11-13: Thrill Me – A brief return of last season’s success, this two-person musical about Richard Loeb and Nathan Leopold, the infamous thrill killers of the early twentieth century. The show brings back Conor Walton and Mike Westrich in a show nominated for two Carbonell Awards. Not part of the regular season subscription.

March 11-27, 2016: Medea – Rarely done by commercial theaters in South Florida, Euripides’ tragedy is a bracing tale of a woman spurned by her husband for a younger woman, and the lengths to which despair and rage push her, told by Outré in a modern context.

April 8-10: Goblin Market — is another edition of Outré’s signature concert series in which potential full productions are tried out in a limited setting. Goblin Market, adapted by Polly Pen and Peggy Harmon from the poem by Christina Rossetti. Is a two-woman musical that follows two grown sisters as they return to their childhood home, where the goblins and faeries of their adolescence beckon them to leave the proper Victorian world behind and revel in the pleasures of the senses. Praised by critics and audiences.

June 10-June 26, 2016: Rooms, a rock romance — gets a full production following its concert staging this weekend Feb. 27-28, at the Stache Drinking Den, 109 SW 2nd Avenue in Fort Lauderdale. The punkish musical by Paul Scott Goodman and Miriam Gordon is directed by Sabrina Lynn Gore and stars Noah Levine and Erica Mendez as two young people struggling against the pressures of fame. Dealing with alcoholism, bulimia and unplanned pregnancy, they strive to find themselves and each other.

Season tickets and individual show tickets will be available soon by visiting the Broward Center of the Performing Arts’ website, www.browardcenter.org, or by calling (954) 462-0222.

The Kravis On Broadway schedule includes:

Dec. 8-13: Blue Man Group – With no spoken language, this veteran production of comedy and music is a startling and fresh visual brand of theater that has been playing in frequently updated versions in Las Vegas.

Jan. 5-10, 2016: 42nd Street – is the quintessential backstage musical comedy classic, a song and dance fable of Broadway. It features such Depression-era standards as “We’re In The Money,” “Lullaby of Broadway,” “Shuffle Off To Buffalo,” “I Only Have Eyes For You” and the title tune. This new production will be directed by co-author Mark Bramble and choreographed by Randy Skinner, the team who staged the 2001 Tony Award-winning Best Musical Revival.

Feb. 9-14: Motown The Musical—is a jukebox musical of about 60 iconic songs that served as the soundtrack of the Baby Boomers’ youth, formed around the story of how Berry Gordy founded and developed the Motown Sound.

March 1-6: Matilda The Musical – A Tony-recognized import from London that is still enchanting audience on Broadway. Based on the Roald Dahl novel, it tells of a surprisingly intelligent and gifted child with special powers who stands up against unimaginative and repressive adults.

March 22-27: Woody Allen’s Bullets Over Broadway – charmed audiences if not all the critics during its run on Broadway last season. This musical comedy version of Allen’s film tells of a young playwright who, in desperate need of financial backing for his next show, accepts an offer he can’t refuse from as mobster looking to please his showgirl girlfriend.

April 26-May 1: The Bridges Of Madison County The Musical – Far better than the book, far better than the movie, trust us, this is a glorious and thrilling musical by Jason Robert Brown (Parade, The Last Five Years) and Marsha Norman (The Secret Garden, The Color Purple). The one show on the schedule not to miss.

Subscribers for the Kravis On Broadway series will receive their renewals mid-March. Subscriptions for all six productions are $180 to $499 and will go on sale to the general public midsummer. For information about purchasing a subscription to Kravis On Broadway, contact the Kravis Center box office at (561) 832-7469 or (800) 572-8471, or log on to kravis.org/broadway.

This entry was posted in News and tagged Kravis on Broadway, outre theatre company. Bookmark the permalink.