Actors Playhouse’s Outstanding Next to Normal is Anything But 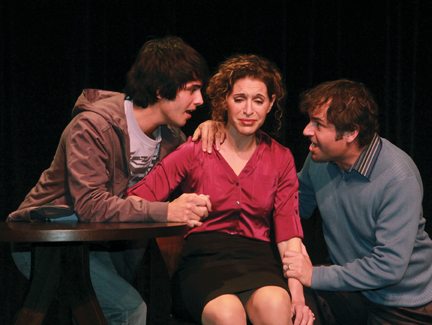 Or maybe God invented them just so someday we could be thrilled and troubled and moved and enriched by next to normal, Actors Playhouse’s finest work since Floyd Collins in 2003.

Artistic Director David Arisco long ago proved his expertise at staging mainstream crowd-pleasers and there’s nothing wrong with a purely entertaining evening.

But next to normal and a handful of atypically adventurous Actors Playhouse productions show that Arisco can mount sublime theater when he is inspired by challenging material and is teamed with equally skilled colleagues.

Don’t come expecting Hairspray or The King and I. This tale of a typical family struggling with the mother’s bipolar disorder not only won Tony Awards, but took the Pulitzer Prize for Drama in 2010. The fact that few musicals have won the Pulitzer eloquently speaks to the sophistication and insight of this near-masterpiece composed by Tom Kitt, book and lyrics by Brian Yorkey and shaped through three productions by original director Michael Greif.

In the Actors Playhouse edition, every aspect – the magnificent acting, the adroit direction, the music, the lyrics, the band, the lights, the sound – all seem transformed into the unified yearning of an outstretched arm reaching for salvation.

You may have heard the play is about “mental health,” “mental illness,” “over-medication” and “electro-shock therapy.” All true on a surface level. But next to normal is really about how ordinary people’s lives can be blighted by random fate and how their coping results not with a fairytale ending but hard-won hope as they launch into an uncertain future. Yet while we go with them on an emotional ride with shattering highs and lows, the creators have infused the show with a wry gallows humor that bespeaks the undefeated human spirit and buoys the audience through the evening.

The plot contains several surprises and the production imaginatively reveals points you expect, so we’re going to work hard not to spoil much.

On a familiar morning in suburbia, we meet Diana Goodman (Jodie Langel) who looks like your neighbor — pretty, perky and consumed with getting her family out the door. There’s her architect husband, Dan (Mark Sanders), rushing toward a very busy day, her typically petulant 16-year-old daughter, a promising classical pianist,  Natalie (Sarah Amengual), and her charismatic son Gabe, who is nearly 18 (Eddy Rioseco).

But tension percolates along with the coffee. The family sings “It’s just another day / and the morning sun is stunning / and you wish that you / were running far away.”

Suddenly, domestic bliss unravels and everyone’s plans evaporate as we realize that Diana is deep into a mental breakdown, one of scores of incidents encompassing delusion and depression during the past 17 years.

Dan is a steadfast pillar but it’s wearing on his soul as well. In fact, the entire family is suffused with a palpable pain. “They say love is blind, but believe me, love is insane,” Dan sings. The fallout includes Natalie’s inability to open herself to a romance with a besotted suitor, Henry (Ben Liebert).

Dan takes Diana to an earnest doctor (Nick Duckart) who prescribes yet another in an ever-varying regimens of drugs to ease her symptoms. She quips, “Oh, thank you, Doctor. Valium is my favorite color.” Each cure is worse than the curse; the nightmarish laundry list of equally debilitating side effects leads to yet another recipe of pharmacology.

Finally, Diana is so deeply medicated that she says, “I can’t feel anything.” To which, the doctor responds, “Patient stabilized.”

To say much else would ruin the family’s odyssey told in Yorkey’s smart script with unsparing honesty and profound compassion. About the only complaint with his book is a resolution which doesn’t seem quite credible.

Yorkey’s lyrics have a poetry that uses plain-speaking vocabulary to produce unforced metaphors. Occasionally, the lyrics border on cliché (perhaps that’s how these ordinary people express themselves) but the banality is obscured or even elevated when married to Kitt’s music.

That score is a blend of rock and pop with a dollop of Stephen Sondheim, an echo of Adam Guettel, a nod to Jonathan Larson, but in the end something unique that ranges from nerve-jangling to soaring, from atonal to melodious. Mirroring Diana’s condition, his melody lines often take a left turn you don’t expect.

Acknowledge Arisco’s leadership and vision. He has elicited terrific performances from this corps of actor/singers. His staging is especially effective, often interposing one character physically between two others to represent that character’s lingering effect on complex family dynamics. You’ll see what I mean.

Musical director Eric Alsford has longed to do this show since seeing it, twice, on Broadway, and he makes the most of this opportunity. The score often involves two or even all six actors singing differing melody lines or harmonies or vocal accompaniments. Alsford smoothly melds them like streams feeding into a single waterfall, yet with the separate streams still identifiable.

Alsford also conducts and plays keyboards in the orchestra visible at both edges of the stage. Their work was precise and nimble, negotiating songs of varying colors and providing almost non-stop underscoring.

And now, the cast. It’s a mixture of New York and Los Angeles professionals, many with close Florida ties like Duckart, a Miami native, and Amengual, who graduated from University of Miami in 2010 and immediately played Maria in the Broadway revival of West Side Story. Broadway and tour veteran Langel, who just played the narrator in the Maltz Jupiter Theatre’s Joseph and the Amazing You Know The Rest, recently relocated to teach at Oxbridge Academy of the Palm Beaches.

Every single one is superb and clearly in love with the work – fine strong singers who lace their voices with passion and their acting with a recognizable humanity.

First among equals is Langel who blesses us with a gorgeous liquid soprano that can convey fury, affection, anxiety, despair and hope, sometimes all at the same time. This is a killer role both in its emotional demands and its vocal requirements, but she is up to it. Exhibit one: Her take on the loveliest, heart-breaking song in the show, “I Miss the Mountains,” sung when Diana realizes that the medications are robbing her of the highs and lows that constitute real life.

But her finest moment is wordless. She carries in a birthday cake that we come to realize is yet another symptom of her disintegration. She stares at the blazing candles with a twisted grin that connotes terror rather than happiness, her face showing her interior struggle to deny unpleasant truths including the belief that hope is an illusion.

Sanders is perfect as the stolid if solid spouse so devoted to his lifelong love that his soul has been scarred. His warm baritone, often pushed into the falsetto stratosphere to express anxiety, gives the entire show a grounding. His penultimate number “I Am The One,” a duet with Gabe, is shattering.

Amengual has a preternatural talent for such a young woman. She has an expressive angelic voice living alongside an actor’s talent.  Her Natalie is a recognizable teenager struggling with the usual prickly mood swings but exacerbated by a mother who cannot give the affection and attention Natalie so desperately needs. Amengual delivers that push-pull of adolescent behavior that every parent recognizes. She is fine throughout, but the intelligence, fury and angst she invests in “Superboy and the Invisible Girl” is a standout moment.

Rioseco is equally impressive as a joyfully anarchic tempter and destabilizer. As the script demands, he and Langel have a close, almost sensual connection that the characters share with no one else. His rendition of the blazing “I’m Alive” is, no pun intended, electrifying.

Liebert also does a fine job as the quirky, nerdy but devoted boyfriend who refuses to be dissuaded in his patient courtship by Natalie’s rejection.

Duckart, outstanding in last season’s Masked, is equally good as the patient doctor trying to reassure Diana as treatment after treatment fall through. He’s such a fine dramatic actor that we forget what a fine voice he has.

The creative team members are all Actors’ veterans, but this is some of their best work. Patrick Tennent’s lighting is a marvel of the art, morphing every few seconds to enhance a scene’s intent and mood. Ellis Tillman’s costumes, seeming simple, perfectly express character. Gene Seyffer’s jungle gym setting of the bones of a house, made up of pipes and platforms, is as if an X-ray has exposed what goes on in the suburban house next door.

Special kudos are due to sound designer Alexander Herrin. After the disastrous sound at last fall’s Hairspray, the sound here is as crisp, clean and comprehensible as the aging hall, the cacophonous score and the singers’ sometimes imperfect diction allowed.

A last kudo to producers Barbara and Larry Stein for taking a huge risk with such a powerful and thought-provoking work. The artistic triumph of Floyd Collins was unpopular at the box office. Some of their patrons will not appreciate this choice either. A couple left at intermission on opening night muttering, “Horrible, horrible.”

I feel sorry for them.

Postscript: Pre-show talks with doctors from the University of Miami’s Miller School of Medicine Department of Psychiatry and Behavioral Sciences are scheduled before every performance at 7:15 p.m. & 1:15 p.m. on Sundays. Post-show talk backs with cast members, the director and UM doctors are scheduled on Jan. 22 and 27, Feb. 3 and 10. Patrons who have purchased tickets for other performances can attend the post-show talk backs with their ticket stubs.