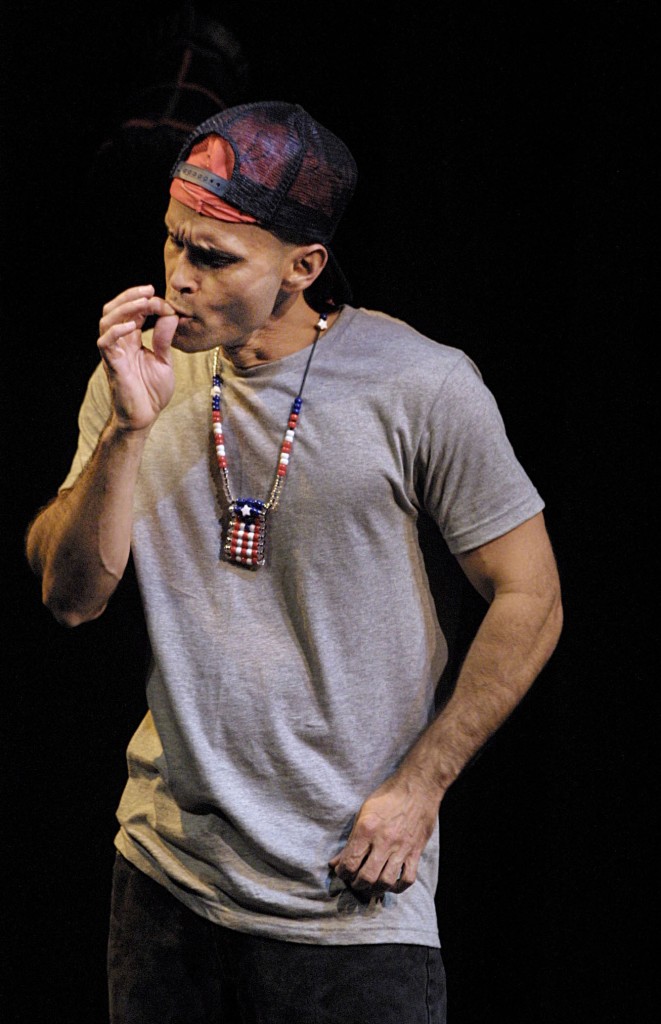 Who knew that a chameleon can have a voice?

But far more remarkable is his mastery of these diverse characters’ idiosyncratic sound: the vocabulary, the rhythms, the intonations and timbres – each resulting in a unique music.

While he uses those differences to depict how language stymies Miami from becoming a melting pot, he also shows an interconnected world of people who unknowingly share common aspirations.

This one-man show at the Arsht Center, funny and profound literally at the same time, is a sociological-anthropological field trip as if Castellanos was a hip-hop Margaret Mead. It takes us on a tour of the adjacent neighborhoods on the titular boulevard highlighted by encounters with a variety of inhabitants.

With a change of hat, footwear and accent, Castellanos transforms into a Haitian immigrant who drives a jitney and finds Wyclef Jean has changed most Americans’ prejudice against his countrymen, a Spanglish-speaking Cuban rafter selling coffee on the street in pursuit of the American Dream, an African-American street kid who rejects using the N-word, the elderly Cuban Jew teaching his grandson about tolerance.

Castellanos becomes a Puerto Rican marijuana dealer marveling at how his once down at the heels neighborhood of Wynwood now abuts the gentrification of the Design District. “There are more galleries around here now than crack houses,” he says with some regret.

Or he uses a pair of fuzzy pink houseshoes and a rhinestone-dotted head scarf to become a young black woman hanging laundry on a clothesline who belittles a friend named her child, “Rolexus” as adoration of  two symbols of wealth.

A particularly funny scene is a Rastafarian calling the police on the telephone, trying to get help for the tourist who has been mugged. His frustration at the dispatcher’s inability to understand his attempt just to pronounce the address (Not-Heast for Northeast) is both comical and unnerving. It is a dead on metaphor for the profound challenge facing Floridians hoping to work together for the future of the region.

Castellanos wrote the 75-minute piece 10  years ago and has been refining and updating it as he has performed around the world. He not only has an uncanny ear for voices, but subtly weaves in the serious examination of how the new multi-cultural America fails — but might yet work. Recent tweaks that would be lost outside Miami reflect the efforts to reclaim parts of the street for the wealthy, such as a throwaway line from the drug dealer in Wynwood that  “Tony Goldman is trying to buy up all the property.”

It’s probably unavoidable, but a large number of punchlines were lost on Anglos like me whose Spanish is limited to ordering in restaurants.

Castellanos is a beloved figure in the Dade arts world, having been born in Puerto Rico but raised in Miami and committed to mentoring local talent such as Tarell Alvin McCraney. He is the founder and Artistic Director of D-Projects and a coach for the Tigertail Productions Spoken Word Team. He was last seen locally in McCraney’s The Brothers Size at GableStage.

This entry in the Arsht’s campaign to produce local shows, Theater Up Close, is only here through Saturday but the shows may be sold out.