ALA’s ‘Love! Valour!’ Is Valiant, But Too Much of A Challenge 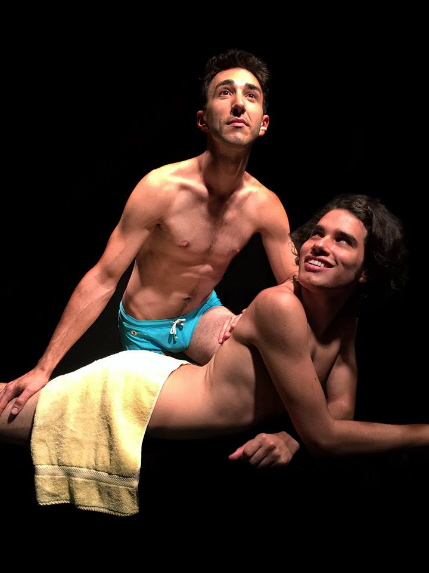 It’s been 20 years since any South Florida theater company produced Terrence McNally’s Love! Valour! Compassion! according to director Jerry Jensen in his program notes about the production that he’s helming at Andrews Living Arts Studio.

Jensen also discloses in the notes that he had played the role of Gregory in a 1997 of the play in Omaha, Neb. It’s apparent in so many ways that the director knows this play, yet this production comes off so drastically uneven.

Despite everyone’s sincere commitment, it starts out with a bang, then slowly disengages so that by the beginning of the third act (yes, this is three acts with two intermissions), it has petered out. The director does his best here, creating nice stage pictures, but the ensemble appears as if it could have used a few more weeks of rehearsal.

Granted, this show is a tall order. McNally’s script is so character driven that there’s barely any drama built in, except for some acts of adultery. Otherwise, it’s a lot of narration and slice of life of characters who can become difficult to become invested in unless the roles are played with enough depth that the audience is brought into their world. This didn’t happen in this production.

The play requires a cast of eight and McNally gives ample time for actors to flesh out their characters. The second night after ALA’s opening, the show ran 3 ½ hours. Settle in folks, if the rhythm doesn’t move along at a clip (which it doesn’t here), you’re in for a long night of theater.

For anyone unfamiliar with the plot, McNally’s AIDs-era play is about choreographer Gregory (Richard Weinstock), revered in the New York dance world (think Bob Fosse, Jerome Robbins, Robert Joffrey). He’s beginning to age, his body is broken and scarred from years of dance. He finds solace at his upstate New York house away from the madness of the city. He is dating a younger man, Bobby (Jason Fazio), a sweet-as-pie Texan, who has been blind since birth. He gathers his friends, all gay men, for holidays in Duchess County getaway – Memorial Day, the 4th of July, and Labor Day weekends.

Some of the friends are also involved with Gregory’s dance company, including Buzz (Rosseroni Parris), Gregory’s costume designer and AIDS activist who has contracted HIV. He’s an old soul who has memorized and lives in the fantasy of every Broadway musical and their composers’ canon from way back.

Other house guests include Arthur (William Smith), a teddy bear of a guy, and his boyfriend of 14 years – this is before gay marriage, remember – Perry (Ted Dvoracek). Perry is Gregory’s attorney.

There’s also John Jeckyll (Brett Watts), an arrogant Brit whose plays have flopped. His twin brother, James, a London costumer, the yin of kindness to John’s yang of meanness, who pops in. James is dying of AIDS.

John has brought a young dancer with him for the weekend, Ramon (Brayan Betancourt), an oversexed Puerto Rican who seduces Bobby early in the first act.

Island City Stage has proven that there is an audience for plays with a gay theme, especially those that are male-centered, and McNally’s choice to have full frontal nudity (and which Jensen keeps and the cast willingly obliges) also draws a crowd.

Each cast member brings a strength to the show, but as an ensemble, they exist in separate worlds, which creates much of the unevenness.

The actors take on their challenges. Fazio is a standout and natural as the visually impaired Bobby. Weinstock’s character is hampered by a stutter, but he plays it convincingly. When he tells the audience his speech impediment seems to stop when he’s in Bobby’s presence, you believe it. Watts in dual roles as the vile John and his kind twin, James, is able to shuttle through the two parts of “James the Fair and John the Foul” with ease. Parris as the musical theater-spouting Buzz has some of the best lines in the show and, at times, makes the most of them. Smith and Dvoracek as the devoted couple have good chemistry together and are at their best when playing off of each other. Betancourt as the young dancer-boy toy plays the role with a sly, sex appeal.

The flaws here outweigh the pluses, unfortunately. Valour! is a valiant effort, but ALA should have considered trying to cut the show down to its size. The little theater with a big appetite bit of more than it could chew.