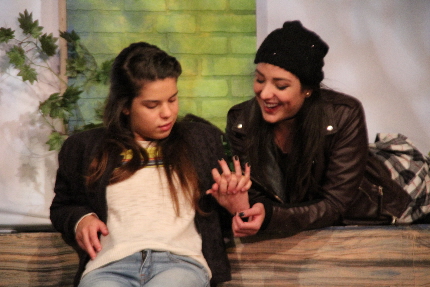 Perhaps the most impressive feat in the Harry Potter and Peter Pan outings are how scenes depicting a world of magic with complex rules and specific backstories are believably set down inside the “real world” of Muggles and Darlings. It takes a deft hand to enable the audience to suspend belief in recognizable environs rather than find such fare worthy of ridicule.

Happily, Juliet Among the Changelings, the inaugural full-length production from Lost Girls Theatre, succeeds most if not all of the time in establishing and staying in that difficult groove, producing a charming, humorous and thoughtful evening unlike much else you’ll find in local adult theater.

It unquestionably requires a receptive audience willing to buy in to this inventive but off-beat cross of light-hearted fantasy, creative mythmaking and contemporarily relevant morality tales. Imagine addictive fairy dust is being used by real world high school seniors to finish term papers and improve their skill at penning college applications. Patrons who cannot leave their cynicism at the door will be deeply disappointed.

The modest but earnest production works because playwright Andie Arthur, director Katherine Siegel and their cast never break faith for a second that all this is real, nor even a hint of a wink, even when someone reports that the football team ingested fairy dust to win the homecoming football game. They invest an absolute commitment to the reality of the fantasy, especially in portraying emotional conflicts such as teenage misfits’ unease, maternal concern, exiles longing for home, an adoptee seeking her birth mother, and a search for identity including sexual orientation. The evening is awash with both whimsy and relevant metaphors.

The key is to accept Arthur’s premise that fairies have often crossed a dimensional portal for centuries to kidnap humans known as changelings, whisk them away to a  not-so-perfect Fairyland and host them until some, for various reasons, either long to revisit their world or are banished for misdeeds.

Living in the woods of a small Ohio town, Juliet (Sofia Duemichen) is a 17-year-old adopted at birth by two such émigrés: the beaming Trudy (Courtney Poston), initially abducted in the 1950s and who still wears Mrs. Cleaver outfits with a string of pearls, and Lavinia, (Jennipher Murphy), an astringent magus abducted around the Revolutionary War who favors New Age or hippie attire.

Trudy keeps house by waving wordless orders to two pixies (Krystal Aleman and Paula Macchi) and Lavinia supports the household as an illegal dealer of something called “dust,” not angel dust but a magic powder just as addictive.

Both women, who are not normal humans anymore, wish to go “home” to Fairyland, although both had been looked down upon there as not being full-fledged fairies. They plan to take Juliet there before she can graduate from high school.

But Juliet has hooked up with the anarchic classmate Miranda (Diana Garle), a bright underachieving computer hacker with a foul mouth who sees a kindred spirit in Juliet as fellow outsiders. Juliet offers Miranda more magic dust if she will use her cyber skills to identify and locate Juliet’s birth mother. As that project ensues, the two fall in love.

Will the older women take Juliet away before she can find herself in the real world? How does Miranda figure into this? This plot and set up sounds more simple than a fairy tale. But Arthur imbues with complex backstories and a fleshed out mythology of traditions, rules and rituals.

Something in all this doesn’t quite land perfectly as an actual narrative happening before us. There’s a constructed self-conscious forced feel to everything from the writing to the directing to the performances. But it’s meant to be a story, a folktale, a myth, not Death of a Salesman.

The charm comes from the juxtaposition of people hailing from Neverland who can do magic but who are living in a mundane world of laptops and school bullies. Poston blithely motions to her helpers to do household tasks as if she was a suburban housfrau routinely instructing the maids. Juliet worries about finishing an essay for class but escapes detention by vanishing with the magic dust.

This does not work consistently all the time. Arthur, who is a devotee of fantasy novels and young adult books, seems seduced by the opportunity to create every facet of her own world. The audience gets overwhelmed trying to piece together each new invention.  Every facet is integrated into the plot eventually, but the detailed lore is parceled out bit by bit all evening like clues in a mystery – which makes it hard for folks to get comfortable early on accepting this fantasy. And yet, there are moments that go unexplained, such as what happens to one character in the final seconds of the play.

Another problem for any such undertaking is credibly depicting magic on stage with almost no budget and in such an intimate space at the Main Street Playhouse in Miami Lakes. Usually, you must rely on the power of theatrical magic to enlist the audience in discarding disbelief. Here, it doesn’t work that well and in the penultimate scene that involves shadow puppets to depict magical struggles and transformations, it just falls apart.

But Siegel and the actresses are in complete sync with Arthur’s vision and they unreel it smoothly. The beginning of a magic ritual in that aforementioned magic scene does work quite well in its staging and solemnity—until the puppets appear.

Duemichen’s performance starts sluggishly with Juliet so sullen, pouty and tamped down that it’s hard for the audience to plug into a character meant to carry us through the evening. But as the play progresses, Duemichen, a recent New World School of the Arts grad, warms into the role until we buy this 17-year-old dealing with unique situations such as being fitted with the Cinderella ballgown she will wear in another dimension. Better yet, as her Juliet begins to bond with Miranda, Duemichen lets slip a wry mischievous smile indicating the winning teenager beneath.

Garle is older than her part in reality but she is an experienced hand playing young people from her work at The PlayGround Theatre (now Miami Theatre Center). Her mouthy spunky sparkplug enlivens the show. She persuades you that she is a normal disaffected teenager deciding that the weirdness that magic actually exists is no stranger than the weirdness of the real world of 21st Century high school life.

The round-faced Poston puts across a beatific housewife with a cheery exterior that belies a quiet discomfort with both her past life and her present one. Murphy is equally credible as a soured survivor of centuries of watching human nature. But her dissatisfaction with the real world isn’t quite clear early enough to justify the horrific and inhuman lengths she is willing to go to get home.

One of Arthur’s strengths, which helps ground the fantasy in the real world, is her skill for droll and snappy witticisms.

Miranda says she doesn’t have Juliet’s cell phone number.
JULIET: I don’t have a cell phone.
TRUDY: Lavinia disapproves of technology.
JULIET: We’re barely allowed to have electricity in this house.
TRUDY: She distrusts it. Technology.
MIRANDA: Is she Amish?
TRUDY: Something like that.

But for all the talk of immortal fickle princes and the like, Arthur and company are tackling deeper issues using magic as a metaphor. Sometimes the metaphors are baldly obvious, some are just out of easy cognition. But they have not created Disney cartoons. Juliet quotes Lavinia soberly, “Everything is a trade. Nothing comes without a price.” Then there is the fact, treated straight-forwardly but without hammering at it, that all four characters are lesbians.

Given the shoestring budget and the modest venue, set designer Norma O’Hep de Jesus (love that name) has done a fine job creating a homey environment that triples as an autumnal wood, high school hallway and other locales just with a few added pieces such as a stand of trees and a free-standing locker door.

Lost Girls has been a company in the making for a couple of years, co-founded by Siegel and Arthur, who is also executive director of the South Florida Theatre League. Arthur has been writing short plays and drafts of longer ones that have been seen in staged readings sponsored by Lost Girls at venues around Miami-Dade-County