American Idiot’s Lyrics Are Often Unintelligible, But The Show Is Entertaining and Powerful 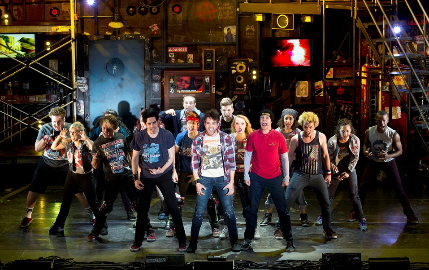 Buried under the profligate volume and frequently unintelligible lyrics, American Idiot remains entertaining for the unflagging energy of its performance and the power of its raw material, all rooted in youth’s millennial-old anger at the despoiled world they have been handed.

Based on the breakout album for punk rockers Green Day, American Idiot evolved into a 2010 hit that pushed the rock musical another step from Spring Awakening toward a presentational concert form.

The result was one huge middle-finger salute from the latest generation of disaffected young adults directed at their forebears and fate. Just like we Boomers did two generations ago with Hair.

As the opening songs says: “Welcome to a new kind of tension / All across the alien-nation.”

But American Idiot is notable on several fronts shaped by director/bookwriter Michael Mayer of Spring Awakening, Green Day lead singer/guitarist Billie Joe Armstrong, choreographer Steven Hoggett (Black Watch and Once) and orchestrator/arranger Tom Kitt (next to normal). First, the propulsive infectious score taken from the smash album and 21st Century Breakdown is, indeed, damn good music. Sometimes it’s as slashingly dangerous as a single-edge razor blade, sometimes as blunt as a sledgehammer being swung by a maniac on PCP.

Second, the lyrics, when you can hear them in the ballads, are surprisingly well-crafted, poetic and affecting, especially “Wake Me Up When September Ends.”

Third, Mayer and Hoggett have infused the piece with inventive theatrical staging rooted in traditional craft. Hoggett in particular, who is a movement specialist as much as a choreographer, has created a visual style echoing the jangling physicality of people thrashing with internal angst bordering on hellfire. The dancers writhe, jerk and kick in spasms as if they were martial arts experts with their fingers stuck in an electric socket. Another effective vision are two lovers in the throes of mutual heroin addiction, on their knees in an acrobatic pas de deux but connected by the rubber tubing used to bind their arms when they shoot up.

It cannot be overstated that 80 percent of the lyrics, easily 80 percent, were indecipherable – ironic given the volume. For those who are not Green Day devotees, it would have helped if, like the Florida Grand Opera, the plot was sketched out ahead of time in the playbill and if supertitles were projected above the stage. Fortunately, Mayer and Hoggett’s work is so evocative that you can still follow much of what is happening.

Which is: Johnny, Tunny and Will are young men filled with rage at the stultifying suburban life comprised of sitting on a couch numbed by television and anesthetizing themselves with copious beer swilling and recreational drugs.

They plan to leave for the big city and a career as musicians. But Will gets his girlfriend Heather pregnant and stays behind in an increasingly soul-numbing life that eventually drives her to leave with their child. Johnny and Tunny head for the urbanopolis and what ensues is related in Johnny’s letters to the friends and folks back home.

Tunny’s resolve soon falters. He joins the Army and is seriously wounded in the Middle East. Johnny hooks up with the lovely Whatsername in a relationship built on lust and a growing taste for heroin. Eventually, she kicks the habit, but cannot pull Johnny out of a self-destructive spiral fueled by a dealer St. Jimmy. What the musical never makes clear is that St. Jimmy is really a manifestation of Johnny’s id. Thank you, Internet. It’s every parent’s nightmare come true.

Eventually, the three chastened, wounded souls meet up back home and find some kind of separate peace with the chaos inside. How they do that and the exact nature of their resolution is a complete mystery unless you’ve memorized the lyrics and perhaps even then.

But undeniably American Idiot fairly depicts an honest cry of profound anguish that underlies its snide derision and profuse use of F-bombs. It is both an affirmation of a lifeview recognizable to its creators’ peers and an insightful field trip for anyone else who will open themselves to it.

That said, all the publicity is nonsense that this show will entertain a wide range of audience members. The only reason more people didn’t walk out was because there is no intermission and that didn’t stop some senior subscribers. Wisely, free earplugs are generously made available in the lobby for the folks with tint in their hair – blue rinse not magenta.

The cast, especially the dancers, throw themselves into the work with an enthusiasm and energy that makes you fear for their emotional health and their physical well-being. Standing out among the leads are Jared Nepute as Johnny and Robert Downey-lookalike Carson Higgins as the sardonic St. Jimmy. The five-piece band led by Evan Jay Newman may have the volume at 11 on a scale of 10, but they are drumhead tight.

Stay after the curtain call for an uplifting encore of the one Green Day standard not in the body of the show, “Good Riddance (Time of Your Life)”.

Regardless of the excess, American Idiot is an eloquent venting symbolized early on by a projected image of a score of American flags hanging upside down – the international distress cry for help.