Posted on December 6, 2018 by Bill Hirschman 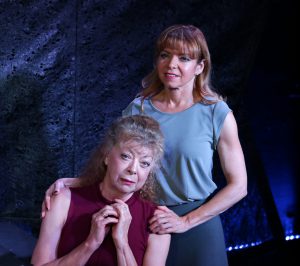 Her eyes blaze with anger, go moist with sorrow, overflow with pain and fear. Her mouth grins at her own witticisms, scowls with disdain at others’ cupidity, twists with disgust, drops open in shock at evidence of her mind’s deterioration.

Angie Radosh’s face, not to mention her body language, provides an unimpeded view deep into the soul of a writer battling an inevitable descent into the spiral of Alzheimer’s disease in Primal Force’s unnerving production of Breadcrumbs.

Along with Niki Fridh’s performance in Theatre Lab’s Tar Beach this week, Radosh’s tour de force provides another of the don’t-miss acting performances of the season to date.

Radosh inarguably has been one of the finest actresses in the region for more than two decades. Her baffling range has encompassed a pachyderm in a zoo in Speaking Elephant, the dying Joan Didion in The Year of Magical Thinking, the alcoholic sister in A Delicate Balance, the comic heiress in The Drowsy Chaperone, the cold unbending mother in Mothers and Sons, on and on.

In Jennifer Haley’s acclaimed script, Radosh plays an aging writer proud of her intelligence, exactitude, hard-won skill and contemptuous of the laziness that infects modern society. But her impatience with the failings of fellow human beings, and her long-stoked anger at a life filled with pain has leapt to another level as she struggles with the unavoidable fact that her precious mind is betraying her.

The amazing facet of her performance is seen when the play ricochets between the present to her memories of her troubled childhood that turned a sensitive little girl into the misanthropic recluse. Radosh instantly pivots physically, vocally and in mien from the hard-edged adult to the vulnerable frightened little girl and back again.

Haley (The Nether) presents Alida as a reclusive fiction writer whose abrasive manner dealing with other people clearly has been calculated over a lifetime to keep people at bay. But a thirty-something unmoored drifter named Beth insinuates herself into Alida’s life, offering to be a caregiver and later a researcher (as an excuse to be a caregiver).

As the months proceed, the women’s back stories emerge a few facts at a time. Beth appears in the reveries as Alida’s mother – two women defining their self-worth through their relationships with men.

But Alida with her eroding ability to process thoughts is the ultimate in an unreliable narrator as she tries to identify and follow the breadcrumbs of her life through the deep dark forest of her past.

Alida becomes increasingly suspicious of Beth who is pressing Alida to finish composing one last autobiographical story – dictating it if necessary. In one of several painful ironies, Alida’s lifelong love of words and their etymological origins is falling victim to a disease that eventually makes it impossible for her to construct cogent sentences.

Yet, thanks to Haley’s lyrical writing, Alida retains an ability to describe her evolution in internal monologues whose halting pace mirrors her battle to find the right words. For instance: “I’ve been having. Memories. They’ve been. Resurfacing. Yesterday morning. There was a leaf on the windowsill. A yellow leaf. And I realized. It’s Fall. It’s Fall again. The leaf looked like my hand. Reaching out. With all its veins. A yellow leaf. And I thought, maybe I should write my memories. Before my brain. Turns brown.”

Praise for Radosh is not meant to convey any less admiration for the outstanding work of Jacqueline Laggy as the Beth who is wrestling her own demons, and the seamless, fluid but carefully calibrated flow of the entire piece from director Keith Garsson who obviously helped mold the actresses’ work.

The split-second changes in time and place are made clear by the lighting design of Nicole DeCicco. For instance, the lights take on a red tinge when Alida’s mind is twisting in on itself.

Primal Forces, which has specialized in small-cast intimate productions, has bounced around various venues in Broward and Palm Beach counties. Currently, it has settled in for what is expected to be a long stay at the Sol Theatre in a strip shopping center on the west side of Federal Highway in Boca Raton.

One Response to Angie Radosh Gives Harrowing Performance In Breadcrumbs