Posted on December 8, 2018 by Bill Hirschman 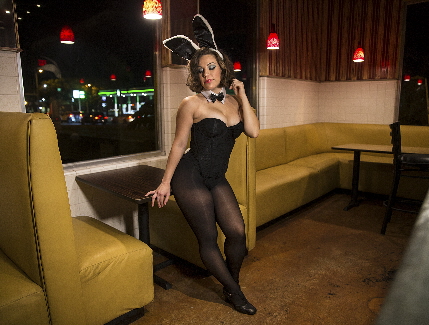 It’s the current age old question in theater currently. How do you get a younger demographic to go see a play? Well, if it isn’t Hamilton, it is difficult, sometimes impossible, to get those, let’s say, under the age of 40-somethings to a live theater performance.

But judging by the customer base at Saturday night’s Miami Motel Stories, the site-specific theater piece at the Gold Dust, formerly Motel Blu, on Miami’s 7700 block of Biscayne Boulevard, Juggerknot Theater Company is on to something. Maybe non-traditional theater is, in fact, the way. Juggerknot’s artistic director and founder Tanya Bravo says last year’s stories inspired a new crowd of “theater curious.” Juggerknot launched its first Miami Motel Stories in Little Havana last October, where it debuted at the Tower Hotel.

Seems as if the curious are back, as Miami Motel Stories has a sold out run through Dec. 23. This year, the company teamed with real estate developer Avra Jain, who has had her sights set on sprucing up what was, for a long time, a pretty sketchy part of Biscayne Boulevard. But, in 2006, Miami decided that a 27-block of Biscayne should be designated a MiMo (Miami Modern architecture) historic district, from 51st to 77th streets. In 2012, Jain bought The Vagabond, in the middle of that district, at 7301 Biscayne Boulevard, and saved it. In September of 2018, she picked up Motel Blu at 7700 Biscayne Boulevard, next to the Gold Rush nightclub, buying the two-story, 60-unit property for a reported $6 million. She plans to restore and renovate it and bring back the Gold Dust name.

While the renovation gets under way, Miami Hotel Stories has taken over the U-shaped hotel that had its heyday when The Playboy Club held court across the stree, with a grand opening on Dec. 21, 1957. And that’s where Juggerknot’s resident playwright Juan C. Sanchez’s second edition of Miami Motel Stories: MiMo picks up as Mr. and Mrs. Wade (Clint Archambault and Susie K. Taylor) are welcoming guests to their “new” hotel. In the different rooms, there are nine different “stories,” the plays.

First, let’s come back to the present, and go over some logistics of how this immersive experience starts.  Before getting immersed, there’s check in.
A key is your ticket into the experience. I was assigned a blue hotel key with the number 3 on it. This would be my group. So, my guest and I, and two other people who were assigned the same key at check in would see three short plays in specified rooms. The other keys are pink and yellow.

Check in, sit a while in the hotel’s lobby, which has a throwback neon sign that glows, Miami Motel Stories. It’s an obvious selfie spot. Beyond the lobby is the open-air parking lot with 1950s and 60s era cars, Caddies, Continentals, and even a VW bug, where the Tiki bar sells drinks.

An announcement instructs that the experience is about to begin and those with room keys need to get aboard the 1950s Miami Transit Bus, loaned from the Miami Dade County Department of Public Works. Three bellhops are the guides, each assigned to either the blue, pink or yellow group.

Hexagon markers on the ground are coded to your key. So, much like a Fast Pass line at Disney, you stand on the marker and are ushered into your first room. There are only four guests in each room at a time. After the play is over, your assigned bellhop opens the door and guides you to the next.

Let’s just say there are a lot of moving parts, and to the credit of everyone involved, and director Mia Rovegno, things go smoothly. Hard to imagine with nine plays happening at one time, plus some experiences for those who haven’t purchased play tickets, but can roam around on the first floor where there’s a speakeasy, a fishing deck, a diner, a Chivas bar (Chivas is one of the sponsors, along with a grant from the Knight Foundation to Miami Motel Stories), and a diner.

Since I only saw the three Blue plays, I can only speak to them as far as review purposes. There are also three Yellow plays, and three Pink plays. Behind the motel doors, the plays span years between 1957 and 2018.

First up in the Blue plays in room 226, a “today” play. Carla (Bianca Garcia) a social media influencer with 2,766 followers (not huge numbers in social media, really, and part of the humor), has arrived with her designer luggage and boyfriend Carlos (Robert Alaya) from New Jersey to explore South Beach. But Carlos has booked the room at the Gold Dust and Carla isn’t happy. “This is a sex hotel,” she screams, as she points out a nasty stain on the wall. But Carlos has a ring to give to Carla, and the proposal soon makes Carla feels as if she’s been booked into a palace. Both Garcia and Alaya talk to guests, and even asked for help with a video of their special moment. Alaya is funny and fearless as he flexes his muscles, does push-ups, and dances around in his underwear. Sanchez gives the two actors lots of comic moments in this contemporary comedy, and the pair are up for the task: “We’re going to go to Little Havana and see Cubans in their natural environment,” says Carlos.  The closer to this comedy comes from Carla when she realizes that she’ll have to come back to the Gold Dust to mark the anniversary of her engagement.

That’s the cue for the bellhop to open the door, and we’re on to the next. Down the stairs to the first floor to room 127. George (Victor Valdeon) has holed himself up in the Gold Dust circa 1961, pieces of paper are strewn on the floor, maps with push pins on the walls (kudos for all of the era scenery to Li Milian and Lee Harrison, Ana Maria Morales for lighting design, sound designer Sarah Vingerhoedt and costume designer Karelle Levy).

George is  an undercover operative who wants clearance to go to Cuba to promote democracy, and broadcast anti-Communist messages. He also wants large quantities of dynamite. But who is George, really? When someone from the real CIA shows up, there are a lot of questions. Edward (Carlos Alayeto) has his own set of lies, too. Is he really an agent high up in the intelligence community or an administrative assistant? There’s no fourth wall broken here as Valdeon and Alayeto play a cat and mouse game. To the credit of the playwright and the actors, you’ll feel like you’re immersed in the era of the Bay of Pigs invasion, and you really want to help poor George out.

Flash forward a little over two decades later, and in Room 129, a nervous Veronica (June Raven Romero) is having more than a meltdown. There’s spatters of blood on her dress, on the back of the motel door, and on the bed. Has she tried to kill herself? As the story unfolds, Veronica tries to reason through how she’ll get out of being arrested for murder when the police show up at her door. She was only trying to defend herself after she was targeted. Veronica doesn’t say, but the struggle most likely ensued because she is transgender. “I will win. Veronica lives in truth.” Romero has, what is in essence, one long monologue, and it’s a deeply emotional one at that.

Now that you’ve seen the three plays, bellhops usher you down to the first floor where you can continue the interactive experience. You’ll bump into ticket holders who only purchased a party pass, called Check In, so they haven’t seen plays, but are interacting on the first floor in the other more public areas.

First, stop at the Tiki bar where George (Jeff Quintana) has stories from the Gold Dust. Then inside the diner, Coley Campany as waitress Barbara asks you if you want a cup of coffee, then talks about her romantic escapades with hotel guests and staff. There’s also the resident feminist inside the throwback-era diner. Actress Thiana Berrick has guests join her in making protest signs, while peeping-tom teens Adam D. Crain and Brandon Hoffman try to get a glimpse at what’s going on across the street at the Playboy club, while leafing through a Playboy magazine. In one of the first floor rooms, Gregg Weiner is running a card game and talking about Frank and Dino. Beat him at Blackjack and he’ll give you a shot of Chivas. Take a seat with fisherman Luckner Bruno along the Little River. Stop in the office and gab with the anti-preservation commissioner (Vanessa Elise). Down the hall, Mrs. Wade (Taylor) has had a little too much to and she’s spilling secrets about her unhappy marriage. Characters are scattered throughout. We met a crying mother (Carey Brianna Hart) on the stairwell asking us if we had seen her son. The bellhops round everyone up to end the night, as they invite you to join Mr. and Mrs. Wade in a limbo and a toast.

There is a Twilight Zone ambiance that surrounds the whole kit and caboodle, even when things are contemporary, and, like George, the bartender says: “There are ghosts in the walls.” Believe him.

Juggerknot Theater Company’s Miami Motel Stories: MiMo is at the Gold Dust Motel, 7700 Biscayne Boulevard, Miami.  Thursday-Sunday, through Dec. 23.  Various times for All Access and Check In tickets. $45 for Check-In, $65 for All-Access, $75 for Night Cap, which includes plays, plus drink ticket, and live music on Friday and Saturday night late show. Regular All Access experience runs 90 minutes. 877-504-8499 or miamimotelstories.com.