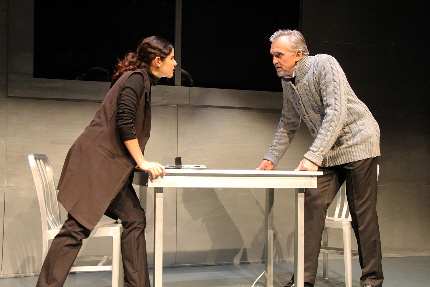 For a century, especially the past half-century, the popularity of fantasy and science fiction has grown exponentially because it fired and freed people’s imagination. But in the past three decades, the evolution of technology has enabled such flights to become ever more enveloping: beginning with text-based chat rooms to on-line role-playing games to current headsets that plunge you into 3-D virtual reality worlds.

But like the responsibilities discovered with development of atomic energy because no one thought it out beforehand, technological advances bring with them moral dilemmas, philosophical quandaries and ethical issues.

The Nether, Jennifer Haley’s acclaimed play given an impressive outing at Area Stage Company, posits today’s hedonistic urges catered to by the Internet and takes that paradigm to a logical extremity in the near future. In doing so, Haley and the Miami-based troupe raise questions we should be asking about the dangers of what we have wrought and whether being able to do something means we ought to do it. Haley and Area Stage don’t answer questions, but they ask ones that patrons should mull for a long time to come.

The premise starts with the creation of a desiccated dystopian future in which a highly evolved Internet known as The Nether has become an alluring and addictive playground. Businesses deliver imaginary environments that satisfy all five senses. Some despairing people are so disenchanted with their real lives that they hook into life-support systems and spend their entire lives as “shades” permanently in these fantasy worlds.

Already, this raises a seminar-full of issues about privacy, intellectual freedom, government regulation, self-actualization, on and on. But they are academic discussions. Haley brings them into inescapable bas-relief by imagining an erudite, cultured businessman Sims (perhaps of Sim City?) who has created an especially advanced Hideaway. It provides a dream world where pedophiles can act out their sexual fantasies with underage girls in the lush garden of a Victorian manor — as well as some even darker urges.

Sims is brought in for questioning by a newly-created government investigatory body which accuses him of molestation, rape and murder. Of course, these charges are actions that occurred in a cyberworld of megabytes and his imagination. In a dank, steely room, a young woman named Morris interrogates him, hoping to discover the location of his server so the authorities can destroy it.

The two spar over a raft of social, moral and spiritual issues. Sims (played perfectly by Peter Galman) is the very image of a civilized gentleman. He confidently believes what is he doing is defensible as the freedom to pursue fulfillment while providing pedophiles an outlet that protects society at large. He attacks the government’s initiative as an unwarranted affront to liberty and nature.

Morris (Samantha Dagnino) is horrified by the entire idea, but she responds with as many solid intellectual arguments as Sims has. Among them is that the Nether is not real life and we must deal with the challenges of the real world. But the nub is that some of Sims’ clients and perhaps Sims himself believe themselves in true loving relationships with these children — who themselves are clients’ avatars. So are these feelings genuine or commercial manipulation? Can you have genuine feelings and a true relationship in a world totally of your imagination? What if your partner in the dream is also a real person hiding anonymously behind a computer login?

But Haley is not satisfied to keep this a theoretical debate. The interrogation in the drab cell alternates with scenes occurring inside Sims’ verdant Victorian world. We see his seemingly affectionate relationship with his chief companion, the nine-year-old Iris (played by the flower-fresh Isabel Van Natta who is actually older in real life). We also meet Thomas Woodnut (Daniel Capote) a handsome young man exploring the world for the first time and becoming fascinated by Iris. These scenes are simultaneously inviting and extremely creepy – all the more so by another element that we won’t reveal here. Charles Dodgson never thought of Alice Liddell quite this way.

Finally, Haley presents scenes of Morris interrogating a client Doyle (Gil Kaufman), a nebbishy middle school science teacher who is emotionally wrung out. His real life is such a shambles that he wants to permanently abandon for this cherished fantasy world, but Morris is trying to get him to betray Sims.

The plot (which contains one huge chronological cheat regarding Doyle) contains inventive twists and revelations that we won’t spoil here, but the final tableau of the play is theatrically brilliant.

Director John Rodaz skillfully leads the audience through this twisting labyrinth of emotion and intellect laid out so unnervingly well by Haley. He manages to keep the audience mesmerized even though much of the play is two people seated across a table. It should be noted that scenes end seconds before anything untoward occurs on stage, but Rodaz has skillfully created the images in your imagination.

Dagnino and Capote are adequate but not remotely in Galman’s league; they cannot escape exuding the sense that they are “acting.”

But Kaufman is terrific at inhabiting the persona of a drab beaten down guy next door who can burst with passion at any possibility of betraying those he loves in the Nether and possibly losing the only joy in his life.

Van Natta fortunately is discernably just old enough and lovely enough to keep the audience from being completely creeped out. But her performance of a pre-pubescent peaches-and-cream girl with her curls tied in a pink ribbon and carrying a bunny doll is outstanding. Her Iris is a dream of gentle and nurturing compliance without a shred of self-consciousness about what will happen. And yet, there is just the tiniest glimpse in her performance and Haley’s writing of some anonymous player living behind this three-dimensional stand-in.

Leaving the best for last is the award-worthy work of Galman who makes the show worth seeing all by himself. With an almost aristocratic mien, silver goatee and sonorous voice, Galman creates a man who acknowledges “I’m sick” but believes he cannot be cured and that what he has created is a social benefit. More important, Galman makes Sims completely plausible in his belief that this is the natural fulfillment of who he is, which he genuinely believes is “right.” As Sims is increasingly challenged by Morris, Galman credibly cracks with explosions of anger, sorrow, fear and despair. It’s a bravura performance from the man who played the judge in GableStage’s Casa Valentina last year.

A quick nod is due Jodie Dellaventura’s set design which features a stunning “coup de theater” early in the show.

The Nether, which bowed around 2012, won the Susan Smith Blackburn Prize, the Francesca Primus Prize given by the American Theatre Critics Association (a group I chair), and has had productions in New York, London, Los Angeles with several others planned including Philadelphia.

Area Stage has been producing for more than a quarter-century in various incarnations and locations around Miami. For several years, it has focused on ambitious youth conservatory shows, but in recent years, it has added adult professional productions like this one which is about as far from children’s theater as you can get. Instead, Rodaz and company have gifted us with an unsettling, thought-provoking evening.