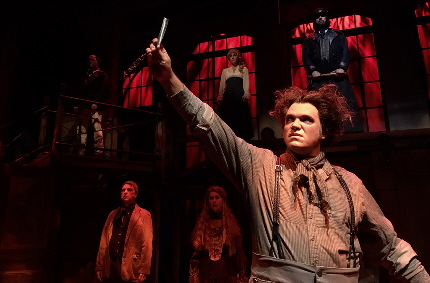 Faced with the near perfection of the original 1979 production of Sweeney Todd, The Demon Barber of Fleet Street, director Clive Cholerton balked at the prospect of taking on the Stephen Sondheim-Hugh Wheeler masterpiece, his “very favorite show.”

But he acceded when Palm Beach Dramaworks Producing Artistic Director William Hayes settled on it after months struggling to select just the right title for their ongoing series of summer musicals.

Complicating matters, Cholerton insists on bringing something new to his productions of classic musicals, such as last summer’s gender-bending double-casting of Dramaworks’ 1776, which garnered six Carbonell nominations.

So those who love Sondheim and Sweeney in particular should come with an open mind to this month’s edition expecting a different spin on the material.

In how it developed, there lies a tale.

Cholerton was wrestling to find a fresh vision of the early 19th Century British horror story about Benjamin Barker, falsely convicted by a corrupt and lust-obsessed judge who wanted to have sex with his wife and eventually adopt his daughter as a potential fiancée. Barker returns to London under the alias Sweeney Todd during the upheaval of the Industrial Revolution, years after being imprisoned in Australia. He is told his wife died of poison after being raped by the judge and that his nearly-grown daughter is in the judge’s clutches.

The initial epic-sized production directed by Hal Prince followed his bloody revenge in which throat-sliced victims are turned into meat pies sold by Mrs. Lovett, a baker who has a crush on Todd.

Although the show has been revived often (it’s currently off-Broadway right now with audience members given pies to eat), Cholerton doubted he could do better than the original. “It’s absolutely perfect,” Cholerton said.

But in an early production meeting, designer Brian O’Keefe showed preliminary sketches of costumes with a 21st Century steampunk vibe. Cholerton laughs now that he is of an age in which he was unfamiliar with the style. But the edgy anarchic ambience set the director to thinking.

“Steampunk is this almost science-fiction sort of genre but very much a fashion statement, a sort of almost apocalyptic universe in which everything is steam-powered” just as it was in the Industrial Revolution, Cholerton said.

In Prince’s production, the large ensemble representing the people of London are terrified. But Dramaworks’ rendition will explore a society not sanctioning Todd but feeling championed by this wronged man rebelling against a corrupt establishment.

Indeed, in previous versions, Sweeney lands in London instantly ready to pursue murderous revenge. But here his banked anger and submerged sorrow are only transformed by the news of what happened to his wife and child. Mrs. Lovett is less an equal partner in crime so much as an enabling inciting Lady Macbeth.

While the results are just as bloody and horrific, the new approach took some adjustment for Shane Tanner, the veteran South Florida actor embracing a role he has admired since he bought the VHS videotape of the Prince production for $80 while he was still in the Army.

“I thought it was going to be something like ‘The Barber of Seville’ but it just got me with more twists than M. Night Shyamalan,” he said.

Those original images and perceptions have posed “the challenge, knowing such an iconic show for so long, knowing every scene goes from point A to point B, and then having Clive say, ‘Let’s look at it another way.’ ”

Tanner has been prepping for the role for months, especially since he does not read music. He compensates by focusing intently on everything going on in rehearsals (“I get 100 notes and incorporate 90 percent of them”) and by trusting Cholerton and musical director Manny Schvartzman with whom he has worked before.

Tall, broad-shouldered with a solid baritone and welcoming round face, Tanner can play warm leading roles like his Carbonell-nominated hero in Slow Burn Theatre Company’s Big Fish. But he is just as well known for villains such as Bill Sykes in Actors’ Playhouse’s Oliver (where he met his wife Amy Miller Brennan), and his Carbonell-winning turn as the tortured Jud Fry in The Wick Theatre’s Oklahoma. He jokes that he and Sweeney share the same initials.

Sweeney is a huge challenge with its intricate score, but the passions are straight ahead, he said. “It’s just so much fun. It’s like mathematics: Once it clicks, it’s very simple emotionally,” Tanner said.

Dramaworks again is mounting a full production, not a staged reading. This one has 13 actors, Michael Amico’s ominous two-story Industrial Revolution foundry set and live musicians.

The latter have a particular challenge in that there is only a keyboard, cello, violin, multi-reed player and percussionist to create the overpowering sound often associated with the difficult score that rarely has the same meter three or four bars in a row.

Fortunately, several officially approved orchestrations for various size groups exist based on Jonathan Tunick’s iconic work. But Schvartzman has had to reassign musical phrases among his tiny group, such as looking at multiple available orchestrations with the reed player that will allow the musician to switch instruments.

The challenge is significant for Dramaworks in other ways. Its past season was critically-acclaimed for its artistry, but audiences were cool to some productions like the intricate Arcadia. The company has upped its social media and marketing strategies such as a pay-your-age ticketing for 18 to 40-year-olds in an attempt to attract a younger audience. The theater has posted see-through posters on its front glass doors and windows with the bloody logo for passersby to see — and then leaving the front doors open in the heat of summer to invite strollers to investigate.

And, hopefully, to attend the tale of Sweeney Todd.