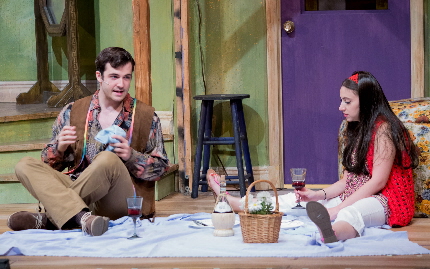 The script for Butterflies Are Free, a 1969 comedy-drama that most folks never thought they’d see again, holds up much better than you’d expect at its revival at Broward Stage Door where many patrons do remember having seen a previous production.

But while Stage Door’s edition under director Michael Leeds is a pleasant enough afternoon’s diversion of humor and emotion, it’s never terribly compelling and the whole thing could use more pizzazz to make it feel satisfying.

Leonard Gershe’s script about a young blind man striking out from his over-protective mother still works pretty well because it is laced with witty banter and its theme of young people trying to find independence from their parents still resonates.

The problem is it requires some extraordinary actors to energize the low-key proceedings, especially in the conflict-free first act. These folks are adequate but they don’t have that alchemical topspin that God gifts some people with and this show relies upon.

Set in 1969, Don Baker (Britt Michael Gordon), an aspiring singer-songwriter equipped with the de rigueur acoustic guitar, has been living in a funky loft in New York City for about a month. Until then he has grown up in a sheltered if loving household in upscale Scarsdale, nurtured and smothered by his matronly mother (Brook Packard). Baker is handsome, intelligent, quick with a quip and refreshingly self-deprecating. More importantly, while he is appropriately wary of the challenges he faces, he has a self-possessed confidence and an absolute lack of self-consciousness about his blindness – in fact, he abhors pity. In phone calls with his mother, it’s clear that Mrs. Baker is resisting untying the apron strings, but she is abiding by a pledge not to show up or interfere for two full months.

Don meets his 19-year-old next door neighbor, Jill Tanner (Gina Marie Jamieson), a seeming free spirit who has been through a hippie phase and a teenage marriage which lasted all of six days. Jill is supposedly a lovable kook whose quirkiness masks a deep fear of commitment and even balks at truly giving her heart to anyone. Of course, the two hook up within one scene of stage time and are soon having sex and trying to figure out if a relationship is possible.

And then, at the very end of the first act with the couple in their underwear the morning after, what you knew was going to happen as sure as gravity does happen: Mom drops in unannounced.

And that’s when the play really starts from a dramaturgical standpoint because finally there’s actual conflict on stage. The first hour has been the set-up.

After intermission, Mom tries to persuade Don to come home because she (a) fears he cannot survive and (b) she needs to be his protector. With a rapier-sharp wit, she shoots off dry zinger after zinger sniping at Jill’s suitability and reliability as Don’s emotional helpmate.

But the show’s traction up to then relies on the charisma of its two young leads to be irresistibly winning company. Gordon is suitably amiable, but Don is written to be laid-back and controlled. So that leaves Jill to be the engine for the first act. Jamieson is likable enough, but not distinctive enough. This was the role on stage that made people notice then wild child Blythe Danner and in the 1972 film version, Jill was kookiness incarnate, Goldie Hawn. Without that magic to enchant, Leeds moves the first act steadily but without much electricity.

Mrs. Baker is an equally tough problem. Packard is good at playing the uptight matron with the frozen face of polite geniality. But the part on stage and in the film were played by Eileen Heckart. If you know who she was, you know the role was tailored to her archetypal acerbic judgmental motherhood. But underneath the off-putting behavior, you sensed her genuine concern for her son. She was succeeded by Gloria Swanson; even better casting would have been Elaine Stritch. When Jill says she’s an actress,” Mrs. Baker says coolly, “What might I have seen you in besides your underwear.”

So Packard, clearly a solid actress, gets all of that in pieces, but not at the same time. Something doesn’t quite gel. She’s not intimidating enough to be a real threat to Don’s independence even though we’re supposed to feel the threat under her inspired brittle barbs.

It’s only as the play moves into the collisions of feelings and fears that this production begins to click, even touching the audience’s heart. Each character reveals facets of their character that we did not initially suspect.

One plus is that Leeds never lets the play remain static visually. People are usually in motion and Don even swings around the framework of his bed, which is about eight feet off the ground on stilts.

The late Gershe had some successes on Broadway and in Hollywood before and after, but nothing close to the commercial success of Butterflies, which played three seasons in New York and then became a staple of regional and community theaters.

It benefited from some snappy repartee such as Jill’s “Scarsdale. It sounds like a sanitarium where the do plastic surgery” or “I was going to go to UCLA but I couldn’t find a place to park.” Or when Jill stumbles over asking Don if he has read a book, he cites his Braille collection and quips, “Ask me if I’ve felt any good books lately.”

Theoretically, it’s a period piece, but only because of a couple of references to hippies, plus the hero wears a flowered silk shirt and leather vest, and the heroine injects the word “groovy” every once in a while. Otherwise it could take place any time in the past half-century including last week. But a shout out is due Michael McClain and Ardean Landhuis’ set, which has some nice touches like a peace sign painted on the wall and a stack of cassette tapes.

A last note: Andy Quiroga plays the small part of a pretentious off-off-Broadway director who has auditioned Jill for a part and who arrives at the loft to take her home with him. Quiroga is note perfect, setting up Packard’s verbal spikes like a professional volley ball player. We have said it repeatedly: Quiroga has to pay the family bills as a college educator but he’s one of a half-dozen grossly underutilized actors in the region.

He and Packard also get one of my 30 or so favorite exchanges in a comedy:

Mrs. Baker: I do not intend to pay money to see nudity, obscenity and degeneracy.
Ralph: Mrs. Baker, these things are all a part of life.
Mrs. Baker: So is diarrhea, but I wouldn’t classify it as entertainment.