Danny Kaye Musical Entertains But Danny Himself Is AWOL 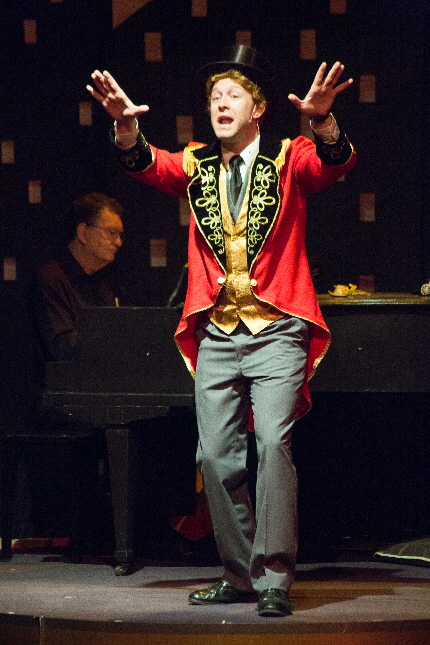 Josh Kolb as Danny Kaye in his breakout role in the Broadway musical Lady in the Dark, depicted in The Kid From Brooklyn at Broward Stage Door.

The Kid From Brooklyn, a bio-musical about Danny Kaye at Broward Stage Door, is blessed with strong singers, likable performers, a peppy period score, a fine live band, a few touching moments – everything but one missing element.

If you’re under 50 and don’t know who he was, you won’t miss him. This is a pleasant undemanding evening of entertainment, albeit couched in that inescapably false narrative voice of “and then he…” that makes everything sound like a Disney formula, absent much electricity.

But if you ever saw him on television or in films, Kaye’s absence is crippling. Not that Josh Kolb isn’t a reasonably talented actor working hard to deliver a diverting couple of hours, including mastering the tongue-twisting specialty numbers written by Kaye’s wife, Sylvia Fine.

But he isn’t Danny Kaye or even a reasonable facsimile. Which isn’t exactly his fault. Kaye was the definition of “inimitable.” Kolb has some of Kaye’s outsized gestures down pretty well and he has a good voice. But even a copper-colored wig can’t make him look like Kaye, plus he’s missing that vocal timbre that was a Kaye trademark, the impossibly facile face and he lacks that God-given charisma of which Kaye was the sole recipient.

Some real-life characters whom the audience watched for decades can be impersonated successfully both visually and vocally: Elvis, Zero Mostel in Zero Hour, Peter Allen in The Boy From Oz, Judy Garland in a half-dozen efforts, even Carole King in Beautiful. But the essence of Kaye is not just sui generis, but it simply cannot be done justice to.

The script was written by and directed by the experienced Peter J. Loewy who premiered the work at Stage Door in 2006, and headed other projects there such as the recent The Rothschilds.  The original outing starred Brian Childers, who had been playing Kaye for years, notably in a weaker property called Danny & Sylvia, which coincidentally was revived at the Willow Theatre in Boca Raton this winter.

The evening traces his life from vaudeville, a stint in the Poconos, then into nightclub work, then Broadway musicals, then films and on. During his early rise, he met and married Sylvia Fine, a talented composer-lyricist, who wrote work tailored to Kaye’s unique talents and eventually managed his career because he had little talent for business. Kaye was upfront that he was never a great actor, dancer, singer or even comedian in the traditional sense – he was a performer. But he had a slightly woebegone manic Everyschlub personality that people adored.

Loewy threaded throughout the script two dozen musical numbers, some just pulled from the period. But most are Fine-penned songs directly associated with Kaye such as “Tchaikovsky,” “Anatole of Paris”, “The Maladjusted Jester” and most notably, a first-rate rendition by Kolb of “Minnie the Moocher” featuring Kaye’s Byzantine scatting.

Loewy and company acknowledge in the second act that Kaye had faults and flaws (in real life, a more complex creature than what’s portrayed here) such as an affair with Eve Arden (one of several, apparently). But Kolb doesn’t show much emotional complexity or depth until late in the show when the world is falling apart around Kaye. And this kid from Brooklyn has no Brooklyn accent or any accent.

Kimberly Abrams, who was the heroine’s buddy in Stage Door’s recent The Most Happy Fella, does a solid job as the long-suffering Fine and she earns her turn in the spotlight with a beautifully limned “It Never Entered My Mind.” But her lines as our narrator just ring false as they do in almost every bio-musical. Ashley Brooke and Brad Rakushin enrgetically plays numerous secondary characters in their lives, most of the time as cartoonishly broad caricatures.

The music is the strongest element of the production by far, with all four actors delivering enviable performances thanks to the guidance of musical director David Nagy, who heads the band on piano along with Martha Spangler on bass and Nick Trotogott on drums.

The Kid From Brooklyn plays through April 9 at the Broward Stage Door Theatre, 8036 W. Sample Road, Margate. Performances are 8 p.m. Friday-Saturday; 2 p.m. Wednesday, Saturday and Sunday. Running time is 2 hours 15 minutes with one intermission. Tickets are $38 – $42 with $16 student tickets. Call 954-344-7765 or visit www.stagedoortheatre.com.