Despite Fine Moments, Guys and Dolls Doesn’t Quite Land 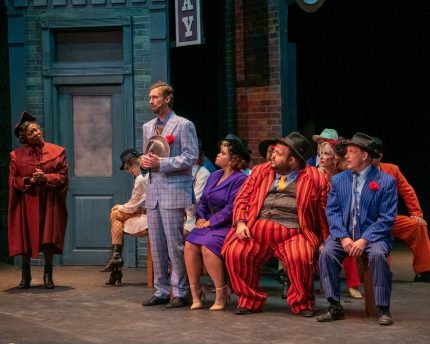 Despite being one of the 20 or so greatest musicals of all time, Guys and Dolls always poses a difficult make-or-break challenge that determines if a production is mildly entertaining or sublime.

The mythical environment is very specific and unique – Damon Runyon’s fantasy world of gamblers, hustlers, gangsters, crooks, cops, showgirls and street denizens — none of whom ever existed in quite this form. It’s never cartoonish, but still broadly comic.

All of these people think they are more worldly wised-up than they really are, which means most of them they can be morally compromised but remain lovable folks we want to cheer for.

So, MNM Theatre Company, which has given us some terrific evenings such as Man of La Mancha and Closer Than Ever, delivers some fine individual moments here and there, but they never find that elusive groove.

Still, you should celebrate Tommy Paduano as Nicely Nicely Johnson as he creates a genuine showstopper, leading the joyous roof-raising “Sit Down, You’re Rocking the Boat” in the Save A Soul Mission. You can enjoy Larry Buzzeo’s Nathan Detroit as he searches for a new gambling haunt and forestalls promises for his beloved.

And anyone who has been watching South Florida musicals for any length of time knows that Leah Sessa was born to play Nathan’s fiancée of the past 14 years, Miss Adelaide.

Still, MNM, a professional company in Lauderhill with a variable but respectable track record and an always enthusiastic troupe, comes off here as a cut or two above a community theater production. Fortunately, the 1950 musical has a brilliantly funny script by Abe Burrows (and a scrapped draft by Jo Swerling) and one of the great scores of American theater from Frank Loesser with a trunk full of great standards including “Luck Be A Lady.”

But director Jonathan Van Dyke (responsible for MNM’s fine Closer Than Ever and A Funny Thing Happened on the Way to the Forum) just can’t get most of his troupe to do justice to the material on the page.

One misstep is the casting of Sean William Davis as Sky Masterson. Davis was perfect as the preening egocentric Roman general Miles Gloriosis in Funny Thing and he has a sound voice. But he is a tall very good-looking blonde in his 20s who looks like he was president of a college frat. He does not look like, nor project the aura of a 30ish streetwise gambler and hustler.

Caiti Marlowe fares much better as his quarry, Sister Sarah, although the character itself is tough to make interesting most of the time. But when Burrows/Loesser allow it, Marlowe lets loose her lovely voice with a winning “If I Were A Bell” and in the hilarious duet with Sessa “Marry the Man Today.”

Take comfort that Sessa with red curls and a brassy tri-borough brogue is the standout throughout, from her Hatbox Club dance numbers to “Adelaide’s Lament.”

Among the most head-scratching errors in judgment is in reimagining visiting Chicago gangster Big Jule, usually a hulking Al Capone type, now here a tall attractive buxom blonde gunsel who happens to have a pistol. It’s not actress Colleen Pagano’s fault; she’s giving it all she can. But the character’s menace is crucial not only for several jokes to work, but for the lengthy comic scene in which the money-losing Jule forces colleagues into gambling with his/her dice which has no spots.

Among other problems: the singers and the band working under musical director Bobby Peaco are talented enough, but the score’s urban sharpness and verve is missing. Notes are often held a second or two when they should be precise and clean.

The choreography by Van Dyke and Jonathan Eisele is adequate but never thrilling and the execution by the ensemble members, not always in sync with each other, indicates a varied level of talent. Traditionally, the show opens with an extended fascinating wry pantomime of characters interacting across the streetscape as the “Runyonland” overture captures the audience. Not present this time.

MNM is rightfully proud that it hires primarily local talent on stage and in the pit or, as Producing Artistic Director Marcie Gorman said, at least actors with parents they can visit in Florida. As she noted, one of the company’s goals is to build up the South Florida theater community by providing opportunities.

Just a side note: Both the musical and the world it portrays not only never heard of #metoo, but never saw a hashtag except on a keyboard. Male dominance, misogyny, sexism, every sin in that book is entrenched in the DNA of this world. And yet, on partial balance, the script posits Adelaide and Sarah as the only blameless, admirable characters in the show. And those lyrics about “Marry the man today… and change his ways tomorrow” is of its time when one solution to making a hubby become more pliable is to have multiple babies. But it also depicts women who are clearly smarter and cannier than the men they plan to wed – and will likely not be anyone’s doormat.

Again, don’t misunderstand: There are reasons to see this production, but veteran fans have seen much more satisfying outings.

Guys and Dolls, from MNM Theatre Company, the City of Lauderhill, and North End Theater Company, will run through April 16 at the Lauderhill Performing Arts Center, 3800 NW 11th Place, in the Central Broward Regional Park on the Northeast corner of Sunrise Boulevard and State Road 7. Running time is two hours 40 minutes including a 15-minute intermission.  Performances are 2 p.m. Wednesday, Saturday, & Sunday; 7:30 p.m. Thursday-Saturday. Tickets are $45 to $65 and are available online at www.lpacfl.com or by calling 954-777-2055.

Covid policy: Masks are recommended but not required in the auditorium