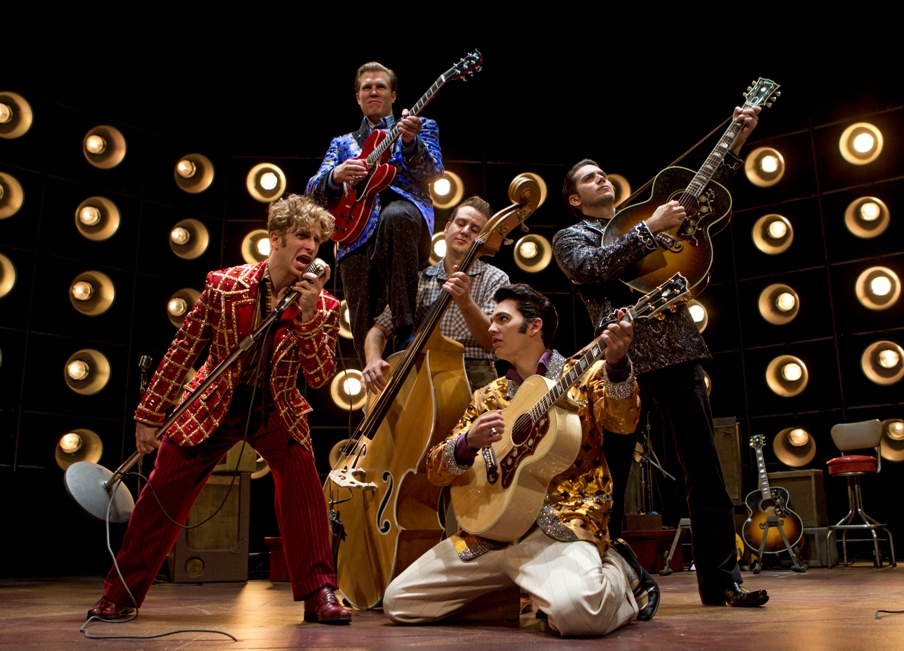 If Boomers wondered why their parents feared rock  ’n’ roll or their children wondered what all the fuss was about anyway, Million Dollar Quartet provides a visceral object lesson of the exhilarating danger, galvanizing defiance and the electrifying sexuality of rhythm and blues.

No record, no film, not the finest re-engineered CD nor re-mastered Blu-Ray DVD, nothing captures the insolent immediacy of the gauntlet that rock threw in the face of the Eisenhower Era so well as some of the live performances in this road  show at the Arsht Center.

The fictional recreation of a real one-time confluence of Sun Records stars in 1956 delivers paint-blistering guitar riffs by a stand-in for Carl Perkins, the manic piano pounding of Jerry Lee Lewis, the soulful baritone bass of Johnny Cash and hip-swiveling gyrations of Elvis Presley

Certainly, this jam session is a glorified jukebox musical with all the inherent weaknesses of the genre. Although its creators have laudably labored to create a plot-like situation, there’s too much heavy-handed exposition of a Biography Channel special for it to ever to win any playwriting awards. The temperature also dips from time to time if only because no show can be unrelieved propulsion.

But from the opening notes of “Blue Suede Shoes “(One for the  money, crash; two for the show, slam; three to get ready, slap; now, go, cat, go) Million Dollar Quartet is usually an express train joyously running out of control.

The recent tribute show Rain, while evocative, never gave you the feel of why The Beatles were a game-changing phenomenon. Million Dollar Quartet does precisely that by communicating the pulsating vitality that swept away much of the Greatest Generation’s tamer preferences (swing notwithstanding).

It’s a hell of an eclectic set list that enfolds “Matchbox,” “Great Balls of Fire,”  “Down By the Riverside,” “Party,” “Sixteen Tons” and “Long Tall Sally.”

Film director Floyd Mutrux (original concept, director and co-book writer with Sun chronicler Colin Escott) tries to set up as much tension between characters as possible to drive the show when no one is singing.

We’re dropped in at a watershed moment when pop music is emerging from what many thought might be a transitory fad of rockabilly, instead becoming a cultural power to contend with. Sun Records founder Sam Phillips (Christopher Ryan Grant) has had a hard-won success as a mom and pop record producer by identifying and developing raw talent, but his world is on the cusp of collapse. He has sold his contract with Elvis (Cody Slaughter) to RCA just to keep his company solvent. Perkins (Lee Ferris), with only one monster hit, feels Phillips isn’t promoting him enough and is getting restless. Phillips wants Cash (Derek Keeling) to sign a contract extension, but Cash knows Sun’s limited resources can’t take him where he wants to go. Elvis misses Phillips’ nurturing and RCA wants Phillips to sell them Sun Records so he can focus on Elvis.

Lewis (Martin Kaye) is a talented youngster whose braying bravado grates on everyone. Just to mix it up a bit, Elvis has brought along a sultry girlfriend (Kelly Lamont) who proves a pretty mean singer herself on “Fever.” As the night drags on, jealousies and resentments emerge, such as Perkins’ anger that Elvis is better known for “Blue Suede Shoes” than Perkins who wrote it.

You’re pretty sure an explosion is coming.  But while there’s a climax, there are no fireworks. As a result, Mutrux had to tack on a post-ovation “concert” to put a satisfying button on the evening, which it, indeed, does with “Hound Dog,”  “See You Later Alligator,”  “Riders in the Sky,” and “Whole Lotta Shakin’ Goin’ On.”

All of the performers are credible enough actors.  They wear the right clothes, have the right hairdos, know the right moves for Lewis and Elvis, but wisely, no one other than Slaughter is trying to impersonate their character and Slaughter really has no choice. The rest sound and look just enough like the icons to get by without anyone accusing them of trying to do Rich Little imitations.

Not surprisingly, Kaye is the crowd-pleaser as a vibrant cage-rattler Lewis, down to his signature arched back and foot-stomping. But the surprise is the quiet but commanding brio of Ferris who, of all the cast seems to be the most accomplished musician. His lead guitar licks are rock  ’n’ roll incarnate.

Grant makes a nice blustery Southern go-getter as Phillips who Mutrux has made the narrator of the evening, looking back on the historic evening.  He’s saddled with all the clunky exposition and he works hard to make it sound like he’s telling us a war story in a honky-tonk somewhere.

The show was directed by the Eric Schaeffer, best known for productions of Stephen Sondheim revivals at his Washington, D.C. , Signature Theatre. He hasn’t got a lot to work with here; it’s like assigning Richard Avedon to shoot family portraits at K Mart. But his skill does what he can with what’s here. His one misstep is having Phillips wave the audience into applauding each number as if he was a fourth-rate carnival barker or the warm-up comic before a late-night talk show.

I’m still aching for Broadway Across America to give us more new book musicals than glorified concerts. (Up next in Miami is Twyla Tharp’s dance show to pre-recorded Sinatra tunes, Come Fly Away.)  But why didn’t we get the national tour of Next to Normal? Why aren’t we on the initial tour of Book of Mormon? Why doesn’t someone bring down the revival of Follies when it finishes its run in Los Angeles? American Idiot is coming this year to Tempe and Raleigh, but not here.  It’s too much to hope for The Scottsboro Boys or Bloody, Bloody Andrew Jackson. Well, we can dream.

To  see a promotional video (but not of this cast), click here. 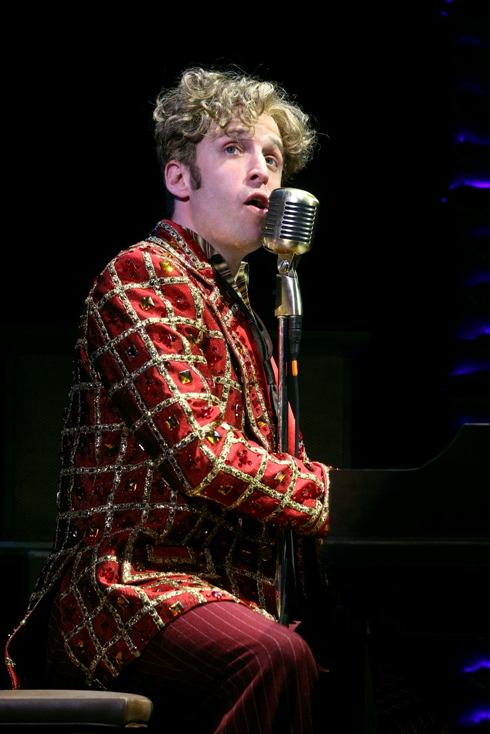