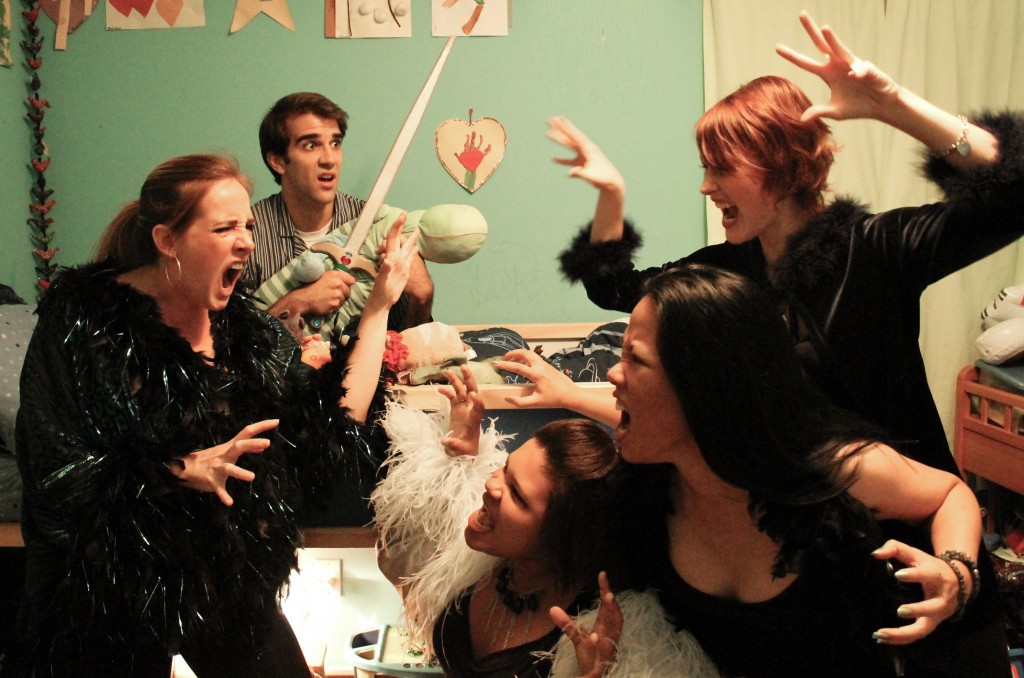 Mad Cat Theatre Company is quite right to warn that their new production of Macbeth & the Monster is not children’s theater, although children may enjoy the nonsensical anarchy.

It’s theater about being children, trying in theatrical terms to tell a story with a child’s delightful disregard for the constraints of logic, convention or even common sense.

Perhaps that’s injecting a little too much meaning in what seems another of Mad Cat’s patented nose-tweaking exercises in non-traditional theater. There appears to be as much serious intent in this absurdist comedy as there is in a Three Stooges routine. As always, a lot of audience members are not going to appreciate the acquired taste of a Mad Cat show, which frequently seems slapped together from a junkyard of parts; the challenge is always to just plug into its mindset and let go.

The script by Los Angeleno Angela Berliner of the L’Enfant Terrible Company depicts Shakespeare’s Macbeth radically re-imagined as a bedtime story told by a single mother and reinterpreted for us through the hyper-imaginative sensibilities of her child who is afraid of monsters under the bed. Their version is of a modern soldier out to slay the Loch Ness monster, but who is egged on by his mother into becoming a monster himself  by killing his king.

There’s likely some subtext about childhood fears and a mother working out her anger at being abandoned by her husband, but it takes a back seat to director Paul Tei’s aggressively off-the-wall style of storytelling seen earlier this season in Mad Cat’s so my grandmother died blah blah blah. For Tei, the obvious fakery of theater is not something to cover up but to celebrate with gimcrack production values, intentionally over-the-top acting and as eclectic a mash-up of styles as possible.

The three witches are a girl group trio who sing parody lyrics to “Boogie Woogie Bugle Boy” and the real lyrics to “Treat Her Like a Lady.” Duncan and Banquo are Muppet-like creatures operated by black-garbed puppeteers. Macbeth, a warrior in desert camo, is armed with a supersoaker. Lady Macbeth is the central character’s mother.  The fact that this makes little sense, nor even has a consistent internal logic, is way beside the point.

Once you accept that the exaggerated acting is precisely what Tei wants, you have to admire the fearless abandon that Mad Cat company members Erin Joy Schmidt and Joe Kimble invest in their performances as the pregnant mother and as a Macbeth that the boy conjures in the image of his gung-ho father supposedly fighting overseas.

Kimble, missing too long from local stages, has a wonderfully rubbery face that belies the deadly earnestness of Macbeth’s mien and becomes a source of giggles.

Schmidt, whose excellence as a dramatic actress was evident last season in Fifty Words and Goldie, Max and Milk, reminds us that she also has inventive and daffy comic chops. She always finds a way to twist a line reading or toy with a single word that sounds idiosyncratic yet real.

The rest of the cast is equally committed. Stephen Elliot Kaiser, a tall young man, dives deeply into the boy’s persona. He sits on the floor in patterned PJs and intensely pretends that his Captain Hook doll is battling a T-Rex while the audience takes their seats.

The girl group of Emilie Paap, Rachel Chin and Kathleen Robiou never wink at the audience as they provide a wacky Greek/Scottish chorus. Brian Sayre, a talented percussionist, provides much of the background atmosphere with the variety of sounds his drum set can make. Hannah Citrin and Giordan Diaz are the puppeteers, and the recorded talents of Stephen Anthony and Ken Clement give voice to the puppets.

Costume designer Leslye Menshouse provides a quirky wardrobe likely ripped of the racks at the Salvation Army. Matt Corey designed the sound and composed the music. The toy-strewn boy’s bedroom was designed by Elaine Bryan.

The show does peter out a bit at the end – not even an hour after the opening scene — and if there is a closing of the narrative loop, it’s not made clear to the audience what the moral of the story is.

But Macbeth & the Monster is a comforting reminder that while Tei may have moved to Los Angeles to pursue a screen career, he has made good on his promise to continue to return home to force us to expand our definition of theater.